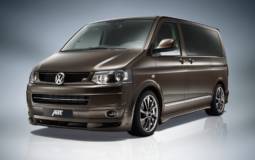 ABT is presenting its latest take on the 2011 Volkswagen T5, a vehicle which comes with styling upgrades as well as boosted performance.

Starting with the eye-catching features first, the ABT 2011 Volkswagen T5 has been fitted with a redesigned front bumper, a new front grille, custom side skirts, a new rear apron, a roof spoiler and a set of 19 inch wheels wrapped in performance tires. 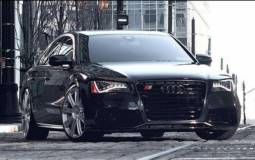 Another tuner who wanted to brag about its achievements in terms of transforming a new model into something more powerful and unique are the Germans from Hofele Design.

They call their program the SR8 and it addresses the 2011 Audi A8 D4 for which they developed a sportive suite and a software optimisation kit that will enable the 4.2-litre V8 FSI gasoline plat to jump from 372 PS to 390 PS and the 4.2 TDI CR unit to output a total of 390 PS and 900 Nm pe peak torque instead of just 350 PS. 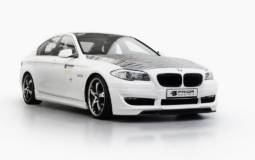 The 2011 BMW 5 Series also codenamed the F10 has received one of Prior Design’s first body kits. The tuner wanted to give the new 5 Series a sportier appearance, that is why they have developed a number of components that fit all standard models except the M5.

The kit includes a front add-on spoiler, a new set of side skirts, a small rear diffuser which accommodates the M3 style quad exhaust, plus a small carbon fiber roof spoiler. 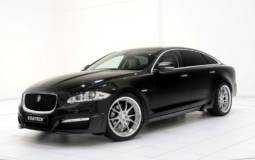 Startech has published new details regarding their refinement program for the 2011 Jaguar XJ. Without touching anything in terms of mechanics, the German tuner has taken the British luxury sedan to the next level by fitting it with an aerodynamic kit matched by a set of custom alloy wheels and by giving the interior a whole range of exclusive options.

The aero kit is made from OEM quality components and besides giving the car an unique appearance it also helps generate more downforce, while the three-piece forged wheels are measuring 21 inch in size and feature “mirror-polished surfaces and titanium-look sections”. 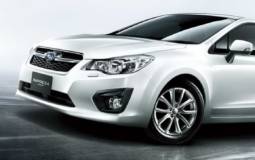 We are getting closer to this year’s Tokyo Motor Show, so Subaru is among the first to announce its vehicle lineup ahead of the official opening day.

The main highlight at their stand will be the Subaru Advanced Tourer Concept, a “Revolutionary Sports Tourer” which will focus on “Enjoyment and Peace of Mind” that wants to provide both superior driving performance and utility in the C class segment. 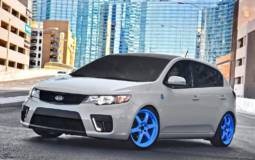 Among the many custom creations showcased at the 2011 SEMA Show these days, visitors will also be able to check out KIA’s sports-theme cars.

The automaker has created no less than six such vehicles which in some cases meant collaborating with West Coast Customs (WCC) and Antenna magazine.

The first is called the ‘Slam Dunk’ Blake Griffin Optima Hybrid and is a basketball themed car, based on the automaker’s first hybrid which features 20 inch matt black wheels, Griffin’s personal logo, a basketball-like paint scheme and basketball-court flooring at the interior. 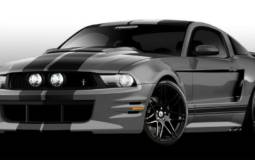 You surely don’t expect to see only tuned Camaros at the 2011 SEMA Show this week, as Ford has also announced its intention of bringing four customised 2012 Mustangs in Las Vegas.

These project vehicles want to underline the fact that Ford’s pony car is extremely customizable, and if you want to experience that for yourself you can check out the www.ford.com/cars/mustang link where you can create your own virtual 2012 Mustang. 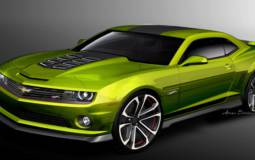 Among the many customised Camaros trying to attract visitor attention at this year’s SEMA Show, one of the coolest concepts will be the Chevrolet Camaro Hot Wheels inspired from the Spectraflame 1:64 scale toy released by Hot Wheels in 1968.

Both GM’s Design studio in Michigan and the Hot Wheels Design studio in California have joined forces in creating this special Camaro and some of the special features on it include the Over Chrome Green paint, satin black painted front splitter, side sills and rear side extensions, 20 inch satin black wheels highlighted by a Torch Red stripe, the Hot Wheels badging and the Euro style rear fascia and taillamps. 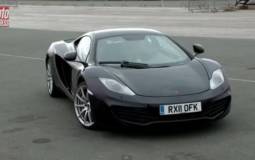 AutoExpress conducted their own test in which they lapped both the 2011 Ferrari 458 Italia and the McLaren MP4 12C around UK’s Anglesey circuit, in order to find out which is quicker.

Here is what these car’s are capable of in case you don’t already know their performance figures.

The Ferrari 458 produces 562 BHP and 500 Nm of torque from its 4.5-itre V8 via a 7-speed dual clutch gearbox apart from being able to accelerate from 0 to 60 mph in just 3.4 seconds the Italian coupe is also capable of reaching a 202 mph top speed. Unlike the McLaren, the 458 Italia comes with ceramic brakes as standard. 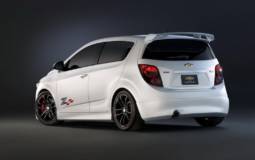 Just like every other year, North American automakers will take the 2011 edition of SEMA by assault with a wide range of customisation proposals based on current their model range.

Chevrolet for example is announcing the fact that its 2011 small car SEMA lineup will include four Sonic Z Spec models called the #1, #2, the 4D Concept and Dusk plus two special Cruze models called the Cruze Z Spec and Cruze Dusk.