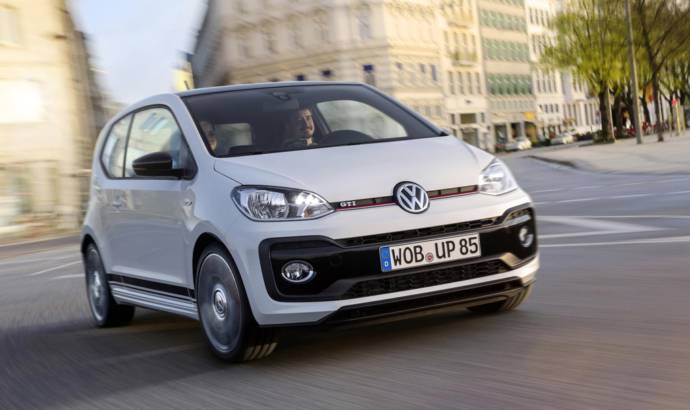 Some years ago there were rummors about a sporty Volkswagen Up!. But VW rejected them and everyone calmed down. Until now, when Volkswagen decided to really introduce a sporty version of the Up!, based on the recently facelifted version of the car.

Volkswagen goes even further, saying that a circle closes 41 years after the debut of the first Golf GTI, because the Germans are presenting a compact, sporty car in the spirit of the original GTI.

When the first GTI was launched in the 1970s it democratised access to fast roads around the world – especially the overtaking lane of German motorways.

The new up! GTI is driven by a turbocharged engine (TSI) with powerful 230 Nm torque. The key data do indeed read like a Golf GTI MkI catapulted into the present day.

The most powerful up! to date has at the front the red stripe across the radiator grille with honeycomb pattern. Integrated above it is the GTI logo. Here the up! cites the archetypal GTI with features such as the double stripes across the wide side sill panels.

The exterior mirror caps are in high-gloss black; the 17-inch alloy wheels have also been completely redesigned. They have a particularly dashing look in the wheel housings because the up! GTI features sports running gear, lowering the body by 15 mm.

GTI features a red strip as well as a larger roof edge spoiler for greater downforce on the rear axle for optimised handling performance at higher speeds.

The interior includes features as a leather-trimmed sport steering wheel, a GTI gear knob and the legendary "clark" seat pattern. 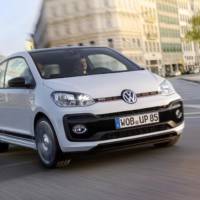 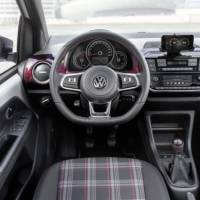 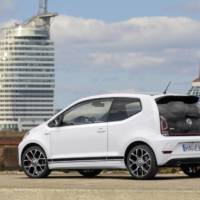 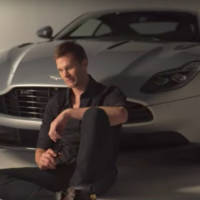 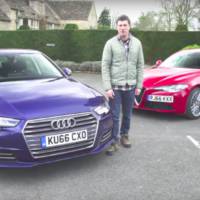