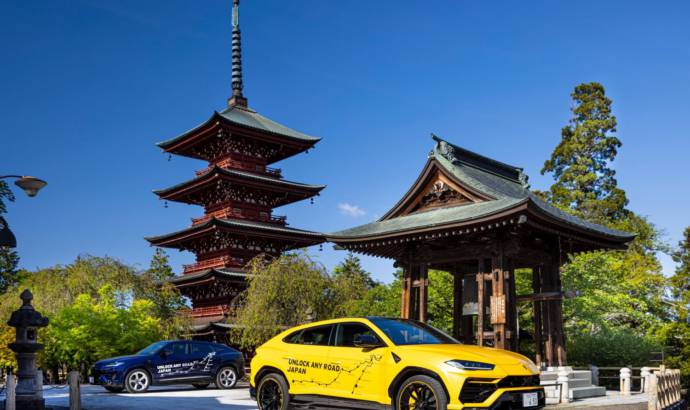 Automobili Lamborghini Japan launched the cross-Japan project UNLOCK ANY ROAD JAPAN: a route of more than 6,500 km aboard the Super SUV Urus, which started on 26 April from Fukoka, taking in 17 different stages before ending on 23 May in Tokyo. The relay-style drive was undertaken by automotive, lifestyle and fashion media, departing from and arriving at authorized Lamborghini dealers over a month.

The expedition’s two Urus were especially customized by Lamborghini’s Centro Stile design department: one in a Giallo Inti Pearl Capsule specification and one in Blu Astraeus.

They started their journey in Fukuoka and passed through the incredible scenarios of Hiroshima, Kobe, Osaka, Nagoya, Kanazawa, Yamagata, and Akita during the first half of the route. Travelling north along the Sea of Japan, the two Urus passed through Hokkaido, Sendai, and Yokohama before reaching the final destination: THE LOUNGE TOKYO in Roppongi, Tokyo.

The project communicated the beauty, dynamism and other charms of Japan while demonstrating the absolute versatility of the Urus: the first Super Sport Utility Vehicle in the world to merge the soul of a super sports car with the functionality of an SUV. As the quintessential representation of freedom, the Urus enables drivers to unlock any road to explore any terrain, from track to sand, ice, gravel or rocks.

At the starting point of Fukuoka, the tour visited Miyajidake Shrine, which is famous for its view of the Road of Light, and then moved to Hiroshima, with a stop at the Atomic Bomb Dome. In Kagawa, the two Urus had a refreshing drive through Flower Park Urashima with its flower fields and ocean view, and then the 12,300 m Great Seto Bridge. The drive continued to Bizen City, which offered elegant views of Japan, and Himeji Castle, which was Japan’s first World Heritage Site, capturing on film the combination of Japanese culture and the Urus, with its dynamic performance and unmistakable Lamborghini design.

SEE ALSO:  This is the 2021 Lamborghini Huracan Evo Spyder RWD

With a view of the secluded Juni Falls deep in the mountains, the convoy experienced the off-road trail of Nara Trial Mountain, through muddy terrain with a weakened grip from rain. While driving, the SUVs encountered the Yoshino River Koinobori that marked Children’s Day with approx. 200 carp streamers swimming in the blue sky, and then arrived at the Shigiikoma Skyline, which commanded panorama night views.

After a peaceful drive through the beautiful Nishinooka Bamboo Forest Road, the tour stopped at Yasaka Shrine, which is said to have been established over 1,300 years ago. It then continued by Pacific Long Beach with its majestic stretch of beautiful blue ocean, then Lake Biwa, which is Japan’s largest lake, finally arriving in Shirakawa-go Village, which is surrounded by Japan’s unspoilt landscape.

SEE ALSO:  Lamborghini celebrates 30 years since the launch of Diablo

The convoy arrived in the Higashi Chaya District, which is lined with traditional townhouses with distinct red lattice-work windows. Once on Chirihama Nagisa Driveway, cars could drive on a sandy beach. In Yamagata Prefecture, the Lamborghini SUVs were photographed with Hakusan Island, which sits off Yura Beach. The two-tone color of the Urus Pearl Capsule added vibrant color to the beautiful landscape. 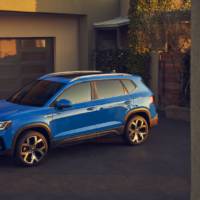 PREVIOUS 31 May 2021
Volkswagen Taos launched on the US market