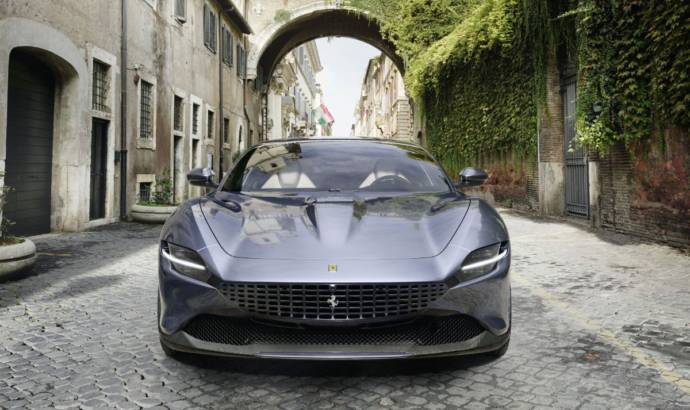 Ferrari is about to reveal a new supercar, called the Roma. It already showed us some details during an online campaign. Exemplifying the concept of the Nuova Dolce Vita, the car has been the protagonist of a dedicated shoot in iconic locations around Italy’s capital city where it has encountered public and critical claim alike.

The latest coupé from Maranello features harmonious proportions and elegantly balanced volumes which are very much in line with Ferrari’s front-engined grand touring tradition. Timeless and sublimely refined, from a technical point of view the Ferrari Roma introduces a series of unparalleled features that put it at the top of its segment in terms of performance and driving enjoyment.

These include most notably a new powertrain with 8-speed gearbox, the introduction of the five-position manettino for the first time on a Ferrari grand tourer, and a best-in-class power/weight ratio. All of which make the Ferrari Roma the most powerful and fun to drive mid-front-engined V8 2+ in Ferrari history.

The Ferrari Roma’s 620 cv engine belongs to the V8 turbo family voted International Engine of the Year for four years in a row. The main innovations on this version of the Ferrari V8 are new cam profiles, a speed sensor which measures the turbine revolutions and allows the maximum revs per minute to be increased by 5,000 rpm, and the introduction of the Gasoline Particulate Filter to comply with the strictest Euro 6D anti-pollution standards. Ferrari engineers worked hard to optimize the GPF, a closed matrix filter which traps particulate matter produced during thermal engine combustion, thus guaranteeing that it would not compromise driving pleasure.

The car’s new 8-speed dual-clutch gearbox is more compact and 6 kg lighter than its 7-speed predecessor. As well as reducing fuel consumption and emissions, shifts are faster and smoother thanks to the use of low-viscosity oil and a dry sump configuration to minimise fluid-dynamic efficiency losses, which makes the car even more responsive on the open road, but also especially comfortable in town and during stop & start driving situations.

The gearbox is based on a dual-clutch oil bath architecture and is derived from the new 8-speed gearbox introduced on the SF90 Stradale. The main modifications made with respect to the latter are longer gear ratios and the introduction of a reverse gear (which is not used in the SF90 Stradale gearbox as the electric motor is used for this). The new clutch module is 20% smaller but delivers 35% more torque than that of the previous 7-speed. The transmission software strategy has been evolved thanks to a more powerful ECU and better integration with the engine management software. This has made the shifts quicker, smoother and more consistent.

The Ferrari Roma boasts Variable Boost Management, a control software developed by Ferrari that adjusts torque delivery to suit the gear selected, delivering increasingly powerful pick-up as revs rise, whilst optimising fuel consumption. As the car goes up through the gears the amount of torque delivered by the engine increases all the way up to 760 Nm in 7th and 8th gear. This has allowed Ferrari to use longer gear ratios in the higher gears, which helps keep fuel consumption and emissions down, while adopting a steeper torque curve through the rev range in the lower gears for a feeling of smooth, consistent pick-up.

The Ferrari Roma’s dynamic development was focused on delivering superior driving pleasure and comfort thanks to the low vehicle weight and to the introduction of the latest evolution of the Side Slip Control. The Ferrari Roma’s chassis benefits from the technology developed by Ferrari for its new generation models; bodyshell and chassis have been redesigned to incorporate the latest weight reduction and advanced production technologies. In fact, 70% of its components are entirely new. The mid-front-engined 2+ Ferrari Roma has the best weight/power ratio in its segment (2.37 kg/cv), which enhances handling dynamics and responsiveness.

The Ferrari Roma embraces the Side Slip Control 6.0 concept, which incorporates an algorithm that delivers a precise estimate of sideslip to the on-board control systems. The SSC 6.0 integrates systems such as the E-Diff, F1-Trac, SCM-E Frs and Ferrari Dynamic Enhancer, the latter debuting in the Race position on the Ferrari Roma. The aim of the 5-position manettino – Wet, Comfort, Sport, Race, ESC-Off – is to make the Ferrari Roma’s handling and grip more accessible which, together with the car’s basic mechanical set-up, makes the Roma extremely entertaining to drive.

Ferrari Dynamic Enhancer is a lateral dynamic control system which gently adjusts brake pressure on one or more wheels depending on the situation. On the Ferrari Roma it is available solely in the Race setting of the manettino. FDE is not a stability control system; indeed, it flanks the traditional ESC to make the sideslip dynamics smoother, more predictable and controllable. This supports the whole target of the Race position itself, which is driving pleasure and fun behind the wheel.

The integration of highly technical features, aimed at obtaining sports car-type downforce, with the car’s design concept was made possible by the fact that the Ferrari Aerodynamics department and Styling Centre work hand-in-glove on a daily basis. The Ferrari Roma generates 95 kg more downforce at 250 km/h than the Ferrari’s other 2+ model, the Portofino, thanks to vortex generators on the front underbody and active aerodynamics at the rear. The former were given the task of very efficiently generating downforce on the front axle with a negligible increase in drag, while the electrically activated mobile spoiler produces downforce at the rear to optimally balance the car.

Over 300 km/h, the spoiler is always in MD mode because in such conditions it is preferable to have a more balanced car, in part because of the minimal impact on drag. In speed ranges in which downforce plays a pivotal role in performance, the spoiler is in MD position and its movement depends on the car’s longitudinal and lateral acceleration. The position of the mobile spoiler is not selected manually. Its activation threshold value is variable and linked to the manettino position. This choice was made because of the desire to harmonise the integration of downforce generation with the vehicle dynamics controls.

The look and feel of the cabin was driven by the complete redesign of the HMI, which marks a major leap forward starting from the new Ferrari range steering wheel designed using the “Eyes on the road, hands on the wheel” philosophy. The digital instrument cluster is protected by an elegant binnacle, which extends out naturally from the dash. The instrumentation is now entirely digital with all the screens going completely black when the car is not running, lending the cabin a very minimalist look. But once the Engine Start button on the steering wheel is pushed, a “ceremony” of sorts begins that sees all the digital components gradually springing to life until the whole cockpit is aglow.

The instrument cluster comprises a single 16” HD screen that is curved to make it easier to read. In the default screen, the navigation and audio screens surround the large circular rev counter. The screen’s dimensions mean that there is huge flexibility in terms of personalising the displays, which are very easy to navigate using the steering wheel controls. For example, it is possible to select a full screen version of the navigation map for ease of use.

The new steering wheel introduces a series of multi-touch controls that allow the driver to control any aspect of the car without ever taking their hands off the wheel. Traditional controls include the 5-position manettino, headlights, windscreen wipers and indicators. The new haptic controls include a very practical touchpad on the right-hand spoke of the steering wheel which allows the driver to navigate the central cluster screens, while voice and Adaptive Cruise Control are on the left.

Ferrari’s unparalleled quality standards and increasing focus on client service underpin the extended seven-year maintenance programme offered with the Ferrari Roma. Available across the entire Ferrari range, the programme covers all regular maintenance for the first seven years of the car’s life. This scheduled maintenance is an exclusive service that allows clients the certainty that their car is being kept at peak performance and safety over the years. This very special service is also available to owners buying pre-owned Ferraris. 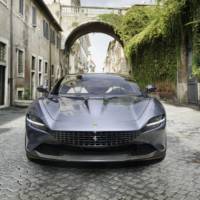 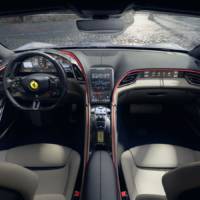 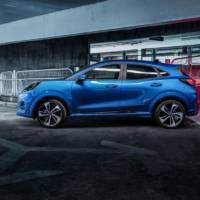 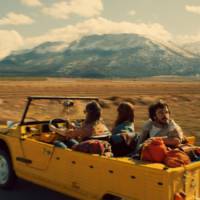