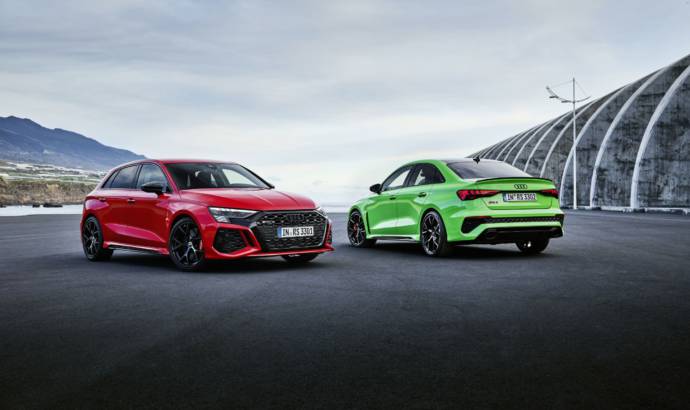 Audi is stepping into a new era of performance with the new generation RS3, already teased in Europe. With its five-cylinder, high-performance engine, the Audi RS3 is one-of-a-kind in the segment.

The 2.5 TFSI has earned the title of “International Engine of the Year” nine times in a row (2010-2019). In the latest generation of the compact sports car, the engine is now more powerful than ever before, developing 400PS and 500Nm of torque – allowing a 0-62mph sprint of just 3.8 seconds. The top speed for the standard RS3 is limited to 155mph, but the Launch Edition and Vorsprung models see that increase to 174mph. With the RS Dynamic package and ceramic brakes, customers can even reach a top speed of 180mph. This makes the Audi RS3 the best in its class in terms of acceleration and top speed.

This is primarily due to the 20Nm increase in torque over the previous RS3, which is available between 2,250 and 5,600rpm. As a result, the Audi RS3 accelerates even faster from low rev ranges. The engine’s maximum power of 400PS is available earlier than before at 5,600rpm and extends over a broad plateau to 7,000rpm. A new engine control unit also increases the speed at which all of the drive components communicate with each other.

A seven-speed dual-clutch transmission puts the power of the five-cylinder engine to the road – with short shifting times and a sportier gear ratio spread. The engine’s unique 1‑2‑4‑5-3 ignition sequence and the incomparable sound that comes with it make the driving experience that much more exhilarating. For the first time, the exhaust system features a fully variable flap control system that supports intermediate positions, thus broadening the sound characteristics even further.

The new Audi RS3 is the first Audi model that comes standard-equipped with a torque splitter. It replaces the rear axle differential and the previous multiple disc clutch package on the rear axle. Instead, an electronically controlled multiple disc clutch is used on each of the drive shafts. This ensures that the right amount of torque is optimally distributed along the rear axle. During more dynamic driving, the torque splitter increases the drive torque to the respective outer rear wheel with the higher wheel load, which significantly reduces the tendency to understeer. In left-hand curves, it transmits the drive torque to the right rear wheel, in right-hand curves to the left rear wheel, and when driving straight ahead, to both wheels.

The new technology also makes controlled drifts on closed-off tracks possible – in this case, the torque splitter directs all of the power to only one of the rear wheels, with up to 1,750 newton meters per wheel possible. Audi even developed a driving mode specifically for the RS 3 for this purpose – “RS Torque Rear” – as a drift mode with its own characteristic curve for the torque splitter. The RS Performance mode, created specifically for the racetrack, is another never-before-seen innovation, which uses a specific engine and transmission configuration. In this case, the torque splitter delivers a particularly dynamic, sporty ride along the longitudinal axis with as little understeer and oversteer as possible. These modes can be selected via the Audi drive select driving dynamics system, which also offers the following profiles: comfort, auto, dynamic, RS Individual, and efficiency.

The Audi RS3 Sportback and RS3 Saloon will be available to order in the UK starting in mid‑August 2021, with first customer deliveries due towards the end of the year. The base price for the RS3 Sportback is set at £50,900, while the RS3 Saloon is listed at £51,900. 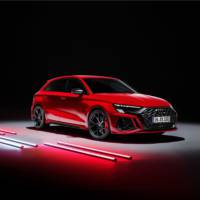 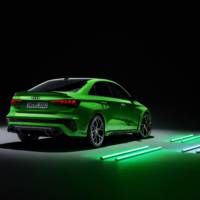 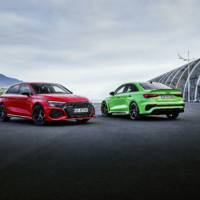 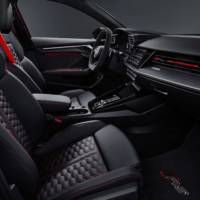 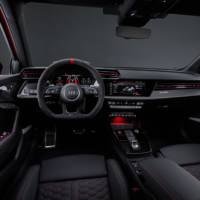 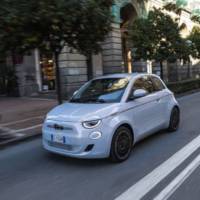 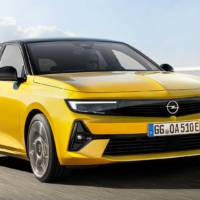