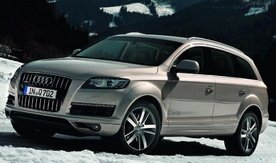 The German automaker is introducing the newest entry-level engine for the Audi Q7, which is the 3.0 TDI.
With this new engine that produces 204 HP (150 kW) and 450Nm of torque the Audi Q7 3.0 TDI is able to cover 100 Km on just 7.2-litres of fuel (32.67 US mpg) while carbon dioxide emissions are of 189 g/Km.
Also responsible for the increased efficiency are the car’s new 8-speed automatic transmission and stop start technology, plus the Audi Q7 3.0 TDI also comes with a four-wheel drive system as standard.
Accelerating from 0 to 100 Km/h (0 to 62 mph) in the Audi Q7 3.0 TDI takes 9.1 seconds, and a top speed of 205 Km/h (127 mph) can be reached.
The Audi Q7 3.0 TDI price for Germany is 51,800 euros.
Audi press release :
Highly efficient – the new Audi Q7 3.0 TDI quattro with 150 kW
* fuel efficiency of just 7.2 liters of diesel per 100 km
* eight-speed tiptronic and quattro drive
Audi has added a new and especially efficient member to its Q7 family. The Q7 3.0 TDI offers 150 kW (204 hp) while consuming an average of just 7.2 liters of diesel per 100 km (32.67 miles per U.S. gallon) – better than all direct competitors. At the same time, a 3.0 liter V6 drives this large SUV powerfully and smoothly. An eight-speed tiptronic and quattro permanent all-wheel drive round out the luxurious drivetrain.
The new V6 TDI in the Q7 is a high-tech engine. It weighs far less than 200 kilograms (440.92 lb) and extensive measures minimize internal friction. Innovative thermal management – a new feature of many Audi engines – is particularly complex in the 3.0 TDI. The crankcase and the cylinder heads have separate cooling water circuits; coolant is not circulated within the block while the engine is warming up.
A common-rail system with lightning-fast piezo injectors provides injection pressure up to 2,000 bar; the turbocharger and the camshafts’ control times have been optimized for maximum efficiency. A start-stop system deactivates the engine as soon as the vehicle comes to a stop, and an energy recovery system – standard for the entire model line – stores energy during deceleration.
The EU 5 classification for this new entry model in the Q7 family will come as no surprise, just like its high fuel efficiency. On average, it needs 7.2 liters per 100 km (32.67 miles per U.S. gallon). And its CO2 equivalent is just 189 grams per km (304.17 grams per mile) – no other large SUV from a European brand boasts such a low value. The efficient TDI delivers 150 kW (204 hp). Its maximum torque becomes available just above the idling point: 450 Nm (331.90 lb-ft) remain constant between 1,250 and 2,750 rpm.
This large SUV accelerates from 0 to 100 km/h (62.14 mph) in 9.1 seconds. In the version with an optional air suspension, it reaches a top speed of 205 km/h (127.38 mph); with steel suspension, 202 km/h (125.52 mph).
The Q7 3.0 TDI with 150 kW (204 hp) offers the same power transmission as all other models in this line. The new and efficient eight-speed tiptronic – with its high overall gear ratio – delivers torque to the quattro permanent all-wheel drive, which has a sporty rear-end bias. Double wishbones made of aluminum guide all four wheels; the chassis delivers great agility and stability. An off-road mode and a hill-descent assistant aid off-road driving.
With a wheelbase measuring 3.00 meters (9.84 feet) and an overall length of 5.09 meters (16.70 feet), the interior offers plenty of room. Audi offers the Q7 with five, six or seven seats. The luggage compartment offers as much as 2,035 liters of capacity (71.87 cubic ft). This new entry model’s standard equipment package includes two-zone deluxe automatic air conditioning, a high-beam assistant, and an MMI radio multimedia interface.
Options include climate-controlled comfort seats, a panoramic glass sunroof, an electric tailgate, and a load-securing kit with rails for cargo. Sophisticated driver-assistance systems and a system of ultramodern infotainment modules round out the offer.
Despite a generous equipment package, this model line’s new entry model costs just 51,800 euros in Germany. This basic price makes the Q7 more affordable than all of its direct competitors 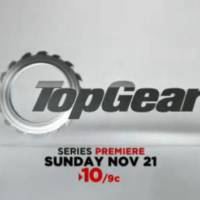 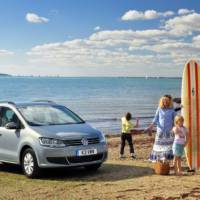