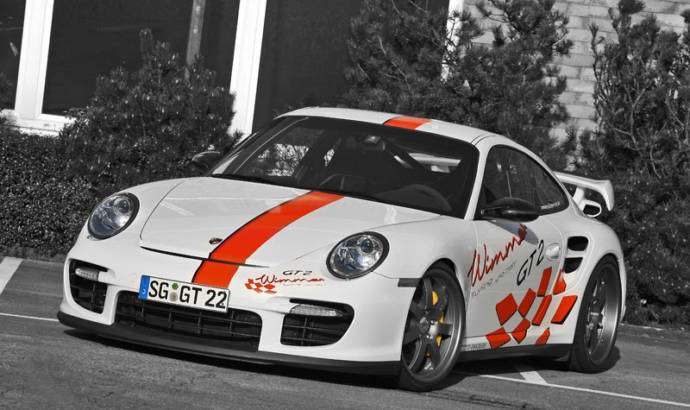 German car tuning company Wimmer RS has prepared a power package for the Porsche 911 GT2, named the ‘GT2 Speed’.
In order to develop more horsepower the Wimmer Porsche 911 GT2 Speed received extensive engine modifications that include engine retrofitting, modifications to the engine block, pistons, injection nozzles, sports camshafts, throttle valve and a totaly new engine software. Of course the main reason the Wimmer Porsche 911 GT2 Speed was able to gain the extra power boost are the two high performance turbochargers, plus the car was fitted with an intercooler as well.
All these technical improvements mean the Wimmer Porsche 911 GT2 Speed can unleash no less than 827 horsepower at 7,400 rpm and 948 Nm of torque, figures that enable the German sports car to accelerate from 0 to 100 Km/h in 3.38 seconds, from 0 to 300 Km/h in 20.2 seconds and reach a top speed of 378 Km/h depending on the tyres that are used.
The Wimmer Porsche 911 GT2 Speed also received a Sport Exhaust System while at the exterior a set of carbon rear-view mirrors and a carbon rear spoiler lip were fitted.
The Wimmer Porsche 911 GT2 Speed price is about 281,000 Euros, witch includes the new car and the engine retrofitting.
Wimmer RS press release :
Not long ago a team of experts of Thorsten Wimmer created a very successful tuning package for Porsche GT2, and there comes its hyper-successful update. The Wimmer RS car tuner from Solingen calls his latest power package “GT2 Speed”, and this is a real tribute to its name – “Speed”. Certainly, its performance data speaks for itself: 827 hp at 7,400 rpm and 948 Nm of torque. You shouldn’t forget about the power-to-weight-ratio of 1.84 Kg/hp and v-max of 378 km/h depending on translation. Jesus, what else do you want!?
There’s no doubt: one who has ever had an opportunity to drive Porsche GT2 will hardly complain about the lack of engine performance while driving this car or after that. After all, Porsche GT2 will be produced serially with the high powered engine, that without any efforts makes the car disappear in
seconds turning into blue mist. Even the thought of the total power of 827 hp will make the mouths of hp-freaks water.
The Wimmer GT2 Speed Bi-Turbo Power Package includes very sophisticated engine retrofitting. Besides the modifications of the engine block, pistons, piston rods, injection nozzles, sports camshafts, inlet system, throttle valve and the installation of an intercooler, Wimmer uses absolutely new
engine software. Nevertheless, the centerpiece of the engine retrofit is the two high performance Wimmer turbochargers blowing a heavy load of air into the combustion chambers. The specially produced Wimmer Sport Exhaust System in complex with the welded exhaust manifold and two exhaust systems provide for furious roaring and whooshing – GT2 Speed replies to every push of the gas pedal by an incredible boost!
The Wimmer RS indicates the acceleration of GT2 Speed Bi-Turbo as 3.38 seconds from 0 to 100 km/h. Within 8.54 seconds Wimmer RS hyper-Porsche more than doubles this speed. Thanks to giant engine power, the speed of 300 km/h is reached within 20.2 seconds. Concerning the top speed – the “watches” show 378 km/h – depending on the chosen translation and tyres’ performance!
DTM reliable car mechanics determine the nature of the Dunlop tyres thus opening a new tyre product segment: The MaxxPerformance tyres. “Sport Maxx GT” tyres in dimensions of 235/30-20 or 325/25-20 mounted on beautiful Sportec rims provide for an outstanding stability at high speed, at above
300 km/h.
The appearence of the Porsche GT2 has been optimized by Wimmer RS with Carbon exterior rear-view mirrors and a Carbon rear spoiler lip.
In order to correspond with the increased driving performance, the serial chassis has been furthermore improved by H&R sport springs.
After great engineering works, the vehicle is not only ready for serial production but also complies with Euro-4 Standard. The one who lets the beast out of the pit lane has a clear performance lead. The price for the new car, including retrofitting, is about 281,000.00 Euros!
ESSEN MOTOR SHOW 2009: Wimmer RS is to be found in hall 5 booth 312 and will present the Porsche GT2, Ferrari F430 Scuderia and the VW Golf VI GTI. 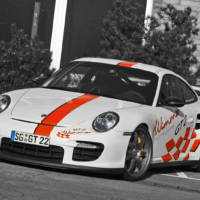 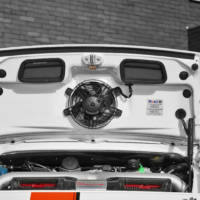 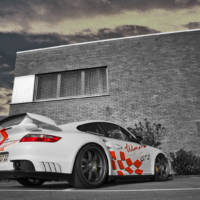 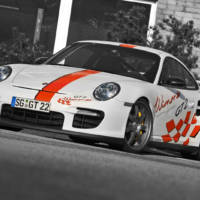 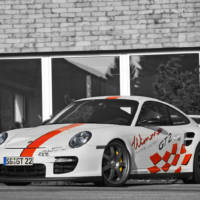 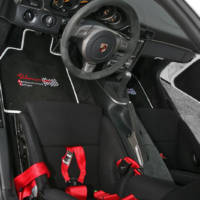 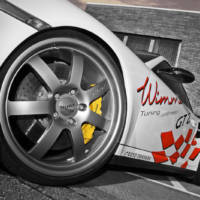 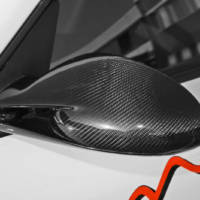 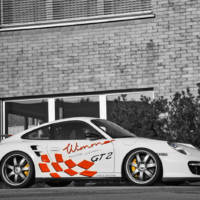 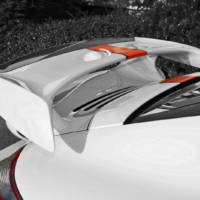 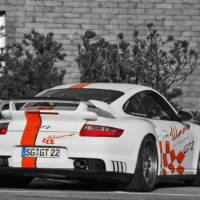 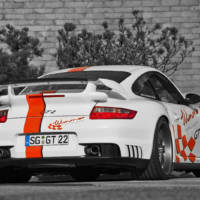 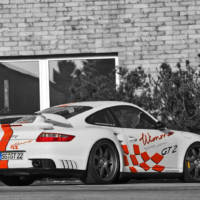 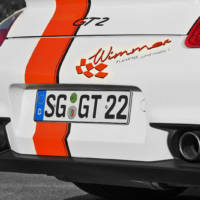 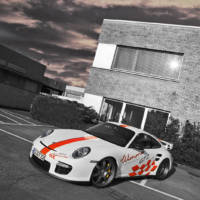 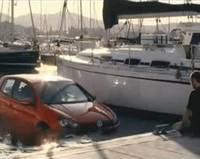 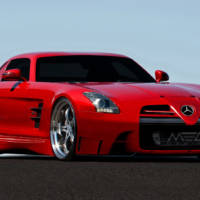