Vauxhall is working hard to deliver its clients a zero-emission experience even when they are transporting goods in crowded cities.

Vauxhall has released the first details and images of the All-New Movano and Movano-e, the first large Light Commercial Vehicle (LCV) from the brand to be available as a fully-electric variant. Featuring class-leading load volume, a wide variety of body styles, seating for up to seven and low running costs, both electric and diesel versions will arrive in the UK later this year.

All-New Movano joins the Combo and the Vivaro as the newest members of Vauxhall’s award-winning LCV family. The all-new Movano-e lines-up alongside Vivaro-e and, from later this year, Combo-e, meaning Vauxhall offers a fully electric version across its entire LCV range and remains on course to deliver an electrified version of all its cars and vans by 2024.

Featuring a 90kW (122PS) and 260Nm electric motor, the Movano-e is available with a choice of either a 37kWh or 70kWh battery, with ranges of 72 miles and 139 miles respectively under WLTP testing, making it perfect for urban environments, such as last-mile deliveries, and the open road. Like Vauxhall’s other fully electric LCV models, the Movano-e is exempt from current ultra-low and congestion charge payments. The zero emissions powertrain also allows businesses to save significantly on company van tax, with a 0% Benefit-in-Kind tax rate. This provides eligible businesses with immediate and significant annual savings that can amount to thousands of pounds.

The all-new Movano-e’s lithium-ion battery is mounted under the floor between the front and rear axle, resulting in no compromise in load volume compared to the diesel-engined model. This positioning of the battery also results in a low centre of gravity, improving cornering and stability even when fully loaded. A sophisticated regenerative braking system that recovers energy when slowing further increases the Movano-e’s efficiency.

The all-new Movano is also available with a diesel engine option. The state-of-the-art 2.2-litre unit meets strict Euro 6d emissions regulations and is available with a range of power outputs, from 120PS to 165PS and with torque figures of between 300Nm and 370Nm. All versions of the engines feature a six-speed manual gearbox and front-wheel drive.

Panel van customers can choose from four wheelbase lengths (L1, L2, L3 and L4) and three height options (H1, H2, and H3), with load volumes from 8.0 to 17 cubic metres. Measuring 1,422mm between the wheel arches and 1,870mm between the side panels, the All-New Movano has set benchmarks for its rivals’ load bay dimensions.

On high roof H3 variants, the rear doors have an unrivalled 2.03mm loading height, plus they can be opened up to 270 degrees. The All-New Movano also benefits from one of the widest range of Gross Vehicle Weights in the large LCV class (2,800kg to 4,000kg) and a maximum payload of 2,100kg. The standard panel van has a single row of three seats, while crew cab versions benefit from second row seating that can accommodate a further four passengers.

The all-new Movano is also available as a chassis cab, a chassis crew cab and a platform cab with a single row of three seats. Developed to meet the widest range of needs, these versatile models provide a perfect base for a wide range of conversions, including tippers and dropside loaders. 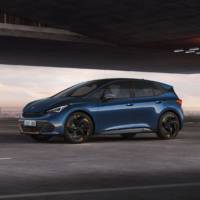 NEXT 31 May 2021
Cupra Born official photos and info