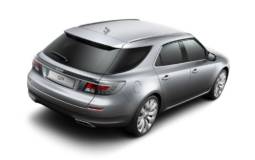 Swedish car maker Saab has revealed its plans of introducing a new player in the premium estate segment, the 2011 Saab 9-5 SportWagon which will premiere at the Geneva Motor Show in March.

Featuring a sleek, bald aspect, inspired from the AeroX the 2011 Saab 9-5 SportWagon is a versatile option to the 9-5 saloon,with some of its exterior lines including a falling roof and a raked rear screen flanked by Saab’s signature ‘wraparound’ window glazing.