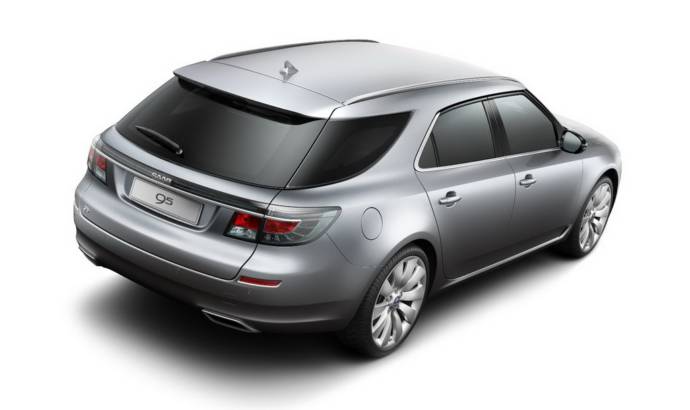 Saab press release :
* Next step in Saab’s biggest-ever new product offensive
* Distinctive alternative choice in premium estate segment
* Styling carries forward 9-5 saloon’s bold design language
* Order book opens in Spring, first customer deliveries from September
Trollhättan, Sweden: Saab Automobile takes the next step in the biggest new product offensive in its history when the much-awaited 9-5 SportWagon is unveiled at the Geneva Motor Show.
Sleek and fun-to-drive, the SportWagon adds versatility to the widely acclaimed attributes of the 9-5 saloon and will bring a distinctive, alternative choice to the premium large estate segment.
It shares the saloon’s bold, AeroX-inspired looks and features an extended, falling roof-line which culminates in a steeply raked rear screen flanked by signature Saab ‘wraparound’ window glazing. The result is an imposing body with a low stance and a dynamic, visual appeal that concedes nothing to the requirements of load-carrying.
Smart cargo handling features include an adaptable multi-fold floor, flexible U-rail load space configuration and under-floor stowage with a sealed wet storage compartment.  A programmable, powered tailgate is also available.
Backed by the same all-turbo petrol and diesel powertrain line-up as the 9-5 saloon, the SportWagon includes Saab’s industry-leading XWD all-wheel-drive system and advanced features such as: Saab DriveSense adaptive chassis control, adaptive cruise control (late 2012), Bi-Xenon SmartBeam adaptive lighting, keyless entry and starting, tri-zone air conditioning and a Head-up Display which projects information, aircraft-style in the windshield.
The order book for the SportWagon opens in Spring, with first customer deliveries to follow from September. It will significantly broaden the appeal of the new 9-5 range in a segment where Saab, with its tradition for designing versatile vehicles, has enjoyed estate sales volumes on a par with saloon levels.
“The launch of the 9-5 SportWagon is a much-awaited next step in the roll-out of our new product offensive,” says Saab Automobile CEO Jan Åke Jonsson. “It will take Saab back into the large estate segment where we have established a strong presence in many key markets with our previous offering.”
Sporty character
Designed in parallel with the saloon, the 9-5 SportWagon shares the same bold frontal styling and adds a swept, ‘wraparound’ rear window graphic. This echoes the 9-5’s signature frontal theme and gives the SportWagon its own distinctive identity. The dramatic, sweeping roof-line is extended by a deep rear spoiler integrated into the top of the tailgate. Ultra-slim roof rails that blend into the car’s svelte silhoutte are fitted as standard.
Signature Saab themes, such as the strong C-pillar with its hockey stick extension of the belt-line, are combined with a prominent rear shoulder contour to give the SportWagon a muscular and dynamic stance.
The tailgate is raked forward to underline the car’s dynamic character. Itfeatures a full-width ‘ice-block’ rear light bar which wraps into light units at either side, continuing a new signature Saab styling theme first seen on the 9-5 saloon and 9-4X crossover.
Dynamic and functional
The deep cargo deck is fully carpeted and optimized for space and ease-of-use.  The 60/40 split rear seatbacks fold down almost completely flat without having to reposition the seat squab or remove the head restraints. Careful attention to soundproofing in the rear bodywork attenuates noise, vibration and resonance so that occupants enjoy a level of interior refinement similar to that of the saloon.
With the seatbacks lowered, the cargo deck is almost two metres long (1,962 mm) and offers an adaptable load capacity of up to 1,600 liters (527 litres, rear seats up). The side walls are completely flat and upright, creating a clean, open space without any hard-to-use corners or rear wheel-arch intrusions. Compartments in the side walls offer convenient stowage for small items. Four tie-down loops and a 12-volt power outlet also come as standard.
An optional, U-shaped track around the outside of the floor provides flexible space configuration. As in the 9-5 saloon, it carries an adaptable, telescopic dividing rail which allows the cargo deck to be split as required so that different sized items can be separated and kept in place.
The floor, with a signature Saab aircraft-shaped handle, folds back in steps to access under-floor storage, with a sub-floor 65 mm below the main floor height – ideal for the separate stowage of flat or small items.
A pull-out support arm can be slotted in place to keep the folded floor in a fixed position. This provides further support for items stored in the under-floor recess, as a flexible alternative to using the entire cargo deck.
The underside of the floor has two fittings for flat stowage of the U-rail divider. They also carry hooks that can be used to organize bags, for example. A waterproof plastic liner, available as an option, can be dropped into the recess to provide a separate wet storage area for sports equipment, outdoor clothing or muddy boots.
Smart tailgate
For additional convenience, the tailgate is available with a remotely-controlled, electric power operation. It can be fully opened and closed via a rotary knob in the driver’s door or a button on the car’s key fob. A touch pad on the outside of the tailgate, above the number plate, also triggers powered opening and closing.
A programmable mode can be used to raise the tailgate to a lower position if there is restricted clearance overhead, such as inside a garage. The opening height is pre-set via the rotary knob, which can also disable the powered function.
For ease of loading, the tailgate opens down to bumper level with a lift-over height of only 648 mm. The cargo deck floor is also flush with the tailgate opening to facilitate sliding heavy loads inside. A down-lighter in the tailgate and small sidewall lights provide excellent illumination of the load space at night.
A retracting cargo cover can also be slotted into lugs in the sidewalls immediately behind the rear seats. It keeps items out of sight and includes a convenient one-touch action which allows the ends of the locating bar to slide up channels on the inside of the D-pillars for convenient access to the cargo deck. 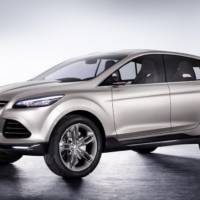 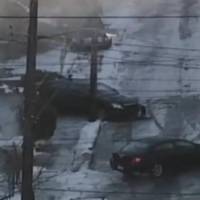