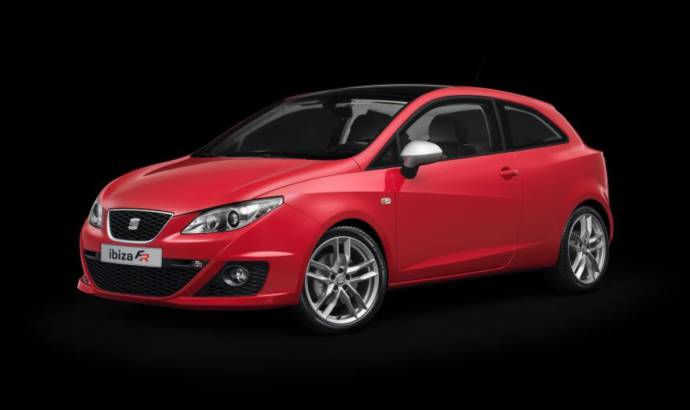 The Seat Ibiza FR is today’s third world debuting model from the Spanish automaker at Barcelona’s Motor Show. With a 1.4-liter TSI engine under the bonnet the new Seat Ibiza FR has 150 hp at it’s disposal, power that will get those wheels spinning through a 7-speed DSG gearbox equipped with paddle shifters.
Just like the previously presented Leon Cupra and Ibiza Bocanegra model the Seat Ibiza FR is also fitted with the company’s XDS system giving the vehicle maximum traction while improving handling and safety.
As far as performance the Seat Ibiza FR needs 7.7 seconds to reach 100 Km/h from a standstill and is capable or reaching a top speed of 212 Km/h while keeping fuel consumption as low as an average 6.3 liters per 100 Kilometres that complies with the Euro 5 emission standards.
Info on the Seat Ibiza FR price was not made public yet.
Seat press release :
– 150 hp twin charged 1.4 TSI engine
– Seven-speed DSG gearbox with steering wheel shift paddles
– Maximum traction thanks to XDS system
The Barcelona International Motor Show is the chosen backdrop by SEAT for the world debut of the new FR version of its most popular Ibiza.
This important addition instantly expands the most sporty element of the Ibiza range, as SEAT launches a spectacular car that combines innovative design with the character and exclusivity of a 150 hp twin charged 1.4 TSI engine and DSG gearbox with steering wheel shift paddles. The new FR promises a truly intense driving experience, and will soon be available in the SC and five-door body styles in the different markets.
FR genetic make-up
True to its name, the SEAT Ibiza FR features an exceptionally sporty exterior, matched by an equally engaging interior.
The athletic look of the whole is first noticeable on the front and rear bumpers. Both are bigger and project an aggressive silhouette, highlighting the front honeycomb grilles. A chrome frame surrounds the one in the centre, and this combines with the characteristic Arrow Design on the Ibiza that features lower headlights – with their white background casing, and a lower radiator grille.
Other specific tell-tale FR elements include the silver coloured door mirrors, 215/40 tyres on specific 17-inch rims, and the twin lateral exhaust pipes..
The interior also conveys the car’s racing nature with high gloass black dashboard inserts on certain elements such as the radio casing, instrument panel binnacle hood and the base of the automatic DSG gearknob. Other features supporting that sporty look are a specific instrument display carrying the FR logo, newly-designed steering wheel featuring built-in DSG shift paddles and the seat design, whose contours and stitched upholstery differ from the rest of the range.
Twin charged 1.4 TSI engine
The new SEAT Ibiza FR is equipped with one of the most modern engines on the market in the shape of the efficient 150 hp twin charged 1.4 TSI engine. Thanks to its latest generation technology, this engine provides greater flexibility, brilliant performance and lower fuel consumption figures and emissions levels, and fully complies with EU-5 legislation.
The Ibiza FR’s engine, which replaces the 150 hp 1.8 20VT of the previous version, is mated to a seven-speed DSG gearbox with steering wheel shift paddles. As on the CUPRA version, the gearbox has been developed with sportier software than on the 1.6 (which also boasts the option of DSG). Moreover, the shift paddles on the Ibiza FR definitely contribute to its sporty feel.
Likewise, the new DSG gearbox on the Ibiza FR is innovative in itself. It is the first seven-speed gearbox with a transversal assembly position, as well as the first with a double dry clutch. This combination, including an optimised pinion housing with less oil and an energy supply adapted according to need through the electro-hydraulic regulating unit, deliver better consumption figures than even a manual gearbox.
The performance figures of the new Ibiza FR register a top speed of 212 km/h and 0 to 100 km/h acceleration in 7.7 seconds. Its twin charged 1.4 TSI engine delivers a maximum torque of 220 Nm between 1,250 rpm and 4,500 rpm, and its average fuel consumption is 6.3 litres for every 100 km. These figures make the Ibiza FR one of the most efficient cars in its class.
The FR’s 1.4 TSI engine also delivers outstanding CO2 emissions of just 146 g/km thanks to its reduced cylinder capacity, keeping in line with SEAT’s commitment to lowering the emissions levels of all its engines.
Now with XDS
The addition of the XDS system to the equipment on the Ibiza FR provides much greater driving comfort and safety. This electronic system works together with ESP and functions as a self-blocking mechanism. It improves the car’s performance when traction is lost by applying braking power to the wheel that loses grip.
This system provides a similar feeling on the steering wheel as driving a car with a limited slip differential self-blocking mechanism, considerably improving the capacity of transferring power to the ground beneath the front axle. Especially around curves, this prevents the inside wheel from slipping and reduces understeer, providing the Ibiza FR with unbeatable handling.
This exciting feature works in concert with the brand’s characteristic Agile Chassis concept to provide efficient driving in any conditions.
Generous equipment
The SEAT Ibiza FR features a complete line-up of standard equipment that is hard to find on other models in its segment.
One significant aspect on the Spanish brand’s new car is its electronic equipment, including standard XDS, ABS, ESP stability control, TCS traction control + EBA emergency braking assistant, and Hill Hold Assist.
Safety elements on the Ibiza FR include standard driver and passenger airbags, head-chest airbag, front fasten seatbelt warning, trip computer, cruise control, low tyre pressure warning, CD radio with MP3 + 6 speakers + Aux-in connection, climate control, sporty FR seats and sports suspension, as well as double headlights and cornering foglights for enhanced visibility.
As with the rest of the range, the new Ibiza FR will be manufactured at the SEAT factory in Martorell near Barcelona.
Note: The figures related to performance, consumption and emissions levels are pending homologation. 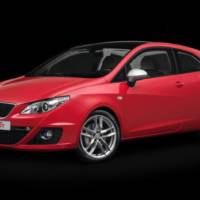 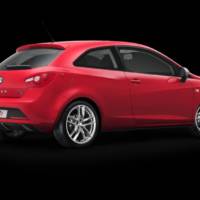 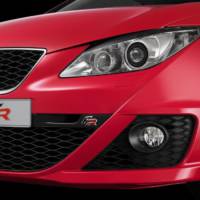 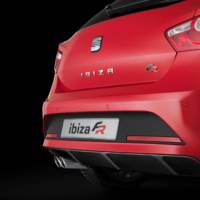 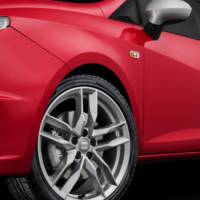 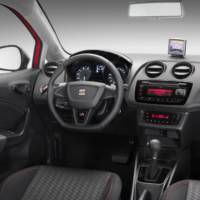 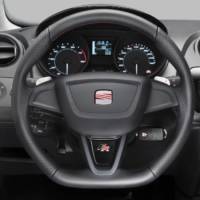 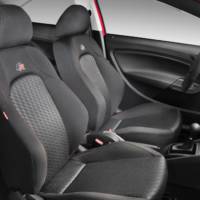 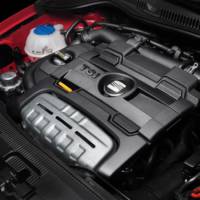 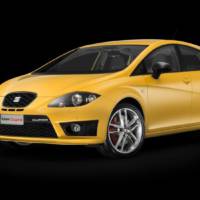 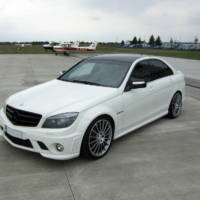