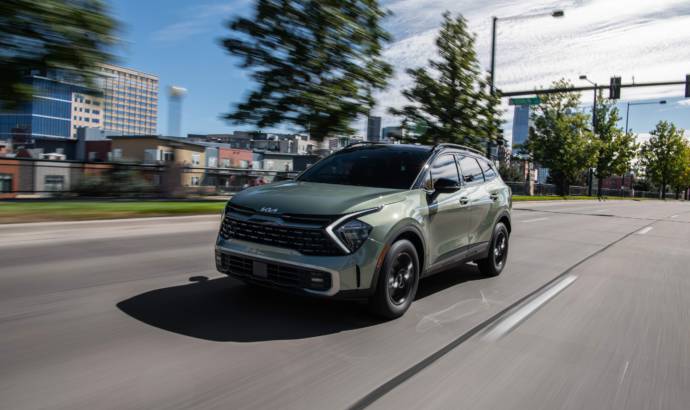 Kia is attacking the compact SUV segment with the new generation Sportage, one of the most popular models ever created by Kia.

The Sportage undergoes its most significant change to date as the fifth generation is unveiled. Developed as part of Kia’s new global brand transformation, “Movement that Inspires,” the all-new 2023 Sportage subcompact SUV delivers more of everything for today’s savvy, adventurous and eco-conscious consumers.

Exuding the brand’s new “Opposites United” design philosophy, the new Sportage is a welcome addition in a sea of bland-looking subcompact SUVs that crowd today’s market. Significantly larger, more capable and powerful, and targeted to be more fuel efficient, the fifth-generation model debuts a number of Sportage firsts including an available dual panoramic curved digital display and an exciting new variant that will literally take consumers to new heights. Most Sportage trims will now be assembled in the U.S., alongside the award-winning Telluride, Sorento, and K5 at Kia’s manufacturing plant in West Point, Georgia.

The Sportage delivers something for everyone, with a diverse lineup and trim levels that include the LX, EX, SX, SX-Prestige and X-Line, while the all-new Sportage X-Pro and X-Pro Prestige trims allow drivers to venture further into nature with off-road ready features including all-terrain tires, among other elements.

With several enticing variants to come, the 2023 Sportage will help build Kia’s reputation in electrification, while also strengthening the brand’s commitment to building rugged and capable SUVs. Following in the footsteps of the Sorento, the Sportage will also be available in a hybrid version. Details on that and other powertrains will be revealed at a later date, while gasoline variants are anticipated to go on sale in the U.S. in the first quarter of 2022.

Tiger nose grille gets more technical with floating design, perched above blacked out grille graphic that spans the entire width of the front fascia. Distinct “boomerang” daytime running lights immediately draw the eye with dramatic angles, which push the uniquely shaped headlights to the outer corners.

In developing a reputation for building rugged and capable SUVs, Sportage is available in the X-Line and all-new Sportage X-Pro trims. Both come standard with AWD and a unique tread-like stitching pattern on unique and easy to clean SynTex synthetic leather seats. 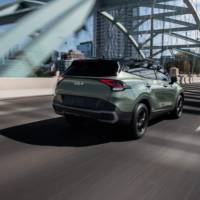 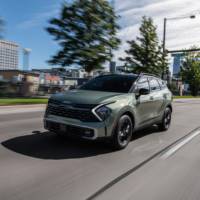 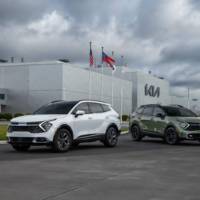 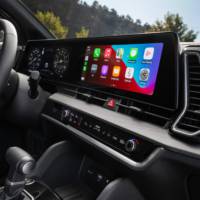 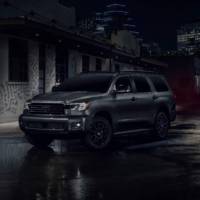 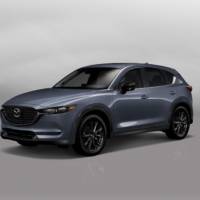