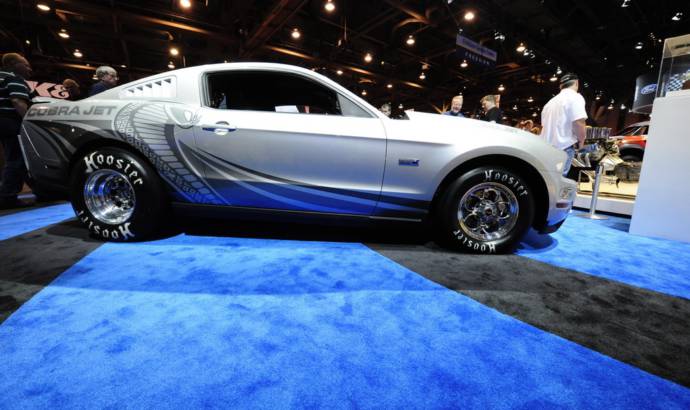 More news from the Blue Oval, who besides the 2012 Ford Mustang Boss 302S has also introduced the 2012 Cobra Jet Mustang at the Performance Racing Industry (PRI) show in Orlando, Fla..
This new version comes with all the race spec features found on the 2010 model, plus an upgraded suspension, low-drag racing brakes, black anodized Corba Jet wheels from Weld Racing, a new compound tire and three exterior colours (Race Red, Grabber Blue and Winner White).
The 2012 Cobra Jet Mustang uses an updated version of the 5.4 litre V8 and only 50 exemplars will be produced.
The 2012 Cobra Jet Mustang price starts at 91,900 USD and reaches 103,980 USD for the fully loaded Cobra Jet.
Ford press release :
Since its legendary introduction at the NHRA Winternationals in 1968, Ford’s Cobra Jet Mustang has created a legacy of power, performance and triumph that has carried through the decades.
In 2008, Ford Racing unveiled the 40th Anniversary Cobra Jet Mustang, which promptly lived up to the legend of the original version, duplicating the NHRA Winternationals victory in its inaugural race. The subsequent 2010 Cobra Jet, built on the 2010 Mustang platform, has been setting class records and is competitive at drag strips across the country.
Today, Ford Racing unveiled the 2012 Cobra Jet Mustang at the Performance Racing Industry (PRI) show in Orlando, Fla., and announced the intention to build fifty 50 turn-key 2012 CJ’s. For the first time the Cobra Jet will be available in three color options – Race Red, Grabber Blue and Winner White — and coordinated graphics.
"Ford Racing is proud to build the 2012 Cobra Jet and continue the tradition of delivering turn-key competitive race cars to Ford drag racing enthusiasts," said George Goddu, Business Manager Ford Racing Performance Group. "With every Cobra Jet build we strive to carry the spirit of the original Cobra Jet while developing the next generation of drag racing icon. The enthusiast who races the 2012 Cobra Jet can be competitive at virtually any event, from their local track up through NHRA Stock or Super Stock classes."
For decades, the Mustang has been the preeminent car in many forms of racing, including drag racing. The 2008 and 2010 Cobra Jet Mustang added to that legacy with high- profile wins at the NHRA Winternationals and U.S. Nationals, and by setting numerous Stock and Super Stock class records across the country.
The goal for the 2012 Cobra Jet is to build a turn-key race car ready to take its own place in NHRA history. Like its predecessors in 2008 and 2010 it’s a factory-built race car intended for NHRA Stock and Super Stock racing that can also be campaigned in other racing sanctioning bodies such as NMRA, NMCA, PSCA and IHRA. The 2012 CJ will come with all of the features of the 2010 car including a full race-prepared automatic transmission, drag race-specific shocks and springs, manual steering and brakes, 8.50 certified rollcage, and an Aeromotive return-style fuel system with trunk-mounted fuel cell.
For 2012, the Cobra Jet features a 5.4L supercharged engine based on the 2011 SVT Mustang with two supercharger options, a 2.3 liter TVS unit or a 4.0 liter Ford Racing Whipple supercharger. Each vehicle has an aluminum block engine, standard automatic transmission, double keyed crankshaft, Manley H-beam connecting rods, low-drag racing brakes and optimized spring rates for the front and rear. Additionally the Cobra Jet will feature black anodized Cobra Jet wheels from Weld Racing and a new compound tire with unique Cobra Jet branding from Goodyear.
Like Ford Racing’s Mustang FR500S and the 2010 Cobra Jet, this ready to race Mustang will get its start at the Auto Alliance International (AAI) assembly plant in Flat Rock, Mich. in the first quarter of 2011. The entire 50-car run of 2012 Cobra Jets will be built on the same production line that produces the 2012 Ford Mustang production car.
The MSRP for the M-FR500-CJ is $91,900 with a fully loaded Cobra Jet priced at $103,980.
For racers that want to build their own cars, there is a Mustang Competition Roller based on the Cobra Jet that is serialized and complete, minus the power train. The third option would be to start with a Mustang Body-In-White or a donor car since nearly all of the CJ components can be found in the Ford Performance Parts catalog found online at fordracingparts.com.
The limited production 2012 Cobra Jet Mustang is available on a first come order, first delivered basis through Ford dealers. 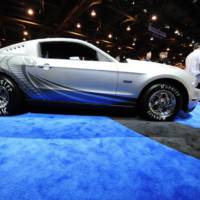 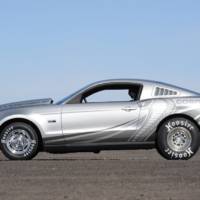 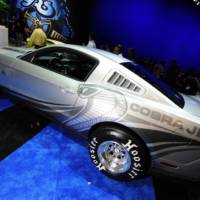 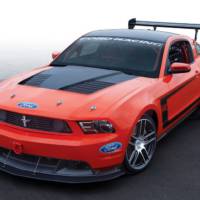 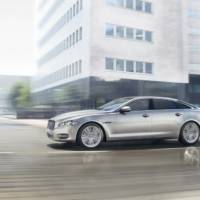