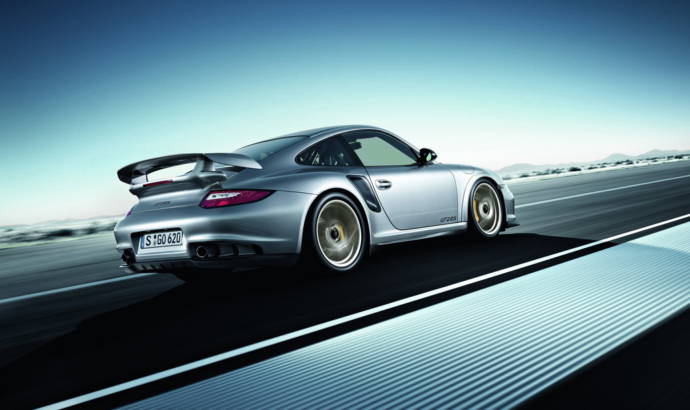 After a series of leaked images that gradually stated to surface the web, the German automaker decided to drop the official specs complete with pricing and full photo gallery for the 2011 Porsche 911 GT2 RS.
The 2011 Porsche 911 GT2 RS is the company’s most powerful street-legal car as it features a 3.6-litre 6-cylinder twin-turbo boxer engine that produces 620 HP which get sent to the rear wheels via a 6-speed manual gearbox.
The 2011 Porsche 911 GT2 RS weights only 1,370 Kg (3,021 lb) and takes 3.5 seconds to accelerate from 0 to 100 Km/h (0 to 200 Km/h in 9.8 sec., 0 to 300 Km/h 28.9 sec.) while its top speed is 330 Km/h.
Despite the power gain the automaker says the 2011 Porsche 911 GT2 RS is 5 percent more efficient as it need 11.9-litres of fuel per 100 Km, with CO2 emissions of 284 g/Km, and even though we thought the car will brake the 7 minute barrier at Nurburgring, apparently its official ‘Ring’ time was 7 minutes 18 seconds, which is nevertheless still impressive.
The 2011 Porsche 911 GT2 RS price will start at 199,500 Euro in the Euro zone, and the car is also expected to arrive on the North America shores this October.
Porsche press release :
Stuttgart. The time: seven minutes, 18 seconds
on the Nürburgring-Nordschleife. The power: 620 hp. The weight: 1,370
kilograms or 3,021 lb in road trim with all fluids on board. The car:
the new Porsche 911 GT2 RS. The GT2 RS is making its world debut at the
Moscow Auto Show on August 25th.
The future top GT model marking
the absolute climax in the 911 range is the fastest and most powerful
road-going sports car ever built in the history of Dr. Ing. h.c. F.
Porsche AG, Stuttgart. With power up by 90 hp and weight down by 70
kilograms or 154 lb in comparison with the 911 GT2, the new 911 GT2 RS
has a power-to-weight ratio of just 2.21 kilos or 4.9 lb per horsepower,
by far the best power/weight ratio in its class. Obviously, these are
the ideal ingredients for an ultra-high-performance sports car with
supreme agility, truly blistering performance on the road, and of course
exemplary Porsche Intelligent Performance. For despite this extra power
and performance, fuel consumption and CO2 emissions versus the 911 GT2
are down by approximately 5 per cent to 11.9 ltr/100 km (equal to 23.7
mpg imp) and 284 g/km.
The 3.6 litre six-cylinder boxer engine
boosted by two turbochargers with variable turbine geometry exclusive to
Porsche in its combination with a gasoline engine drives the rear
wheels via a six-speed manual gearbox. Developed especially for the 911
GT2 RS, sports tyres measuring 325/30 ZR 19 convert this massive power
into equally massive performance and acceleration on the road: 0 to 100
km/h in 3.5 seconds, 0 to 200 km/h in just 9.8 seconds, and 0 to 300
km/h in 28.9 seconds. Top speed is 330 km/h.
Equally supreme
stopping power on this ultra-high-performance sports car comes from PCCB
composite ceramic brakes. Appropriate longitudinal and crosswise
dynamics are ensured by the sporting RS set-up of the springs, PASM
Porsche Adaptive Suspension Management, anti-roll bars, as well as the
dynamic engine mounts and PSM Porsche Stability Management.
In
its looks the new 911 GT2 RS stands out clearly from the 911 GT2 above
all through the lavish use of carbon-fibre-reinforced (CFR) components
in matt-black surface finish, even wider wheels and flared wheel arches
at the front, new 911 GT2 light-alloy wheels with central locking, as
well as ”GT2 RS“ model designations on the doors and rear lid. The
upgraded front spoiler lip and the rear spoiler lip made of CFR and now
10 millimetres or almost 0.4 inches higher, again in surface carbon
finish, ensure the right aerodynamic precision as well as extra
downforce.
The interior also exudes the flair of sporting
performance in virtually every detail, featuring lightweight bucket
seats made of carbon-fibre-reinforced plastic in carbon surface finish
and lightweight door panels with door opening straps. The basic interior
colour is black, contrasting attractively with features such as the
seat centre sections and the roof lining as well as segments on the
steering wheel rim. The gearshift and handbrake lever are both finished
in red alcantara.
Limited to just 500 units, the 911 GT2 RS will
be available in Europe from September 2010, in the USA from October
2010. The Euro base price is 199,500.- Euro. Including VAT and national
specifications/equipment the new 911 GT2 RS will retail in Germany at a
price of 237,578 Euro. 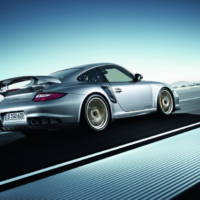 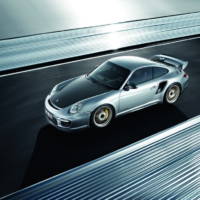 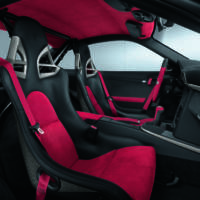 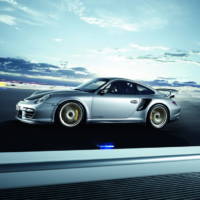 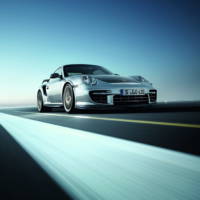 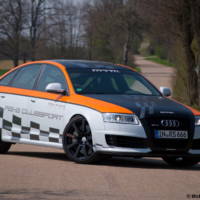 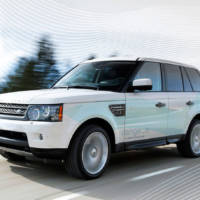