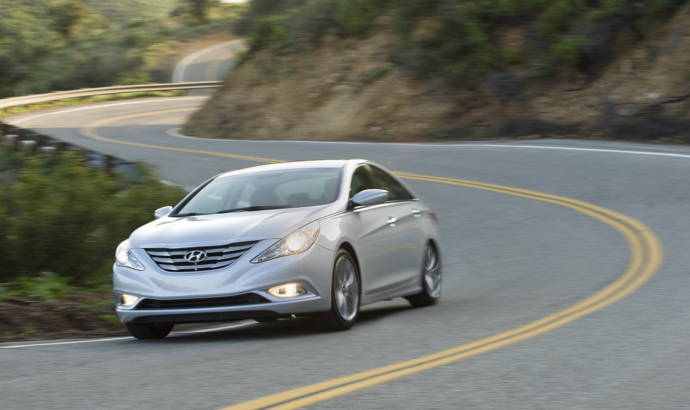 The Korean company debuted the 2011 Hyundai Sonata 2.0T version at this year’s 2010 New York Auto Show.
The 2011 Hyundai Sonata 2.0T features a 2.0-litre Theta II turbo engine with GDI (gasoline direct injection) that is capable of producing 274 HP and 269 lb-ft of torque from 1,800 to 4,500 rpm.
With this considerable power level the 2011 Hyundai Sonata 2.0T which will be available in SE and Limited trim levels is still able to return an estimated 34 mpg highway and 22 mpg
city.
On the 2011 Hyundai Sonata 2.0T Limited customers get a panoramic roof, 18 inch silver alloys, a dual exhaust system and paddle shifters for the 6-speed automatic transmission.
The 2011 Hyundai Sonata 2.0T was not announced yet.
Hyundai press release :
NEW YORK, march 31, 2010 – Hyundai Motor America debuted its
2.0-liter Theta II turbocharged gasoline direct-injection (GDI) engine
in the 2011 Sonata at the New York Auto Show today. With the addition
of the all-new 2.0-liter Theta II turbocharged GDI engine, the new 2011
Sonata offers an unprecedented combination of segment-leading fuel
efficiency and power – with an estimated 34 mpg highway rating, and 274
horsepower. Remarkably, the Sonata 2.0T produces these industry-leading
metrics on regular fuel…premium fuel is not required.
The new Sonata is the first Hyundai vehicle to have both GDI technology
and a turbocharger. By the end of Hyundai’s 24/7 version 2.0 product
initiative (seven new models in the next 24 months), four nameplates
will be available with GDI or the combination of GDI and a
turbocharger. Turbocharging and GDI are part of "Hyundai Blue Drive,"
the company’s environmental initiative to continue industry leadership
in fuel efficiency and sustainability.
"The Sonata 2.0T is a great example of what our Blue Drive product
strategy is doing for consumers," said John Krafcik, Hyundai Motor
America president and CEO. "Think about it – more horsepower than any
of our V6 competitors, with better gas mileage than any competitive
4-cylinder model. We’re not fans of compromising at Hyundai, and the
Sonata really demonstrates this aspect of our business approach."
The 2.0-liter turbocharged GDI four-cylinder engine in the 2011 Sonata
produces 274 horsepower at 6,000 rpm and 269 lb-ft of torque from
1800-4500 rpm with regular fuel. The Sonata 2.0T will deliver 22 mpg
city and 34 mpg highway (preliminary estimates). Hyundai’s turbocharged
engine features a twin-scroll turbocharger that when combined with the
GDI system results in instantaneous power delivery. Twin-scroll
turbochargers have traditionally been used on more expensive high
performance engines, but as with GDI, Hyundai has chosen once again to
apply this efficient technology in high volume to its most popular
model.
The 2.0T engine will be available on the SE and Limited trim level,
with the 2.0T Limited getting additional upgrades, including:

* Better pressure distribution in the exhaust ports and more efficient
delivery of exhaust gas energy to the turbocharger’s turbine
Essentially, Sonata’s twin-scroll turbo directs even more air into the
engine while a compressor increases the pressure entering the cylinder.
This allows the air entering the cylinder to be even more densely
packed for higher compression and better performance, contributing to a
more-efficient burn and fuel efficiency.
Two key features of Hyundai’s twin-scroll turbocharger setup are:
* The stainless steel exhaust manifold and the twin-scroll turbine housing are cast in a patent pending one-piece design
* The waste-gate for the turbocharger uses a motor-driven electrical controller instead of being mechanically controlled
Thanks to the integrated stainless-steel turbine housing with the
exhaust manifold, not only is the weight and cost of the casting
dramatically reduced, the durability of the turbine housing is also
improved.
By adapting the motor-driven electrical waste-gate, the boost pressure
is precisely controlled. The back pressure is reduced when turbo boost
is not necessary by opening the waste-gate, which improves fuel
efficiency. In addition, during cold starts, the waste-gate remains
open which results in faster catalyst light-off for reduced exhaust
emissions.
A GDI fuel delivery system contributes to improved fuel efficiency and
lower emissions. This shorter, more direct path of fuel delivery allows
for greater control of the fuel mixture at the optimum moment, thus
improving efficiency. The fuel is injected by a camshaft-driven, high
pressure pump that operates at pressures up to 2175 psi. Direct
injection also utilizes a higher-than-normal 9.5:1 compression ratio
while achieving a remarkable 137 horsepower-per-liter. The piston heads
are "dished" to increase combustion efficiency in the cylinder.
WORLD-CLASS POWER-TO-WEIGHT RATIO, RIGIDITY AND SPACE
One of the program targets for the 2011 Sonata engineering team was
world-class power-to-weight ratio. This philosophy was also applied to
the Sonata 2.0T, with the result of a best-in-class power-to-weight
ratio of 12.2 horsepower per pound, significantly better than any
mid-size sedan competitor, and even better than the performance-focused
Chevrolet Camaro V6. Power-to-weight ratio pays dividends in both
performance and fuel economy, and is the key to Sonata’s superior
performance in both of these areas.
Additionally, all Sonatas are rich in ultra-high-strength steel,
leading to world-class body rigidity. The 2011 Sonata is 25 percent
stiffer in torsion and 19 percent stiffer in bending rigidity than its
predecessor, yet it is lighter than most midsize sedans, also offering
more interior room.
SIX-SPEED AUTOMATIC TRANSMISSION
Hyundai’s commitment to making the Sonata 2.0T extremely fuel efficient
continues with a six-speed automatic transmission with SHIFTRONIC
manual control.
Hyundai’s all-new six-speed automatic A6LF2 transaxle is another way
the company is meeting its goals of improving fuel efficiency and
reducing emissions. Shifts are silky smooth with an option of manual
control through the SHIFTRONIC feature.
Drivers can access the SHIFTRONIC feature by moving the gear selector
into a separate gate. Pushing the selector forward or pulling it
rearward will shift the transmission up or down sequentially, adding to
driver control. Turbocharged Sonatas will also feature steering
wheel-mounted paddle shifters. A clear LCD readout on the instrument
panel shows the gear being used.
Designed for transverse engine applications in passenger cars and SUVs,
the new compact transmission puts Hyundai into an elite class of auto
manufacturers who have designed their own proprietary six-speed
automatic transmissions. The strength of the design is its unique
layout which makes it smaller, more compact and lighter than any other
six-speed transmission on the market today.
For the customer, the new six-speed delivers a performance edge. The
gearbox has no dipstick because it is filled with automatic
transmission fluid that is good for the life of the vehicle under
normal usage conditions, thereby reducing maintenance costs.
Developed over a four-year period, this new six-speed automatic is 26.4
pounds lighter than the five-speed it replaces. It is also 1.6 inches
shorter and considerably simpler, having 62 fewer parts, which is key
to increased durability, lighter weight and lower cost.
When it comes to transmissions, more gears are definitely better. The
addition of a sixth gear enables closer spacing between gear ratios
providing a better balance of performance and fuel economy while the
wide overall gear ratio helps deliver strong acceleration.
The gearbox has three planetary gearsets and a unique flat torque
converter that shortens the unit’s overall length by 0.47 inches. Four
pinion differentials improve durability and further minimize size.
Another example of engineering ingenuity is found in the design of the
hydraulic pressure control unit. Slight manufacturing deviations from
one solenoid valve to the next often cause fluctuation in the hydraulic
pressure and affect shift precision and quality. The transmission
featured in the Sonata cleverly integrates adjustment screws in the
valves that enable each of the eight valves to be calibrated at the
factory. This feature ensures stable hydraulic pressure at any shift
point which facilitates a high degree of precision and control needed
to deliver fast, smooth and precise shifts throughout the rpm range. 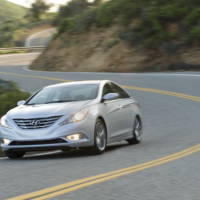 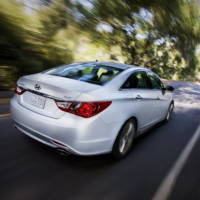 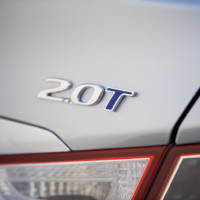 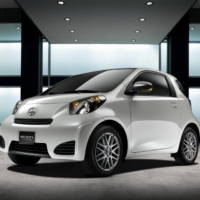 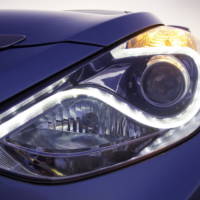