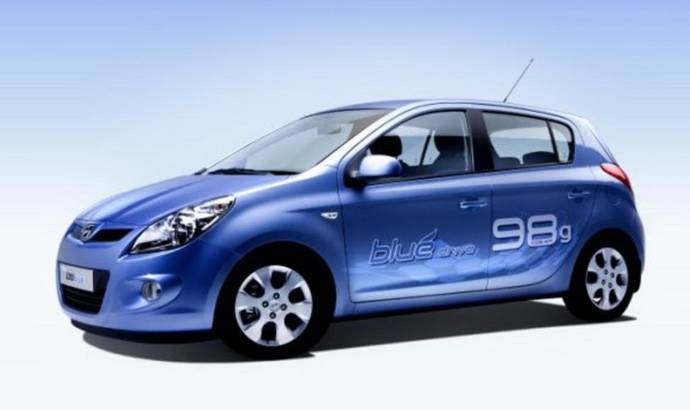 To Korean manufacturer has revealed the eco-focused 2011 Hyundai i10, i20 and i30 Blue Drive models at the Geneva Motor Show today.
Besides the 2011 Hyundai i10, i20 and i30 Blue Drive the automaker is also displaying the ix35 blue, the new i-flow concept and the facelifted i30.
The 2011 Hyundai i10 Blue will be powered by a 1.0-litre petrol engine delivering 69 PS @ 6,200 rpm and 94 Nm of torque. The 2011 Hyundai i10 CO2 emissions or 99g per Km.
The 2011 Hyundai i20 Blue comes equipped with a 1.4-litre diesel engine that generates 75 PS @ 4,000 rpm and 220 Nm of torque. With this engine the 2011 Hyundai releases only 98g of CO2 per Km and the car is scheduled to enter production next year.
As for the 2011 Hyundai i30 Blue power is extracted from a 1.6-litre unit that outputs 90 PS @ 4,000 rpm and 240 Nm of torque. The hatch and estate version 2011 Hyundai i30 Blue have CO2 emissions of 98g/km and 99 g/km respectively and production will also start next year.
Hyundai press release :
New look i30
In the shorter term, Hyundai is also bringing new style to the C-segment with a revised version of its i30.
Entering production in March, the new i30 incorporates a wide range
of improvements in design, specification and competitiveness.
The i30 builds on the strengths of the current i30 range, to keep
the model fresh and desirable. The new-look i30 does not stray far from
the original design, and instead merely accentuates the car’s aesthetic
qualities.
The redesigned radiator grille and air intakes bring the i30 in line
with Hyundai’s new-style corporate identity, epitomised by the
hexagonal frontal form. A reshaped, lower bumper and more angular fog
light recesses continue the visual enhancement around the front end.
The redesigned chrome garnish housing the Hyundai logo completes the
more dynamic new look. The refresh carries on into the flanks, where
extended side skirts and rear bumper add a sense of strength to the
car’s contemporary profile.
To complete the upgrade, the new i30 comes with Hyundai’s ‘Triple5’
package, including an enhanced five-year warranty with five year’s
roadside recovery.
Blue Drive takes i10, i20 and i30 under 100g/km
Hyundai has revealed its latest eco-focused Blue Drivevehicles. Four
new cars have resulted from the company’s leading-edge program: the i10
blue, i20 blue, i30 blue and ix35 blue.
The eco-friendly variants incorporate improvements in emissions
without compromising performance, reliability or driver satisfaction,
making Blue Drive models a realistic solution for modern motorists.
All employ the latest energy-efficient powertrain technology. The
new, downsized 1.0-litre Kappa petrol and 1.7-litre U2 diesel engines,
for example, are coupled with high-performance, low-friction engine
oil, to considerably reduce driveline friction. Dual continuously
variable valve timing, improved combustion efficiency, gear ratio
optimisation, and engine control optimisation to increase engine
efficiency.
A noticeable change from the driver’s perspective is the application
of a Hyundai-specific Idle Stop & Go (ISG) system.  This cuts the
engine when the car is stationary and restarts it when the clutch pedal
is depressed.
With ISG, an alternator management system is added to maximise
energy regeneration during braking and disconnecting the alternator
when it’s not needed.
It’s not just the engines which are more efficient. To minimise
drag, the Blue Drive models have improved aerodynamics and lower
rolling resistance.
Under body panels have been installed on all models to smooth
airflow under the car and certain models also feature reductions in
brake-pad drag on the discs. Wheels are also fitted with low rolling
resistance tyres, inflated to a higher pressure.
Through such innovations, engineers have succeeded in lowering the CO2 emission levels of the i10, i20, and i30 blue models to the sub-100g/km range.
The i10 blue, which goes into production at the end
of 2010, employs a new and extremely efficient 1.0-litre version of the
Kappa petrol engine, which produces 69PS at a lower rpm level of 6.200
rpm while generating 94 Nm of torque. By tweaking the aerodynamics and
refinements to the powertrain, CO2 emissions in the i10 blue have been reduced to just 99g/km.
The i20 blue features the U2 1.4-litre diesel
engine, designed and engineered at the R&D centre in Rüsselsheim,
Germany, and produces 75PS at a lower rpm level of 4.000, while
generating 220 Nm of torque.  The power train is mated to the latest
six- speed manual transmission.  Producing just 98g/km of CO2 emissions, the i20 blue is scheduled to go into production in 2011.
The i30 blue uses the U2 1.6-litre engine, which produces 90PS at 4.000 rpm, while generating 240 Nm of torque.  CO2
emissions of just 98g/km and 99 g/km for the hatchback and estate
models, respectively, will save customers tax and fuel. Production
commences in 2011 at the Nosovice plant in Czech.
The ix35 blue, which goes into production at the end of 2010, boasts an extremely impressive CO2
emissions figure of just 135g/km, positioning it not only as a rival to
leading C-segment SUV models but also to C-segment hatchbacks.
Another ix35 on display has taken CO2 emissions from the exhaust out of the equation altogether. Theix35 Hydrogen Fuel Cell Electric Vehicle,
making its debut of the show, moves Hyundai another step closer to the
commercialisation of hydrogen fuel cell electric vehicles.
The ix35 FCEV incorporates several important innovations over the
previous generation Tucson FCEV.  And with these improvements, Hyundai
is set to meet its goal of ramping up production volume of FCEVs into
the thousands by 2012. 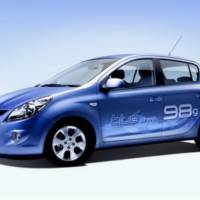 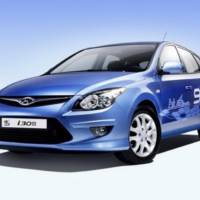 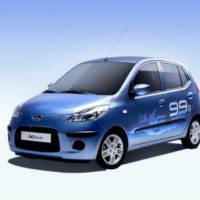 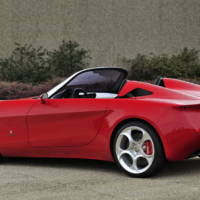 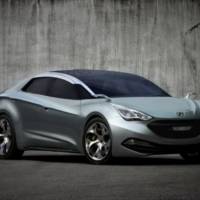