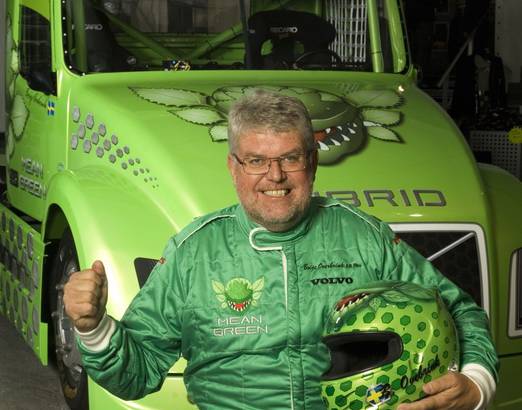 The world’s fastest hybrid truck – is not really an achievement yet, but a statement from Volvo Trucks who are planing to use the ‘Mean Green’ in spring 2011 and beat the world speed record for the standing kilometre.
The Mean Green is a project conducted by Volvo’s elite Hybrid technology experts, but it remains to be seen if the ‘world’s fastest hybrid truck’ is going to be a phrase they can use to brag about their achievement next year.
The Mean Green Volvo hybrid truck uses a standard 16-litre 700 HP engine equipped with twin turbochargers which can deliver a massive 1900 HP, and features a modified version of Volvo’s automated I-Shift gearbox so that the
transmission can interact with the truck’s electric motor.
The electric motor used by the Mean Green hybrid truck packs an additional 200 HP and 1100 Nm of torque which will translate in a lightning-speed boost from start-off without the diesel-engine ‘lag’.
Volvo press release :
‘Mean Green’ is a unique hybrid truck built by an enthusiastic team at Volvo Trucks. They plan to use it next spring to beat the world speed record for the standing kilometre and behind the wheel is Swedish truck racing ace, Boije Ovebrink.
“The absolute elite among Volvo’s hybrid technology experts are the driving force behind the project. They are true enthusiasts, every last one of them. I’d go so far as to say that ‘Mean Green’ is the world’s fastest hybrid truck,” says Ovebrink.
To understand how he can make this claim with such confidence, we need to rewind to November 2007. Ovebrink had just beaten his own standing kilometre record from 2001 for trucks with a maximum displacement of 16 litres. He achieved this by reaching an average speed of 158.829 km/h with his red Volvo NH16 – a.k.a. ‘The Wild Viking’. After winning he met Staffan Jufors, President and CEO of Volvo Trucks, who asked him, “Do you plan to sit down and twiddle your thumbs now, enjoying the fame that comes with being world champion or do you have any new ideas?” Ovebrink replied: “I’d like to build the world’s fastest hybrid truck.”
“The idea met with approval, but at the time I had no idea about the fantastic technology Volvo had in the pipeline,” he recalls.
Planning for the hybrid got under way, but suddenly, however, a Czech truck racing team claimed they had beaten Ovebrink’s record. Order had to be restored, so that spring, Volvo engineer Olof Johansson got down to some serious work. He started building a truck that could retake the record, but that could also be reconfigured for the planned racing hybrid driveline. That truck is now called ‘Mean Green’. But the team decided not to install the hybrid driveline straight away.
“I started building the truck from two half frames that had been earmarked for the scrap yard and the American VN cab came from a crash-tested chassis whose cab was totally intact,” he explains.
Weight reduction was absolutely crucial to setting new records. For example, the front axle was milled by experts from Volvo’s engine factory in Skövde, Sweden and reduced from 100 kgs to 57 kgs. Then the gear set for first gear was removed from the gearbox, shaving another seven kgs off.
“I slit open the wiring harnesses and removed unnecessary wiring. That slashed almost six kilos,” says Johansson.
Ovebrink was also ordered to lose weight, as he recalls, “They made me promise to lose 20 kilos and, so fa,r I’m half-way to my target.”
Designer Jonas Sandström at Volvo put in many hours with his CAD program to come up with the optimal aerodynamic shape.
“It’s important that the wind breaks away from the bodywork in the right way. Our truck differs from a Formula 1 car, for instance, in that the aerodynamic properties allow the truck to slice through the air rather than be pressed down onto the road surface,” he explains.
Just a few days before the assault on the record, it was announced that FIA, the international motorsport organisation, had disallowed the Czech team’s result. Still, there was no need to cancel the planned attempt on the record. Ovebrink and the Volvo team were aiming to further improve on the 2007 record – and on June 9th 2010 they did just that. The new world record for the standing kilometre was set at a two-way average speed of 166.7 km/h. Top speed was in the region of 260 km/h.
Once this was achieved, focus reverted to what the entire project had been about from the very outset.
“Olof immediately went on the offensive. The very same day the new record was set; he pulled out his toolbox and started modifying the truck to build what we see today – a thoroughbred hybrid.”
The truck already had a standard Volvo 16-litre 700 hp engine with equipment including twin turbos from Volvo Penta. It was a powerplant delivering a massive 1900 horsepower. The truck retained that unit. However, the lightened Powertronic auto-shifter was replaced with a modified version of Volvo’s automated I-Shift gearbox so that the transmission could interact with the component that makes ‘Mean Green’ a hybrid – its electric motor.
“This gives an additional 200 horsepower and 1100 Newton metres of torque. The result is a lightning-speed boost from start-off without any of the customary diesel-engine ‘lag’. It’s like a champagne cork, but without the sound effects. For the first couple of seconds, the truck just makes a slight whistle until the diesel engine, which runs on renewable liquid rosin diesel, starts delivering with explosive force – by which time the truck is already doing 60 km/h and I can engage ninth gear,” explains Ovebrink.
So, when is ‘Mean Green’ going to make its bid for the standing kilometre record ? “This November we’ll test race it at Volvo’s Hällered proving ground to see what it’s capable of. Then, as soon as the winter snows disappear early next spring, we’ll set our record.” says Ovebrink, confidently. 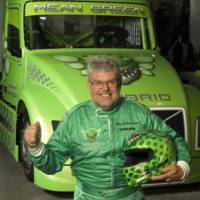 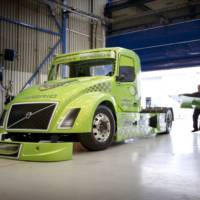 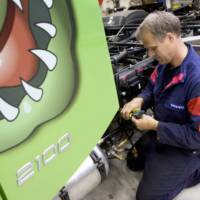 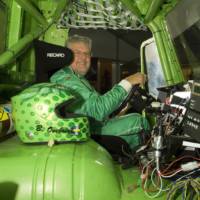 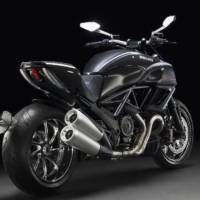 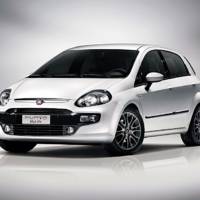