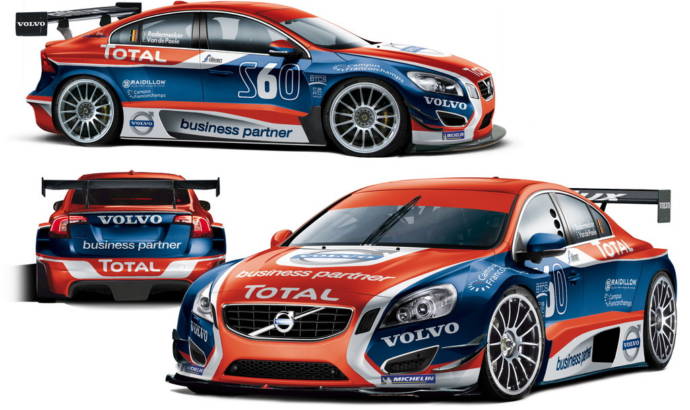 The Volvo S60 BTCS was unveiled yesterday and the this racing version model will compete in the Belgian Touring Car Series starting from April 11.
The Volvo S60 BTCS has been developed by the company’s Racing Team in compliance with the BTCS Silhouette S1 regulations and features a tubular chassis, the same kind of suspension both front and back and a standardised 3.5-litre V6 engine that packs 410 horsepower and 412 Nm of torque.
Power is delivered to the rear wheels via a 6-speed sequential gearbox while a set of high performance brakes with 6-piston callipers and 380 mm front/355 mm discs front and back offer the necessary stoppage force.
The Volvo S60 BTCS uses 18 inch wheels wrapped in Michelin tires 27/65/18 front and 30/65/18 rear.
Volvo press release :
Just weeks after the all-new Volvo
S60 was introduced to the public, the latest Volvo model is also being
unveiled in a racing version. Volvo Cars Belgium will enter the new car
in the 2010 season of the Belgian Touring Car Series. Volvo fans will
not need to wait long to see the latest model in action since the
premiere takes place on April 11.
"We
are very happy about this development," says Bart Crols, Managing
Director at Volvo Cars Belgium. "The all-new Volvo S60 sports sedan is
Volvo’s most exciting driving experience so far and there is no better
way to show this than by bringing it to the race track. Volvo and the
all-new S60 have a special place in the people’s hearts here as several
Volvo models, including the new S60, are built in Belgium at theVolvo
Cars Ghent plant."
The new Volvo
S60 race car has been developed in record time locally by Volvo’s
Belgian S60 Racing Team. It has been developed in accordance with the
BTCS Silhouette S1 regulations which put a major emphasis on
standardised features. All cars must use a tubular chassis, the same
type of front and rear suspension and aerodynamics. A uniform type of
engine specification is also available but manufacturers are allowed to
use own engines.
The Volvo S60 Racing Team will
also operate the car at all BTCS races and the drivers are Vincent
Radermecker and Eric Van De Poele.
Its maiden track test will take place on April 1 (today) on the Belgian Zolder track.
"It
has been a hectic period, but we have received great assistance from
Volvo Cars’ Motorsport department" says Thomas Neri, Team Manager for
the Volvo S60 Racing Team. He continues: "Our main objective is to get
up to speed and to compete well in the various heats. Next season we
hope to put our own in-house developed engine in the car."
BTCS – low cost, high-performance racing
The
BTCS is an endurance racing championship with six competitions on
tracks such as Spa-Francorchamps, Zolder and Dijon. Each race consists
of two 90-minute heats and there is also one 12-hour race in Spa. The
all-new Volvo S60 will face intense competition from the likes of BMW,
Audi, Jaguar and VW. BTCS has grown rapidly in terms of both competing
brands and numbers thanks to its low-cost, high-performance combination
and, not least, the fact that the cars have considerable visual appeal.
The race series is televised in several countries and is gaining in
popularity.
"We will support and
follow our development in this series very closely as several other
national championships are considering similar standardised regulations
in the future," says Derek Crabb, Motorsport Director at the Volvo Car
Corporation. "This BTCS campaign will give us a good understanding of
what these types of regulations can mean for Volvo."
Technical Specification Volvo S60 BTCS 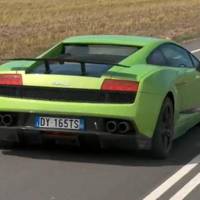 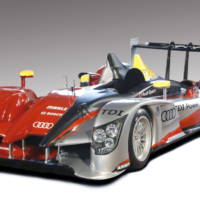