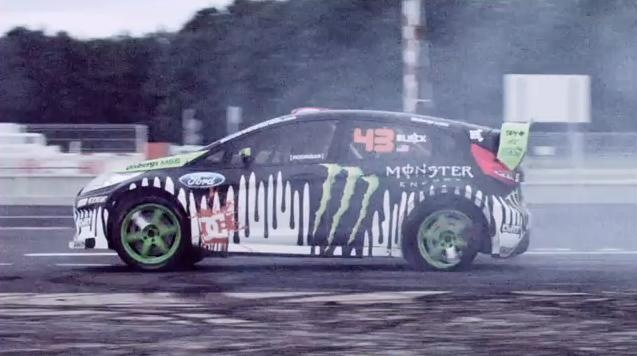 Here it is, the newly launched video of the Gymkhana THREE, Part 2. If you were a little bit disappointed by the part 1 of Gymkhana 3, then we think the second part makes up for it.
In Gymkhana THREE, Part 2, Ken Block is using the ‘Autodrome de Montlhery’ facility in France as the ultimate playground for his custom Ford Fiesta WRC.
Just to give you a better picture, Block’s Gymkhana THREE Fiesta was built by Olsbergs Motorsport Evolution (MSE), and the 850 HP engine powering it (which is restricted to 650 HP) is linked to a 6-speed paddle shift sequential gearbox that is harnessing the 660 lb-ft of torque.
The Gymkhana THREE Fiesta accelerates from 0 to 60 mph in 1.9 seconds and the car’s body features a mean looking front bumper, a carbon splitter and wider fender flares.
As for the Gymkhana THREE, Part 2 video, it is better to see it for yourself than to read about it.
Ford press release :
Ford’s hot-selling Fiesta is the star in the next chapter of Rally
Driver Ken Block’s Gymkhana video series, which debuts today on You Tube.
Ken Block’s Gymkhana THREE Part 2; Ultimate Playground: L’Autodrome,
is the latest installment in the series of Block’s popular online
videos, was filmed at the Autodrome de Montlhéry facility in France
and shows the modified Fiesta doing stunts that only Block can deliver.
“When Ford partnered with Ken Block for the Fiesta and WRC rally
programs, the opportunity to participate in projects like Gymkhana
THREE was an attractive part of the overall package,” said Jamie
Allison, Director Ford North America Motorsports. “Ken and the Monster
World Rally Team have brought the spotlight to Fiesta throughout the
rally season and at X Games, but now with the release of Gymkhana THREE,
millions more around the world will be able to see how fun it is to
drive a Fiesta.”
For Monster World Rally Team driver and DC co-founder Block, the
opportunity to push the limits of his car control while maneuvering
around a series of cones, slaloms, 180-degree and 360-degree and
figure-eight turns and other obstacles, all while utilizing extreme
acceleration, braking and drifting is pretty much the definition of
fun.
The Autodrome facility was selected for both being able to provide a
professional racetrack as well as pre-built obstacles that allow for
unique stunts, most notably, the steep 51-degree banking of the
high-speed oval.  The Gymkhana THREE is also the first in the series to
have stunts performed in the rain.
“The great thing about Gymkhana is that it is amazingly fun to do,”
said Block. “It’s taking some of the best parts of rally racing and
removing a bit of the stress that is involved with competing, allowing
me to just go out and play in an amazing car.  Having done two videos
before I knew exactly what I wanted from the car as we built it and I
can say that the Fiesta is the best Gymkhana car yet.”
The Gymkhana THREE Fiesta, designed by DC, is emblazoned with
similar livery to Block’s Monster World Rally Team Rally America Fiesta
and his Focus RS WRC; however, the “drip pattern” livery is larger and
more pronounced than the rally car’s design.
The carbon fiber hydraulic e-brake handle has been changed to a
custom-made metal piece, with Ken’s Huck Gee skull logo and No. 43
engraved into it. While Block’s trademark “43” is on the car, it is not
in the standard door location, but displayed in the side rear windows.
Built by Olsbergs Motorsport Evolution (MSE), the 2,425-pound
Gymkhana THREE Fiesta sports a purpose-built Olsbergs engine capable of
up to 850 brake horsepower, but is restricted to
650 horsepower to give Block the torque band needed to control the car.
Equipped with an Olsbergs MSE Maktrak (magnesium) six-speed
paddle-shift sequential transmission, it is capable of 660 lb.-ft. of
torque at 4,000 rpm and needs a mere 1.9 seconds to go from 0 to 60
mph.
The car’s body has been altered with an aggressive new front bumper
design inspired by road racing cars. It has a carbon splitter, which
improves aerodynamics, unlike the rally car’s bumper, which is built
for gravel stage durability. The fender flares are also much wider and
more squared off for an aggressive look.
The Gymkhana THREE Fiesta started as a production 2011 Fiesta before
going through a conversion by Olsbergs MSE, the same group that runs
Block’s Rally America program. The production Fiesta is an excellent
platform for the Gymkhana car. The nimble ride and the
ultra-high-strength boron steel body are ideal for the demands of the
Gymkhana course. A testament to the Fiesta platform is that Fiesta has
been designated as Ford’s worldwide rally car in both WRC and Rally
America starting in 2011.
In his first year with Ford, Block has maintained a high profile
within the Ford Racing program. He is currently starring in his second
national TV commercial, this time with NASCAR legend Richard Petty and
driver A.J. Allmendinger, which highlights Ford Racing’s national
promotion “43 Fiestas” (www.43fiestas.com). The 10-week campaign brings
some of Ford Racing’s biggest personalities together into a national
broadcast and digital campaign designed to promote the 2011 Ford
Fiesta.
“If Ken is involved in a program, his legions of fans passionately
follow whatever he is doing,” said Scott Denby, Ford Racing business
manager. “There aren’t many personalities in pop culture that can
generate tens of millions of views on YouTube, let alone personalities
in motorsports. Whether through Gymkhana THREE, 43 Fiestas or Rally,
Ken’s ability to connect with his audience is unparalleled and Ford is
proud to have Ken on our team.”
Video: Gymkhana THREE, Part 2


SEE ALSO:  Travis Pastrana and Subaru to feature in the next Gymkhana
Source: Ford
Share this 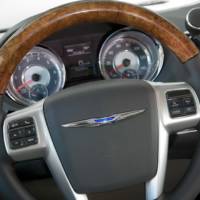 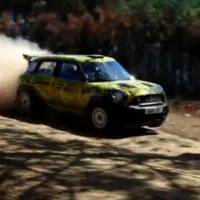