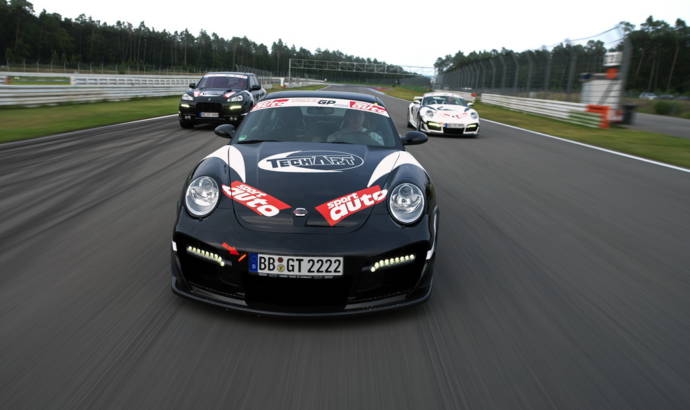 At this year’s Tuner Grand Prix competition on the Hockenheimring race track the Porsche 911 GT2 based TECHART GTstreet RS won first place in the GT Turbo Class. Victory came after driver Jorg Hardt managed to distance himself from the rest of the pack leaving them with no chance with an average lap time 0.604 seconds faster than the team in second place.
The TECHART GTstreet RS Porsche 911 GT2 has a powerful 700 bhp (515 kW) engine under the bonnet, that is able to develop 860 Nm at 4,500 rpm and reach a top speed of 350 Km/h thanks in part due to its modified VTG turbochargers.
Marc Herdtle, Marketing Director at TECHART says that “With the victories also racked up this year, TECHART is underscoring its outstanding position in the automotive individualization sector.
Techart press release :
Top times for TECHART at this year’s Tuner Grand Prix at the Hockenheimring race track. Behind the wheel of the TECHART GTstreet RS based on Porsche 911 GT2, racing driver Jörg Hardt left the competition with no chance and won the duel in the GT Turbo class. This meant that he was able to repeat last year’s victory. The sport auto Tuner Grand Prix is the world’s largest trial of strength in the tuning sector.
The TECHART-modified 911 GT2 won with an average lap time of 1:08.037 minutes over five laps driven around the small circuit of the Hockenheimring race track. This means that the team drove precisely 0.604 seconds faster than the team in second place, and went on to claim overall victory for all the classes entered. Thanks to modified VTG turbochargers, the engine generates 700 bhp / 515 kW at 7,000 rpm and puts down a maximum torque of 860 Nm onto the tarmac at 4,500 rpm. The car is capable of top speeds of up 350 km/h.
Besides the driving skills and high-performance engine, the decisive factor for this victory was above all the perfectly tuned suspension. In collaboration with the technology partners Bilstein and Michelin, the height-adjustable TECHART sports suspension was perfectly tuned to the circuit.
For the time trial, the TECHART team opted for high-performance Michelin Pilot Sport Cup tires on account of the summer temperatures. Running on the single-piece TECHART Formula GTS light alloy rims in the dimensions 8.5Jx20 at the front and 12Jx20 at the rear, the Michelin tires ensured outstanding grip. The winning driver, Jörg Hardt, who has been racing successfully in motor sports for years, was utterly impressed: “The car had been prepared extremely professionally for the event. The tires performed steady and kept a very high level during the whole competition”.
In addition to the victory in the GT Turbo class, Jörg Hardt and the TECHART team also performed exceptionally well in the Coupé / Cabriolet-turbo class. The TECHART GTstreet R Cabrio on the basis of the Porsche 911 Turbo Cabriolet took first place like last year. Achieving a time of 1:09.601, the car had a 3.186 second advantage over its competitors.
Jörg Hardt perfected the triumph by coming first in the SUV class. The TECHART Magnum, based on the Porsche Cayenne Turbo S, was entered into the race. Equipped with the 550 bhp of the production vehicle, an aerokit and sports air suspension module, TECHART achieved the winning time of 1:16.939 for the first time in the heavyweight class. The necessary grip was ensured by the Michelin Diamaris sport tires fitted on 22 inch TECHART Formula rims.
“With the victories also racked up this year, TECHART is underscoring its outstanding position in the automotive individualization sector”, says Marc Herdtle, Marketing Director at TECHART Automobildesign GmbH, in recognition of these achievements. 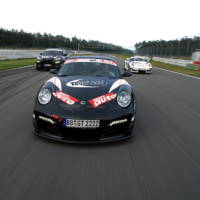 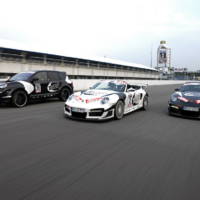 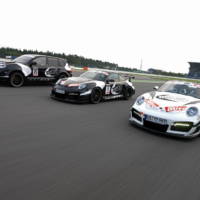 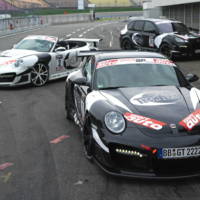 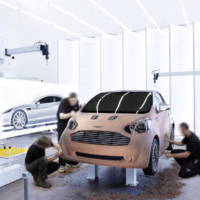 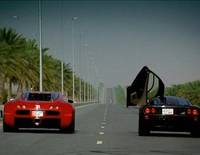