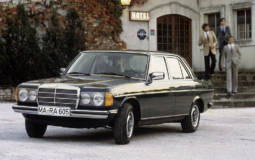 Mercedes-Benz is celebrating the 40th anniversary of the mighty W123, the predecessor of the current E-Class. The W123 was introduced in January 1976 and was an instant success. According to the German car manufacturer, the first year production run was sold shortly after the launch. As a result, Mercedes-Benz has developed a variety of versions. We are talking about a coupe, an estate and also a long-wheelbase that was 24.8 inches longer than the standard model.