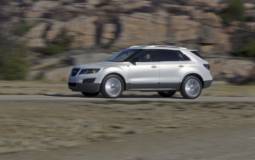 The 2011 Saab 9-4X has just been revealed through a set of photos that present both the exterior and interior. Public debut for the 2011 Saab 9-4X will take place at the Los Angeles Motor Show in November and the new mid-size crossover will debut on the US market in August 2011.

The 2011 Saab 9-4X extracts power from a 3.0-litre V6 developing 265HP, while a direct-fuel injected 2.8-litre turbo V8 producing 300 HP will also be available. Both engine options will use a six-speed automatic transmission and at this point performance or consumption figures are still unknown.