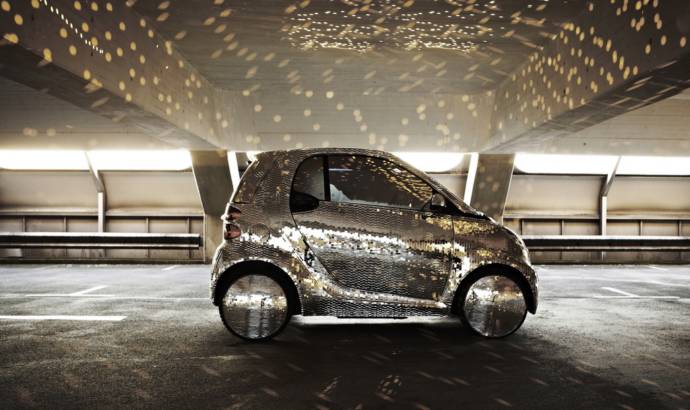 What better way of using an electric Smart ForTwo than covering it with reflective glass tiles and turning it into a disco ball right?
This unusually customised electric two-seater represents the creation of an experimental artist formation called ‘Apparatjik’ and will appear in a movie name ‘Pixel City’. The Smart ForTwo Disco Ball was presented at the Nationalgalerie in Berlin, and like we’ve already said, everything from roof to hub caps, windows and wheels was covered with shiny tiles that will make you feel like dancing in an instant 🙂
The Apparatjik project who is sponsored by Smart contains well known names from the music industry like Magne Furuholmen of a-ha, Guy Berryman of Coldplay or Jonas Bjerre of Mew. Their mission, besides playing at concerts, is collecting data that will be turned into a song which will be pe performed by the Deutsches Kammerorchester.
Daimler press release :
Always surprisingly different: smart presents an electric two-seater in a glitzy ‘disco-ball’ look in Berlin. This smart fortwo electric drive is completely covered in reflective glass tiles from the roof to the hub caps and the windows also feature a mirror finish. The one-off model was conceived by the experimental artist formation ‘Apparatjik’ to be used in a film titled ‘Pixel City’, realized for their current installation at Neue Nationalgalerie in Berlin. The project is brought to a climax by two very unusual live performances on the 26th and 27th of March.
smart is the official main sponsor in this project by Apparatjik, consisting of world-famous musicians Magne Furuholmen of a-ha, Guy Berryman of Coldplay, Jonas Bjerre of Mew and sought-after music producer Martin Terefe. Their "Apparatjik Light Space Modular" features not only concerts but also an interactive installation which collects data to be turned into a piece of music. The deriving song will be performed by the prestigious Deutsches Kammerorchester and accompanied by a spectacular image show titled ‘Apparat TV’. The projections will be streamed out of a six metre tall cube into the city through the museum’s glass walls. Inside that cube is where Apparatjik will be performing live on 26 and 27 March. Tickets can be purchased over 01805/88 00 15, via www.apparatjik.com
During their stay in Berlin Apparatjik members Magne Furuholmen and Martin Terefe took the opportunity to discover the German capital in the Discoball smart. Impressions of their trip are documented in a smart filmlet which can be seen over the smart Youtube channel www.youtube.com/smart 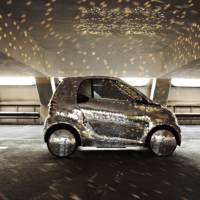 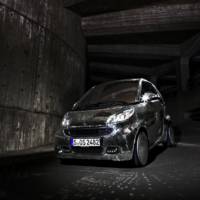 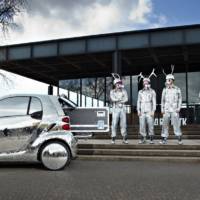 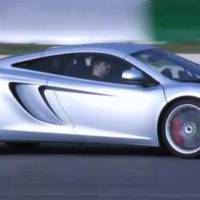 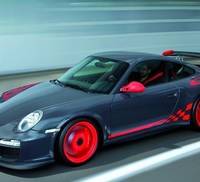