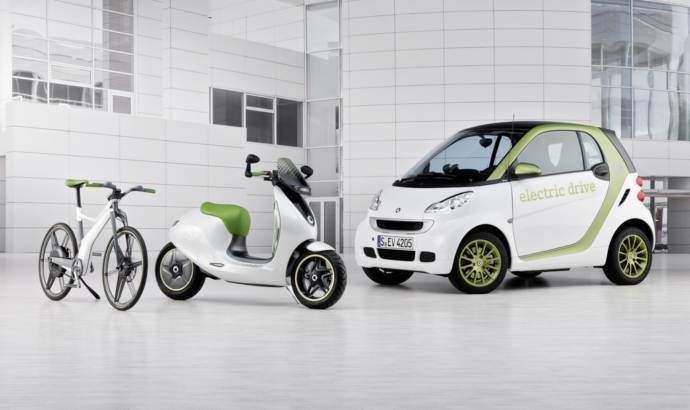 Besides the escooter, Damiler will also bring the smart ebike at this year’s Paris Motor Show.

The smart ebike is a high-tech bike with four electric boost levels offered by its power-electric hybrid drive. The smart ebike works different than the smart escooter, meaning its powering system is not incorporated in the rear wheel, instead it delivers extra power when the rider is pedals.

This electric drive system enables effortless biking as well as sporty use, and it is set up to gt disabled when the bike reaches 25 Km/h.

With a weight of 22 Kg, the smart ebike is one of the lightest in its class and depending on the level of assistance the bike has a range per battery charge of 30, 50, 70 or 90 kilometres.

The smart ebike also offers a smartphone integration system, which can use an iPhone as a control and communication centre plus check battery charge status, average speed, navigation and more.

With the new ebike, smart is presenting its second idea for locally emission-free electric mobility on two wheels. The trend-setting electric bicycle study, which will be premiered at the Paris Motor Show 2010 together with the highly regarded smart escooter is suited for both effortless city biking and sporty use. Unlike the scooter, the ebike´s drive is not controlled via the throttle grip. Instead, it delivers extra power when the rider pedals. The muscle power-electric hybrid drive offers four power levels. The high-tech bike also sets standards in terms of appearance and concept, starting with the futuristic look and the discretely designed lightweight wheels to the technical features in detail. Characteristics that the ebike and the escooter have in common are typical smart design features, simple handling and the integration of smartphones: the smart drive kit app that has been further developed also performs numerous functions for the ebike, for example those of a speedometer and a navigation system.

In addition to its eye-catching design and innovative technology, the new smart ebike has a special feature: its versatility. The electric drive conserves the rider’s strength in everyday use – for example on the way to school, university or work. Thanks to “electric power”, there is no longer any need to be afraid of hills. In addition, the high-tech ebike is simple to operate without conventional gear shifting.
At the same time it is great for a sporty workout: the electric drive integrated in the rear wheel does not offer unlimited assistance and is automatically cut off at 25 km/h. Besides, the rider’s fitness is the only thing to limit the maximum speed that can be achieved. And incidentally, “pedelecs” (Pedal Electric Cycle) have a further practical advantage for all “bikers”: no driving licence is needed as they do not reach electrically driven speeds above 25 km/h.

Dr Annette Winkler, head of smart, says “The brand smart becomes even more electric with the ebike: Following the fortwo and the escooter, many old and new smart fans may choose the way they move in the city even more individually and adapt it better to their individual life, the weather and their personal mood. People of all ages, with or without a driving licence, fit or not will enjoy experiencing the world by bicycle, also over longer distances. As long as power and shape suffice, the own fitness is the “engine”. But also if the electric drive is started, the ebike remains locally emission-free – except of one own´s breath. With a long range of typical attributes such as the character defining design and the safety features, also the bike shows: smart is intelligent.”

The smart ebike boasts a clear design idiom and an “uncluttered” independent appearance. The frame construction is obviously solid and at the same time also very elegant. It consists of aluminium profiles that are lightweight yet torsionally rigid thanks to large cross sections and ensures a strong direct connection between the steering-head bearing and the crankcase. The smart ebike weighs approximately 22 kilograms, making the smart among the electric bicycles one of the lightweights in its segment.

The rear wheel is also suspended by large and accordingly sturdy aluminium profiles, which means that there is no need for the supporting struts usually found in the rear wheel area of other bicycles. Technical components such as Bowden wires or cables are not visible and this contributes to the harmonious and clear overall impression.

The design of the cladding on the lower frame segment is based on the bodypanels of the smart fortwo and underlines the affiliation with the brand. The dynamic look is rounded off by filigree 26 inch lightweight wheels with six double spokes which enhance ride comfort thanks to good intrinsic damping, and can also cope well with rough road surfaces or a “short cut” over a kerb.

The smart ebike was designed and realised in cooperation with the Berlin e-bike manufacturer GRACE based on concrete ideas and specifications from the smart designers. The company specialises in high quality and fully integrated electric bikes. The project was led by Karlheinz Nicolai, who enjoys an excellent reputation in the two-wheeler industry as a developer and design engineer of high-tech bicycles.

Active bend lighting for maximum visibility in the dark

The front headlamp, which is not fitted on the frame but rather integrated in the handlebar, provides for greater active safety. It has the same effect as active curve illumination on cars: the state-of-the-art full LED headlamp follows every steering movement and ensures the best possible illumination of the area in the direction of travel. This solution – like the LED rear lamp integrated in the underside of the saddle – also adds to the pleasing aesthetics as these two mounted parts are positioned so elegantly that they do not interrupt the overall styling.

According to the technical definition, the ebike has a hybrid drive – a combination of muscle power and an electric drive. The electric “booster” is a 250 watt brushless direct current wheel hub motor that is integrated in the rear wheel. The propulsion current is stored in a compact lithium-ion battery with voltage of 36 volts and capacity of 9.6 Ah. The battery pack is housed above the pedal crankcase on the frame and is concealed by the frame panelling. The charge socket for the battery charger is located below the pedal-crank bearing. The ebike can be charged at any normal household socket – just like a notebook. The battery can be fully charged in two to three hours. The energy recuperated during braking is stored in the battery during the journey.

Plug and play: insert smartphone – and off you go!

Like on the escooter, a smartphone is also used on the ebike. It assumes various functions during the ride, for example those of a speedometer or a heart rate monitor. At the same time the smartphone is both a “starter” and an immobiliser: when it is placed in the specially designed mount it automatically activates the drive system. When the rider removes the smartphone the ebike is automatically locked and protected against theft.

The electric drive is switched on as soon as the rider starts pedalling like on a normal bicycle. Muscle power is also transmitted to the rear wheel in accordance with the classic bicycle principle: from the pedals via the crank bearing to the final drive. A special feature of the ebike is that a belt pulley and a toothed belt assume the tasks of the chain wheel and chain. These are silent and – like the other components of the drive system – they do not require any maintenance.

The rider decides how much power he wants the electric drive to deliver to support his muscle power by pressing a button on the handlebar. There is a choice of four power levels with the fourth and strongest level providing maximum pushing power. Depending on the level of assistance the bike has a range per battery charge of 30, 50, 70 or 90 kilometres – more than ample for the distances covered in everyday use. If the rider changes the “booster” power during the journey, the remaining range will vary depending on the power used. The gear ratio is automatically adjusted in two levels depending on the speed. The maximum speed depends on the terrain and the energy expended by the rider. At a speed of more than 25 kilometres per hour the electric drive automatically stops providing assistance – and the ebike becomes a pure “muscle bike”.

The front and rear wheels are each equipped with a state-of-the art hydraulic disc brake for safe and efficient braking. In addition, the rear wheel is braked “electrically” via the resistance of the wheel hub motor. When the brakes are applied, the operating principle is reversed, and the drive becomes a generator whose resistance provides the required braking effect – just like on the escooter. The resulting braking energy is recuperated, i.e. it is converted into electrical energy and stored in the bike’s lithium-ion battery.

The smartphone as a control and communication centre

As well as its functions in controlling the vehicle, the smartphone – which is charged during the ride – also serves an important role as a trip computer. During the ride it informs the rider about the battery charge status and the present and average speed, and it can also be used as a navigation system. Furthermore, the rider has mobile internet access via the smart drive kit app and can use numerous further applications such as internet radio, music playlists and telephone book. A GPS tracking function also shows where the bike is parked.

Additional smartphone-specific applications are conceivable for the further development. For example, on winter or rainy days and whenever four wheels are the more practical alternative, networking with the successful car2go mobility concept is possible. All in all the new ebike perfectly embodies the smart philosophy of intelligent urban mobility that is consistently geared to sustainability. Like its automotive counterpart, the smart fortwo electric drive, it offers numerous convincing advantages – ecologically, economically and functionally. Exemplary environmental compatibility is guaranteed in every respect. On the one hand the ebike has no local emissions and does not need any fossil fuels or lubricants. On the other hand all components are 100 percent recyclable. It combines low operating costs with functional advantages – from simple operation to the fact that finding a parking space in the city is not an issue at all for ebikers. Furthermore, in addition to practical advantages in everyday use, the integration of the smartphone means that the ebike is also easy to integrate in new mobility concepts. 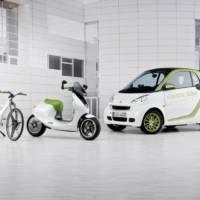 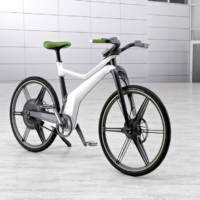 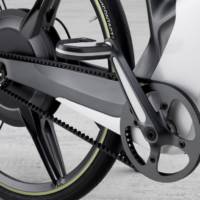 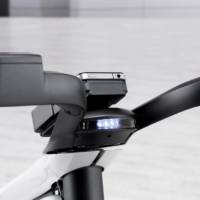 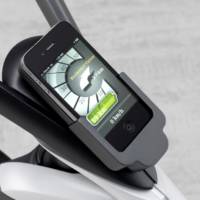 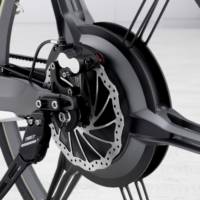 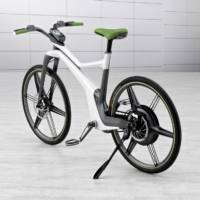 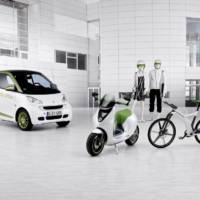 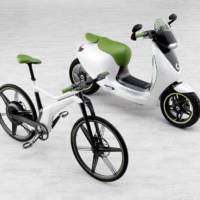 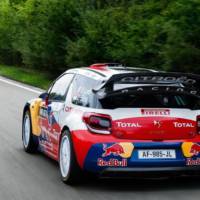 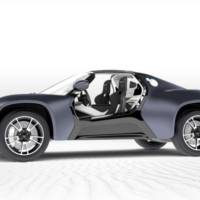