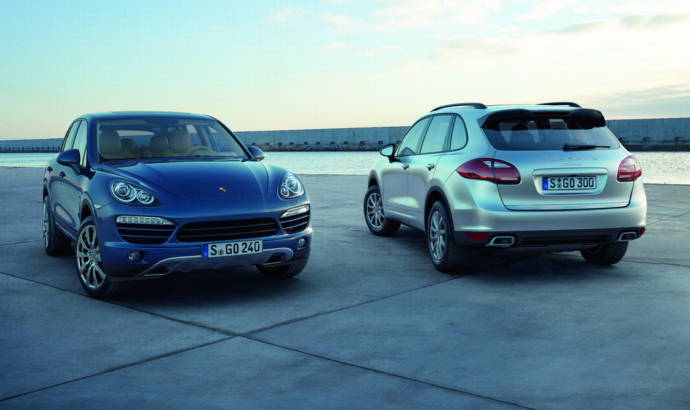 Deliveries for Stuttgart’s new generation SUV is beginning so the company has announced the Porsche Cayenne and Cayenne Diesel price.
The new Porsche Cayenne equipped with Tiptronic S returns 28.5 mpg, while the Cayenne Diesel enables 38.2 mpg, meaning a 20 percent higher efficiency on both models which also have CO2 emission levels below 200 grams per Km.
The Porsche Cayenne extracts 300 HP (220 kW) from a 3.6-litre V6 that enables 0 to 100 Km/h acceleration in 7.5 seconds while the Cayenne Diesel sprint from 0 to 100 Km/h in 7.8 seconds thanks to the 240 hp (176 kW)3.0-litre V6 from under the bonnet.
The Porsche Cayenne and Cayenne Diesel price starts at Euro 55,431 Euro and 59,596 respectively and both include Germany’s value added tax.
Porsche press release :
Stuttgart. Starting deliveries of the two
six-cylinder models Cayenne and Cayenne Diesel, Dr. Ing. h.c. F. Porsche
AG, Stuttgart, is rounding off the market launch of the Company’s new
generation of SUVs. Both models combine features typical of the Cayenne
such as highly comfortable sportiness and superior offroad driving
qualities with truly outstanding efficiency on average fuel consumption
of less than 10 litres/100 kilometres or better than 28.3 mpg imp.
Equipped
with Tiptronic S, the new Cayenne offers average fuel consumption in
the New European Driving Cycle of just 9.9 ltr/100 km, equal to 28.5 mpg
imp, about 20 per cent better than on the former model. On the Cayenne
Diesel fuel consumption is also down by 20 per cent from 9.3 to 7.4
ltr/100 km, that is an improvement from 30.4 to 38.2 mpg imp.
A
further important point is that the diesel, reducing CO2 emissions to
195 g/km, remains below the important limit of 200 grams CO2 per
kilometre. And last but not least, both models comply in full with the
Euro 5 emission standard.
The significant reduction of fuel
consumption throughout the entire Cayenne model range comes, among other
things, from the introduction of the new Tiptronic S eight-speed
automatic transmission with Auto Start Stop and an extra-wide spread of
gear ratios. Other factors are thermal management and recuperation of
the on-board network as well as, not least, a significant reduction of
weight thanks to intelligent lightweight engineering. These improvements
also serve to provide even greater agility, performance and driving
dynamics and, as a result, even greater driving pleasure.
The
Cayenne is powered by a 300 hp (220 kW) 3.6-litre V6 petrol engine
combined in standard trim with a six-speed manual gearbox. This
accelerates the Cayenne from a standstill to 100 km/h in 7.5 seconds
(Tiptronic S: 7.8 seconds) and provides a top speed of 230 km/h or 143
mph.
The three-litre V6 power unit in the Cayenne Diesel delivers
maximum output of 240 hp (176 kW), accelerating the car from a
standstill to 100 km/h in just 7.8 seconds. Top speed is 218 km/h or 135
mph.
The Cayenne Diesel comes as standard with eight-speed
Tiptronic S automatic transmission featuring an Auto Start Stop
function.
The new Cayenne offers even greater driving pleasure
than before both offroad and onroad, combined with even greater everyday
driving value, comfort, and elegance. To give driver and passengers
even more space within the interior, together with greater variability,
wheelbase is up over the former models by 40 millimetres or 1.6”. The
overall increase in length, on the other hand, is 48 millimetres or
1.9”. The rear seat bench adjusts to-and-fro by 160 millimetres or 6.3”,
with the backrest angle adjusting on request to three different
positions.
Further features included in the wide range of
standard equipment on the six-cylinder Cayenne now comprise two-zone
automatic air conditioning, cruise control, a Headlight Assistant, and
the CDR-31 audio system operated from a touchscreen.
Both the
Cayenne and the Cayenne Diesel now also come as standard on 18-inch
wheels. New driver assistance systems such as a Lane Change Assistant
and Adaptive Cruise Control are available as an option, just like the
PDLS Porsche Dynamic Light System for variable management of the
headlights in accordance with current requirements as well as the
Burmester High-End Surround Sound System with 16 channels and 1,000 Watt
maximum output.
Built to national specifications, the Cayenne
sells in Germany at a price of Euro 55,431.– including 19 per cent
value-added tax, the Cayenne Diesel comes at a price of Euro 59,596.–,
again with VAT. 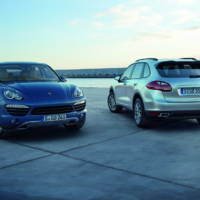 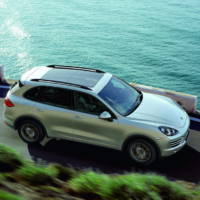 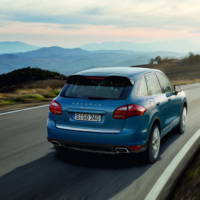 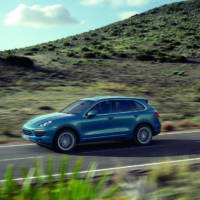 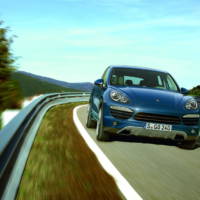 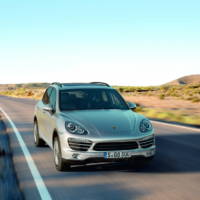 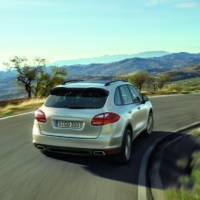 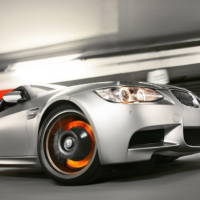 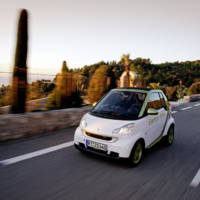