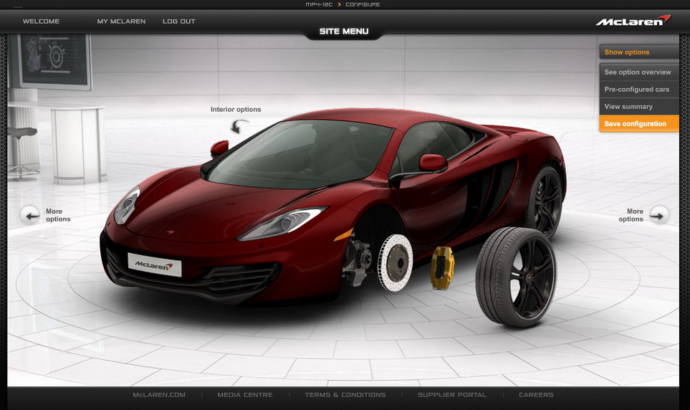 The McLaren MP4-12C Configurator was just launched so customers are able to personalize their supercar at this address www.mclarenautomotive.com/uk/p11/Configurator/default.aspx#/configurator.
The McLaren MP4-12C Configurator links to 35 dealerships in 19 countries across the world and will enable millions of combinations. Just to mention a few options, the McLaren MP4-12C Configurator offers the possibility to chose from exerior paint colour, to interior elements, with a second option to further personalise the area surrounding the driver, on board infotainment systems, performance upgrades and more.
More details regarding the McLaren MP4-12C Configurator in the official release below.
McLaren press release :
Designed around the driver’ has been the prevailing concept for the
MP4-12C. From 31 March 2010, future customers and sports car
enthusiasts alike are able to put themselves in the driving seat of
this truly innovative new high-performance sports car and specify their
ideal 12C using an interactive online car configurator at www.mclarenautomotive.com/uk/p11/Configurator/default.aspx#/configurator
Having driven 12C Experimental Prototype (XP) vehicles, and made an
appearance at the recent launch of McLaren Automotive to the world’s
media, 2009 Formula 1 World Champion Jenson Button and 2008 World
Champion Lewis Hamilton were keen to be the first to specify their
ideal 12Cs. Visitors to www.jensonandlewis.mclarenautomotive.com will see the team-mates interacting with the online configurator for the first time in a new short film.
The configurator was developed using data obtained from theMcLaren
Automotive design and engineering teams at the McLaren Technology
Centre in Woking, England.  The 12C configurator will link to McLaren
Automotive’s 35 retail outlets in 19 countries across the globe when
retailers are appointed from May 2010 and brings McLaren’s innovative
automotive technology closer to its first customers. It allows them to
enjoy specifying their preferred 12C options from a range that
literally offers millions of combinations.
A choice of 17 different high-grade exterior paint finishes begin
with Blue, Silver and White available as standard on the 12C.  A
further eight may be selected from the Special range of finishes, which
includes McLaren Orange, a solid hue which was the signature colour of
McLaren race cars in the 1960s and 1970s.  A choice of six Elite
exterior colours is available for buyers seeking the very highest
quality paint finish on their 12C.
Unique to the 12C is a ‘Driver Zone’ interior option. In addition to
combining Alcantara, leather and carbon inside the cabin for both
driver and passenger, owners are able to further personalise the area
immediately around the driver.  A choice of five leather trims can be
specified solely for the driver’s seat, door trim and dash insert and
the resulting asymmetrical appearance enhances the driver-focused
ambience of the cockpit.
Performance upgrades include a lightweight sports exhaust system,
carbon ceramic brake discs, polished-finish calipers and two different
lightweight forged wheel options. Mirror casings, engine bay panels and
engine covers are all available in carbon fibre.
In the centre of the cabin, the 12C’s portrait touch-screen gives
driver and passenger access to a bespoke on-board entertainment, media
and communication system.  The 12C features a Meridian two-channel,
four-speaker sound system, 40GB hard drive with media player, AM/FM
radio, electronic user manual and Bluetooth telephony. USB, PDMI and
audio jack ports allow media player connection, with support for Apple
iPod and Microsoft Zune.
The McLaren-developed IRIS option is available as an upgrade to the
telematics system and allows use of voice control to access a
navigation system while driving. Hard drive capacity increases to 80GB,
while users can access a picture and media viewer and email. WLAN
connectivity allows owners to remotely transfer music and other data
files from a laptop or PC when parked within range. The IRIS option
includes a seven-speaker Meridian surround sound system. 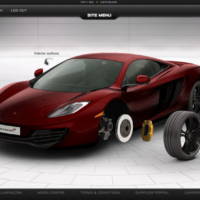 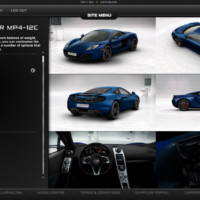 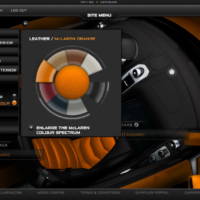 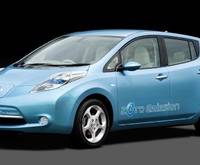 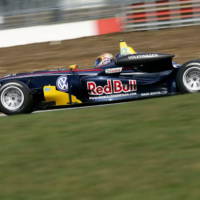