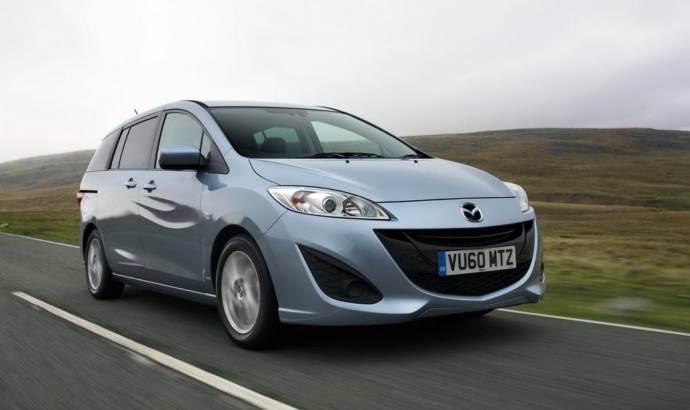 The new Mazda5 MPV is on sale at dealerships across UK starting from this month, so the automaker has just published details regarding its price.
The Mazda5 MPV is available with three equipment grades (TS, TS2 and Sport) and three powertrains options – a 150 PS 2.0-litre DISI petrol, a 115 PS 1.8-litre petrol and a 115 PS 1.6-litre turbo diesel.
All engine options come mated to a 6-speed manual transmission and the top ranging version also gets the i-stop technology.
The Mazda5 price starts at 17,695 GBP and reaches 21,495 GBP for the 2.0-litre DISI model.
The most fuel efficient is the Mazda5 1.6 which returns 54.3 mpg and has CO2 emissions of 138 grams per Km. With this engine the Mazda5 can accelerate from 0 to 62 mph in 13.7 seconds and reach a top speed of 111 mph.
For more details regarding the Mazda5 price as well as performance and consumption figures for each motorisation option, check out the official press release below.
Mazda press release :
* New Mazda5 on sale in the UK from October 2010, priced from £17,695 OTR
* Choice of three powertrains – a 2.0-litre DISI petrol (150ps) and 1.8-litre petrol (115ps) and a 1.6 -litre turbo diesel (115ps), all with six-speed manual transmissions, delivering up to 54.3mpg and 138g/km CO2 (combined cycle)
* Economy-enhancing i-stop technology standard on the flagship 2.0-litre DISI petrol model
* Outstanding seating and packaging versatility for up to seven passengers
* Sliding rear doors for easy access in even the tightest spaces
* Debut of Mazda’s flow-inspired ‘Nagare’ design theme
With its seven-seater versatility, intelligent packaging and engaging style, the New Mazda5 compact multi-activity vehicle has been engineered from the ground up to meet the demands of even the most active families.
The New Mazda5 arrives in the UK from October 2010, priced from £17,695 to £21,495 OTR, and will be available in Mazda’s familiar and generously appointed TS, TS2 and Sport trim levels. Standard equipment levels are, as you’d expect, exceptionally generous and include six airbags, Dynamic Stability Control (DSC) with Traction Control System (TCS), two ISOFIX child seat anchor points, air-conditioning, cruise control, a six-speaker CD audio unit and alloy wheels across the range.
The New Mazda5 also sees the debut of Mazda’s distinctive Nagare design language. Inspired by the flowing elements found in nature, the Mazda5 is instantly distinguished by its boldly sculpted flanks. These distinctive contours are complemented by the company’s striking face (five point grille), piercing headlamps, and a steeply raked windscreen angle resulting in a sleek and svelte silhouette that’s a world away from its more pedestrian-looking people-carrier rivals.
Getting in and out of the Mazda5 is now even easier. Its large, twin sliding rear doors – a ‘first in class’ feature unique for the Mazda5 in its sector – open to a wide 686mm and extend just 160mm beyond the bodywork when open, provide exceptional access in even the tightest spaces. Access is enhanced by a broad 130mm foot step and low 439mm step-up into the cabin. Perfect, in other words, for entering the Mazda5’s rear when carrying a child. Sport models come with power sliding doors as standard.
The Mazda5 is the last word in packaging flexibility and generous space for on-the-go families. Key to this versatility is its innovative seven-seat layout, which offers excellent packaging flexibility and generous space for all on board. The three rows of seats create a wide range of passenger-luggage combinations – from seven seats for friends and family on shorter journeys, to four seats with a generous luggage compartment for longer journeys to just two seats and a vast, flat-floored cargo area for hauling larger items.
Its seven seats can be flipped and folded to create a variety of load-carrying configurations. The 112- litre loadbay in seven-seat mode can be enlarged to 426 litres in four-seat configuration, while folding all five rear seats flat creates a vast loadbay of 857 litres (floor to belt-height) or ceiling loadbay of 1,566 litres (floor to roof). Perfect then, for flat-pack furniture fans.
The Mazda5 range debuts with the choice of three engines. The two petrol-powered MZR units – a 115ps 1.8-litre and a 150ps 2.0-litre DISI – are joined by a 115ps 1.6-litre MZ-CD turbo diesel unit. The three powertrains are all Euro Stage 5 compliant and drive the front axle through slick six-speed manual transmissions.
The flagship MZR 2.0-litre engine features DISI Direct Injection Spark Ignition and emissions-busting stop/start i-stop technologies. The system helps deliver some exceptional figures. Combined economy climbs 14.2 percent to 40.9mpg and CO2 emissions drop a full 15 percent to 159g/km over the outgoing 2.0-litre petrol engine. Performance is equally strong with a 0-62mph time of 11 seconds and a 120mph top speed.
The MZR 1.8-litre powertrain has undergone a raft of upgrades – including the introduction of new lightweight pistons and connecting rods as well as an electric control throttle valve. These upgrades result in a four percent economy boost to 39.2mpg and a six percent CO2 emissions drop to 168g/km over the outgoing 1.8-litre model. The MZR touches 62mph in 12.8 seconds and posts a 113mph maximum speed.
Featuring third-generation common-rail fuel injection, a turbocharger with and a DPF diesel particulate filter, MZ-CD 1.6-litre packs a technical punch, accelerating to 62mph in 13.7 seconds and reaching a top speed of 111mph, while returning an excellent fuel economy figure of 54.3mpg (combined cycle) and posts tax-friendly CO2 emissions of just 138g/km.
“Exciting new Nagare styling, a range of punchy and clean petrol and diesel engines and seven-seater versatility – the New Mazda5 really is the ideal car for today’s families,” says Mark Cameron, Sales Director for Mazda UK. “Its twin rear sliding doors – a real advantage for access in tight spaces – are complimented by our adaptable cabin layout that offers all the design intelligence you’d expect from a full seven-seat compact people carrier wearing a Mazda badge. And of course, this is a Mazda, so it will be an engaging and athletic drive, no matter who’s on board and what the destination.” 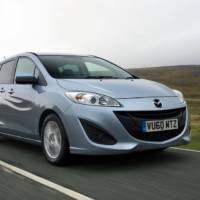 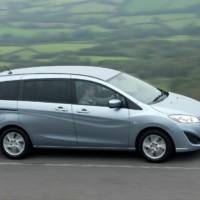 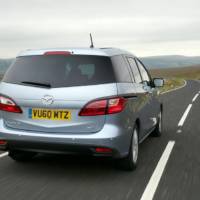 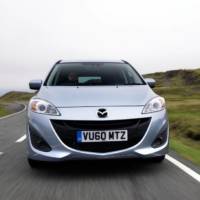 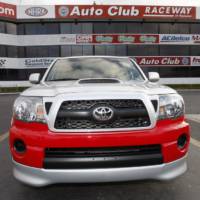 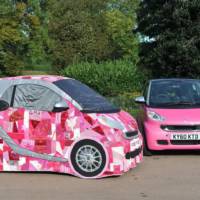