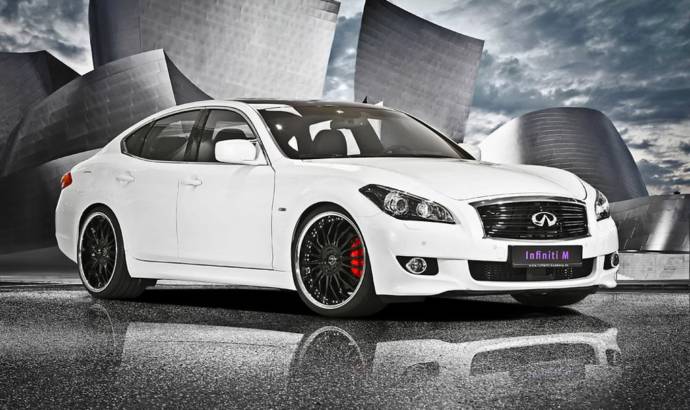 The Infiniti ‘Zentrum’ Dealer from Hamburg, Germany has developed a two different power upgrades for the Infiniti M30d S.
The Stage 1 Package enables the Infiniti M30d S to develop 280 HP (206 kW) and 610 Nm of torque through software engine tuning, plus it enhances the Japanese sedan with painted door handles, red brake calipers, a lowered suspension, a black radiator grille and a black foil covered roof.
The Stage 2 Package includes all of the above upgrades, plus 22 inch Schmidt Revolution alloys wrapped in Pirelli performance tires.
For specific pricing details regarding these two Infiniti M30d S tuning programs check the official press release below.
Infiniti Zentrum Hamburg press release :
"WINGED" INFINITI – HOW TO ENJOY THE RED BULL
The launch of Infiniti, the luxury brand of Nissan – similar, but delayed compared to the Japanese competitors Toyota with Lexus and Honda with Acura – took place in November 1989, initially only in North America with a clear strategy of participation in high-yield market for luxury vehicles. In the following years the vehicle was launched in a number of countries such as Mexico, South Korea, Taiwan, Russia and China, and in the Middle East. Since 2008, the premium models are imported to Europe.
The Hamburg car dealer “Infiniti Zentrum Hamburg” has got the latest addition to the Infiniti family, the M30d S sedan, which is named in the producer country as M Y51 – after all, already the third M-series – and is able to even better defy competition with rivals such as the Mercedes-Benz E-Class, the BMW 5 Series and Audi A6. The Hamburg Hanseatics offer two different processing packages for this purpose. The “Stage 1 Package” includes: painted door handles (600 Euro), red brake calipers with Infiniti lettering (1200 Euro), lowered suspension H + R 25 mm (1495 Euro), performance optimization of the three-liter V6 diesel engine via software to the current 206 kW (280 hp) and 610 Nm (1250 Euro), radiator grille in black (550 Euro) and a black-foil-covered roof (400 Euro).
If that’s not enough, the “Stage 2 Package” is available with a dreamlike, as for this Infiniti made rim / tire combination – Schmidt Revolution (www.felge.de), of course, from Bad Segeberg called CC-Line (one-piece) in dimensions of 10×22 inch with 265/30R22 Pirelli front tires and 11×22 inches with 295/25R22er rear tires (6800 Euro). The Schmidt-alloy rims are easy-care – the Inoxblende covers the outer rim and prevents corrosion. Thus, the wheel always looks clean and tidy – this is good enough for Infiniti M30d S!
If it spontaneously comes to the favorable viewer’s mind that the presented here M30d S is obviously wings attached, it automatically will be followed by a question of where you’ve heard this saying before… Quite right: at Red Bull!
By the way, the Infiniti Zentrum Hamburg can also offer – for those who are not necessarily supporters of the Infiniti M-series – the models FX, EX, G coupe and convertible styling individual packages on request. 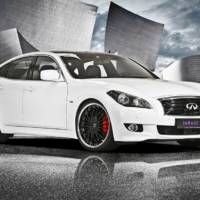 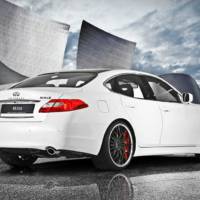 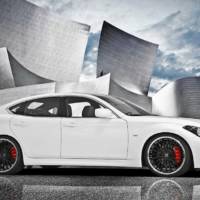 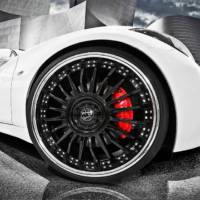 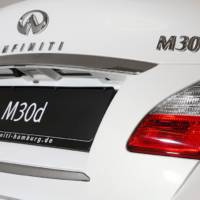 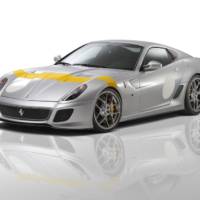 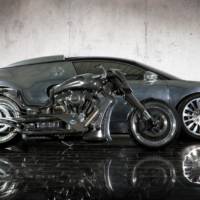