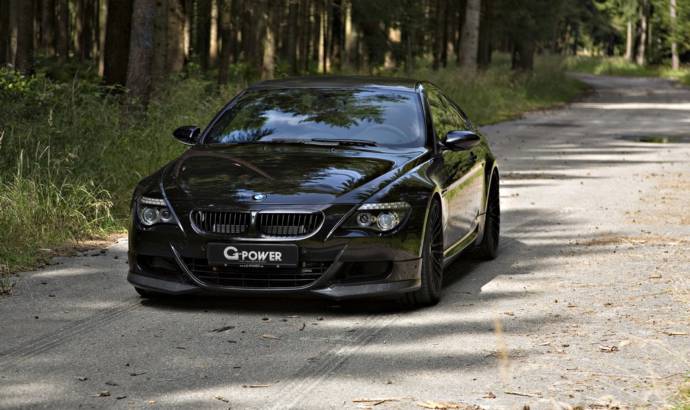 It looks like German tuner G-Power wants to turn all of their modified BMW’s into record breakers. After we’ve seen the G-POWER M5 HURRICANE RS – the world’s fastest saloon car, they are now introducing the G POWER M6 Hurricane RR BMW M6, which is the world’s fastest 4-seat Coupe.
By further perfecting their 750 hp / 551 kW SK III RS bi-supercharger system, which now features two ASA T1-316 radial superchargers, the German tuner was able to increase the output level on the G POWER M6 Hurricane RR BMW M6 to 800 HP (588 kW) between 7,500 and 8,000 rpm and 800 Nm @ 5,000 rpm.
In terms of performance these figures mean that the G POWER M6 Hurricane RR BMW M6 can reach 100 Km/h from a stand still in less than 4.35 seconds, also able to accelerate from 0 to 200 Km/h in 9.5 seconds and from 0 to 300 Km/h in 24.9 seconds.
Besides the heavily modified V10 engine, the G POWER M6 Hurricane RR BMW M6 comes with improvements in terms of aerodynamics, after receiving carbon fiber spoilers (front and rear), a set of 20 inch alloys wrapped in 255/35 ZR 20
and 285/30 ZR 20 tires and a new coilover suspension with compression and height adjustability.
Various interior changes have also been performed and fore more specific details regarding the G POWER M6 Hurricane RR BMW M6 check out the official release below the jump.
G-Power press release :
After the G-POWER M5 HURRICANE RS with bi-supercharger engine and 750 hp / 551 kW broke the record for the “world’s fastest saloon car” at the end of 2008 with a speed of 367.4 km/h, G-POWER went one step further in 2010, taking the existing record to a new all-time best of 372 km/h with the next evolution of the same car – the M5 HURRICANE RR.
The 800 hp 588 kW V10 bi-supercharger engine familiar from the G-POWER M5 HURRICANE RR is now also available in BMW’s full-size coupé, making the G-POWER M6 HURRICANE RR the world’s fastest 4-seat Coupé.
The necessary power increase comes courtesy of a further developed version of the 750 hp / 551 kW SK III RS bi-supercharger system, with the 800 hp evolution featuring two ASA T1-316 radial supercharger. The charge air, which is pre-compressed inside the two superchargers, is cooled to performance-enhancing temperatures by the dual-flow, water-cooled charge air cooler system finished in G-POWER’s characteristic orange. This complex aluminium casting replaces the standard-production airbox on top of the engine and, because of its short intake channels, facilitates the same spontaneous throttle response as the series production engine, combined, however, with a substantial increase in torque.
The inside of the ten-cylinder four-valve engine has been optimised by lightweight, precisely balanced Mahle high-performance forged pistons with lower compression and increased stiffness. Dedicated components are also required in place of the series-production con rods and piston pins, which are not specified to handle the significant increase in forces. Modified mapping for the engine electronics also contributes to the higher peak output of 800 hp / 588 kW at between 7,500 and 8,000 rpm. The maximum torque of 800 Nm is generated at 5,000 rpm.
Of course, the outstanding performance figures delivered by the G-POWER M6 HURRICANE RR are not limited to top speed alone. With less than 4.35 seconds from 0–100 km/h, the almost two-tonne coupé sets a standard that is just as impressive as the 9.5 seconds it takes to 200 km/h and the 24,9 seconds to the 300 mark.
Alongside the most powerful BMW engine ever to power a road-legal BMW M6, aerodynamics also played a fundamental role. Thus, the HURRICANE RR has been equipped with a G-POWER carbon-fibre front skirt and a rear spoiler for greater aerodynamic downforce at high speed.
The G-POWER M6 HURRICANE RR maintains its contact to the road with 20-inch G-POWER SILVERSTONE CLUBSPORT forged wheels clad in 255/35 ZR 20 and 285/30 ZR 20 rubber. Optimisation for performance was, of course, a priority in this department, too. Consequently, the all-new SILVERSTONE CLUBSPORT forged alloy wheels, measuring 9.0 x 20 inches and 10.5 x 20 inches, are no heavier than the series-production wheels, despite their far greater dimensions.
Further contributors to the high-speed capability of the M6 HURRICANE RR are the G-POWER high-performance braking system and the G-POWER RS coil-over sports suspension, with 9-way adjustability for compression and rebound plus infinitely variable height adjustment.
The exclusive nature of this automobile is clearly indicated by a tachometer that measures up to 400 km/h, visible carbon-fibre panelling for the dashboard, centre console and door trim, as well as the ergonomically shaped G-POWER sports steering wheel upholstered in perforated and highly tactile Kjerba Nappa leather.
The G-POWER M6 HURRICANE RR is available for order as a complete vehicle from G-POWER in Autenzell, Germany. The same G-POWER engine technology is also available in a 750 hp version for the current BMW M5 and M6. The G-POWER SK III RS bi-supercharger engine conversion with 750 hp / 551 kW is offered at a price of EUR 56,000 (net plus assembly). 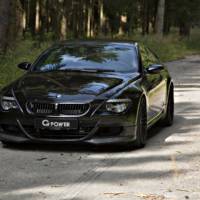 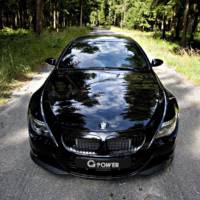 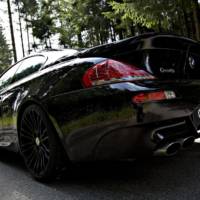 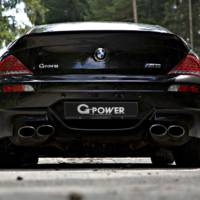 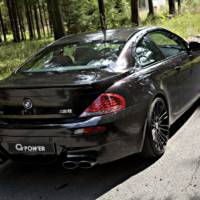 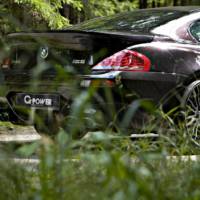 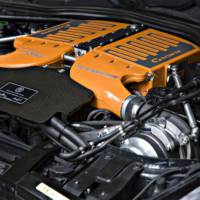 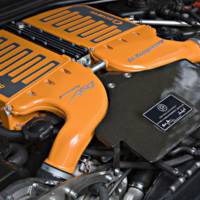 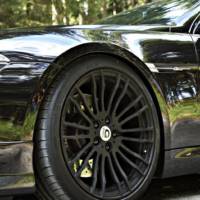 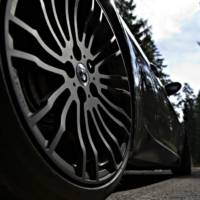 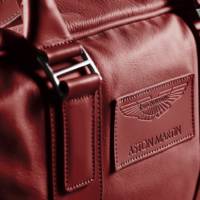 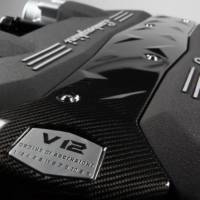