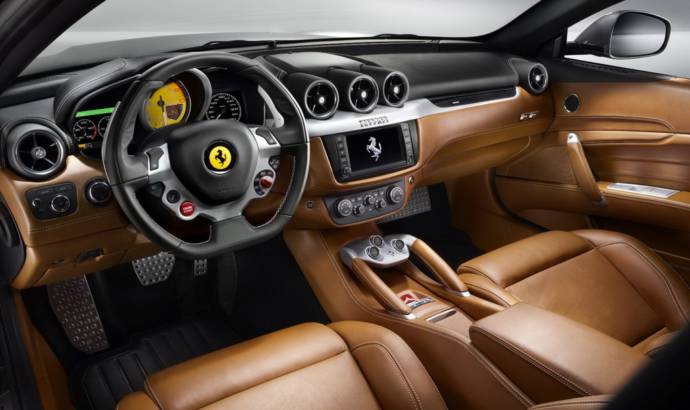 As the first four-wheel-drive to ever come out of Maranello, the Ferrari FF is being showcased these days in Geneva, the Italian automaker decided to release a series of photos with its interior, in under to further underline that it managed to combine extreme sports car performance with versatility.
The Ferrari FF is powered by a GDI V12 which sends 660 HP and 683 Nm of torque to all 4 wheels via a 7-speed F1 dual clutch transmission, and besides being able to sprint from nought to 100 Km/h in 3.7 seconds and reach a top speed of 335 Km/h, the car is also very efficient for its class, as it needs 15.4 litres pf fuel per 100 Km and has CO2 emissions 360 grams per Km.
At the interior the Ferrari FF features body-hugging seats, a choice of six exclusive colours, a new rear seat infotainment system with two screens, a 1,280 Watt 16-channel sound system and a 450 litre boot, which can be extended to 800 litres with the rear seats folded.
Ferrari press release :
ANOTHER RECORD FOR THE MULTI-AWARD-WINNING 458 ITALIA: BEST-IN-CLASS EMISSIONS OF JUST 275 G/KM
Geneva, March 1st 2011 – The 81st Geneva International Motor Show will play host to the unveiling of two major new Prancing Horse innovations: the revolutionary FF, a four-wheel drive four-seater with a mid-front V12 that is the most powerful and versatile car Ferrari has ever built, and the 458 Italia sporting the HELE (High Emotions Low Emissions) System which cuts CO2 to just 275 g/km.
This new emissions figure represents a reduction of 15 per cent and is another remarkable achievement for the 458 Italia which has already received over 20 awards from the world’s most prestigious car magazines. The 458 Italia now boasts the lowest emissions of any sports car in its class on the market.
The FF also makes its eagerly-waited debut at Geneva after the huge build-up of expectation and interest created by the client premiere at Maranello broadcast online by www.ferrari.com.
The revolutionary FF offers a completely new take on the sporting Grand Tourer theme. It is not only the first Ferrari with four-wheel drive, but, more significantly, a model that hails a major break with the past, effortlessly melding extreme sports car performance with the versatility and usability of a genuine GT and boasting an extremely innovative design.
Every single area of the FF brims with innovation, not least its engine, the first GDI V12 to be coupled with the seven-speed F1 dual-clutch gearbox. The V12 unleashes a massive 660 CV at 8,000 rpm, and maximum torque of 683 Nm at 6,000 rpm with 500 Nm already available at just 1,000 rpm. This ensures the performance figures of an extreme sports car, with the 0-100 km/h sprint covered in 3.7 seconds and a top speed of 335 km/h. Efficiency has been significantly boosted too, with fuel consumption now standing at just 15.4 litres per 100 km, and CO2 emissions at 360 g/km, a 25 per cent reduction compared to the previous V12s, thanks in part to the HELE (High Emotions-Low Emissions) System which incorporates Stop&Start technology.
Uniquely, the FF also guarantees this exceptional performance on terrain with very low grip coefficients, thanks to Ferrari’s own patented 4RM four-wheel drive system. Torque is still delivered by the rear wheels, but the PTU (Power Transfer Unit) ensures that as much as is required is also transferred to the front wheels when necessary on low grip surfaces. The FF intelligently distributes torque to each of the four wheels individually, thanks to the fact that all of the dynamic vehicle controls (E-Diff, F1-Trac and PTU) have been integrated into a single CPU.
Exceptional sporty driving is guaranteed by the FF’s transaxle architecture (mid-front engine with gearbox over the rear axle) and the positioning of 53% of weight to the rear of the car. Meticulous attention has been taken in lightening the engine (new castings), bodyshell (new aluminium alloys and production processes) and a host of other components. The interior has also been optimised through the use of high-tech materials such as magnesium for the seats. Third generation Brembo carbon-ceramic brakes are now lighter and longer-lasting, with virtually negligible wear during normal use on the road. All of these innovations have combined to produce an absolutely exceptional weight-power ratio of 2.7 kg/CV, a new benchmark for this kind of car.
Styled by Pininfarina, the FF’s lines effortlessly reflect its signature uncompromising balance of sportiness and versatility. It can comfortably accommodate four in its body-hugging seats and spacious cabin. Its 450 litre boot can also be extended to 800 litres as the rear seats fold down independently. This means that the FF offers more luggage space not only than any other car in its category, but also many four-door saloons, too.
Everything aboard the FF is tailored specifically to the needs and tastes of its driver with a choice of six exclusive colours and the finest Frau aniline leathers specially treated to enhance their natural softness. The FF’s exceptional specification enhances in-car enjoyment for all four occupants. Features include a new rear-seat infotainment system with two screens for watching TV and DVD and a 1,280 Watt, 16-channel stereo system with Dolby Surround Sound.
The three FFs on the stand are joined by a 458 Italia, the 599 GTB Fiorano with the sporting HGTE package, and a Ferrari California in an elegant Blu Tour De France finish. The Ferrari California is enjoying incredible sales success and is also the model subject to the widest range of personalisation requests in Ferrari’s line-up. The V8-engined convertible is, in fact, very popular in the special two-tone and three-layer paint option finishes, with additional original interior combinations of materials, colours and trim solutions. The extraordinary success of the Ferrari California testifies to its enduring and sophisticated appeal 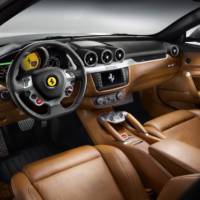 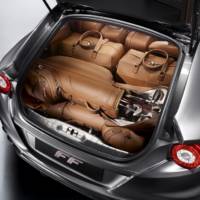 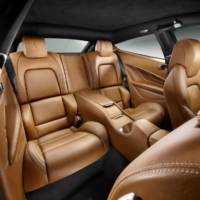 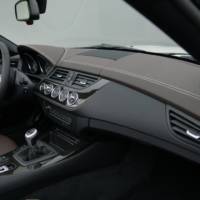 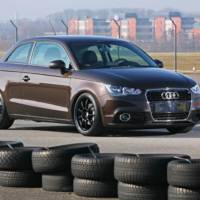