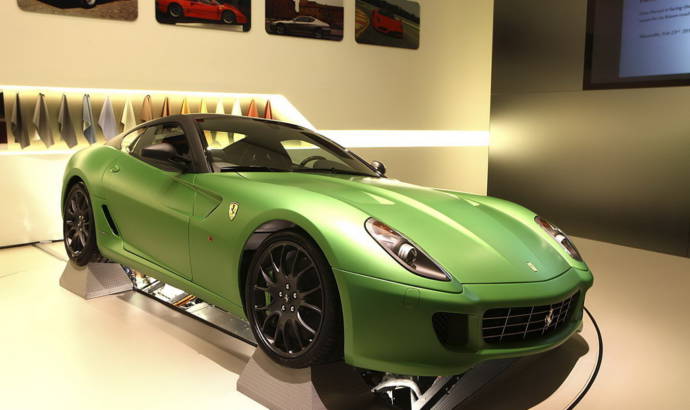 The Prancing Horse has officially unveiled the Ferrari 599 GTB Fiorano HY-KERS in Geneva today.
The Ferrari 599 GTB Fiorano HY-KERS is an experimental vehicle that features an advanced hybrid transmission and represents the Italian manufacturer’s intention of implementing hybrid solutions on sports cars without compromising performance and handling.
The Ferrari 599 GTB Fiorano HY-KERS features a tri-phase, high-voltage electric
motor that weights 40 Kg and is coupled to the rear fo the dual-clutch 7-speed
F1 transmission. With to this electric motor that generates an additional 100 horsepower the Ferrari 599 GTB Fiorano HY-KERS compensates for the extra weight that the car has gained, while fuel consumption and CO2 emissions are greatly improved.
Also the Ferrari 599 GTB Fiorano HY-KERS uses its electric motor to recharge its batteries when the car is under braking.
Ferrari press release :
Geneva, 2 March 2010. Ferrari presents a vettura laboratorio
(experimental vehicle) at the 80th edition of the Geneva Motor Show
based on the 599 GTB Fiorano equipped with an advanced new hybrid
transmission.
Hybrid technology is one of the solutions examined by Ferrari in its
on-going research and development into making its production cars ever
more efficient. Experimenting with alternative technologies represents
the company’s long-term strategy after the announcement in 2007 of a
five-year plan to reduce fuel consumption and emissions across the
range. With the launch of the Ferrari California (2008) and the 458
Italia (2009), in fact, Ferrari’s average fuel consumption and CO2 emissions figures have already been reduced by around 30 per cent compared to 2007.
The HY-KERS displayed at the Geneva Motor Show is an example of how
Ferrari is studying the application of hybrid technology to
high-performance sports cars. Central to Ferrari’s objectives is
maintaining the balance, handling and performance characteristics
typical of its cars despite the inevitable disadvantages in terms of
weight represented by applying hybrid solutions to existing models.
To this end Ferrari has employed its racing experience to adapt a
lightweight hybrid drivetrain to the 599 GTB Fiorano with the aim of
ensuring that vehicle dynamics are unaffected. This was achieved by the
careful integration of all system components, positioning them below
the centre of gravity and ensuring that interior and luggage space are
entirely unaffected. Similarly the flat lithium-ion batteries are
positioned below the floorpan of the car inside the aerodynamic
underbody. The result is a centre of gravity that is even lower than in
the standard car. In addition, a part of the weight gained by fitting
the electric motor, generator and the batteries is offset by being able
to do away with the traditional starter motor and battery.
Ferrari has also applied its F1 technology to the design,
engineering and construction of a new kind of electric motor which also
helps optimise the longitudinal and lateral dynamics of the car,
enhancing traction and brake balance. The motor cuts in during
acceleration, providing instantaneous torque when moving away from a
standstill and during overtaking manoeuvres, with torque control a
function of grip, gear and accelerator pedal angle. Depending on
vehicle speed and engine load – for example in town driving – the
hybrid system can also function as a full-electric drivetrain. The
result is a direct reduction in consumption and emissions. The motor
also features a unique cooling and lubrication system for maximum
efficiency under all operating temperatures and loads. The castings of
the motor are made in the Ferrari foundry, complete with Prancing Horse
motif.
Weighing about 40 kg, the compact, tri-phase, high-voltage electric
motor of the HY-KERS is coupled to the rear of the dual-clutch 7-speed
F1 transmission. It operates through one of the transmission’s two
clutches and engages one of the two gearbox primary shafts. Thus power
is coupled seamlessly and instantaneously between the electric motor
and the V12. The electric motor produces more than 100 hp as Ferrari’s
goal was to offset every kilogram increase in weight by a gain of at
least one hp.
Under braking the electric drive unit acts as a generator, using the
kinetic energy from the negative torque generated to recharge the
batteries. This phase is controlled by a dedicated electronics module
which was developed applying experience gained in F1 and, as well as
managing the power supply and recharging the batteries, the module also
powers the engine’s ancillaries (power steering, power-assisted brakes,
air conditioning, on-board systems) via a generator mounted on the V12
engine when running 100 per cent under electric drive. It also
incorporates the hybrid system’s cooling pump.
In keeping with Ferrari’s 360-degree approach to efficiency and its
commitment to environmental sustainability, new technologies for its
road cars are matched by the considerable investments already made to
reduce the environmental impact of the company’s production activities
in Maranello.
After the inauguration of the photovoltaic installation on the roof
of the Mechanical Machining facility in January 2009, which reduced the
factory’s power requirements by over 210,000 kWh annually, 2009 also
saw the opening of the trigeneration plant (the simultaneous production
of power, heat and cooling from a single source) – the first of its
kind to be implemented by a sports car manufacturer. This enabled
Ferrari to reduce CO2 emissions by 15 per cent, with the
goal of reaching a reduction of over 40 per cent by the end of 2010.
Thanks to these ecological solutions, Ferrari is completely autonomous
for its energy requirements. 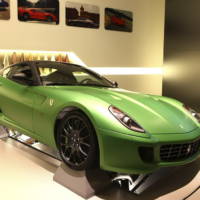 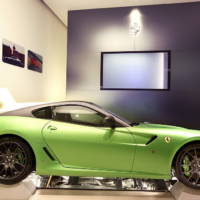 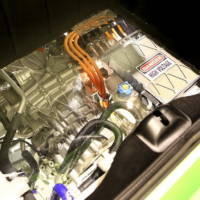 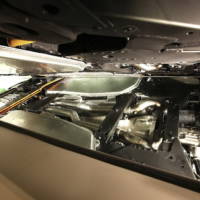 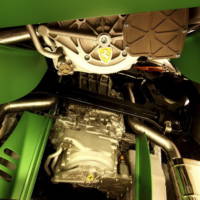 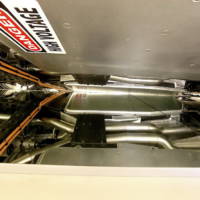 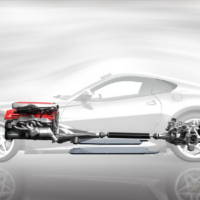 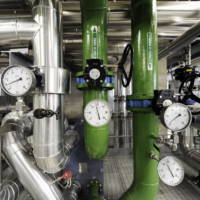 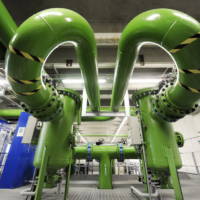 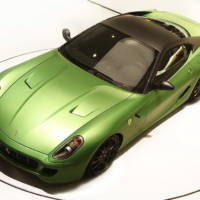 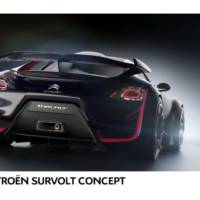 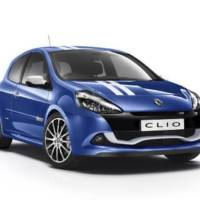