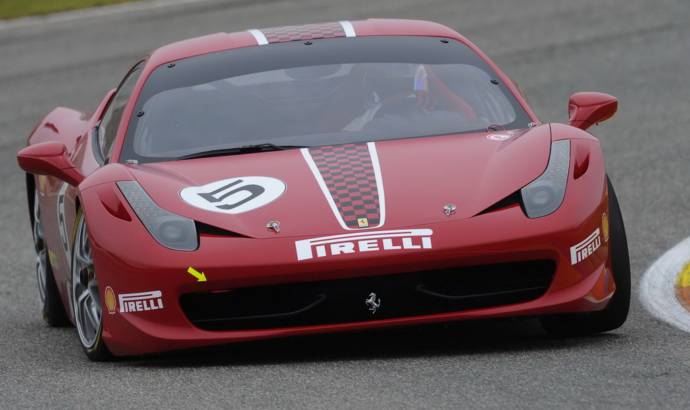 The Ferrari 458 Challenge has debuted today at the 35th edition Bologna Motor Show, and this lighter, and faster version of the 458 Italia will start participating in one-make racing event starting from 2011.
The Ferrari 458 Challenge uses the same 4.5-litre V8 as the road going model, which means it outputs 570 HP @ 9,000 rpm, but features improved gear ratios thanks to its dual-clutch F1 gearbox that guarantees higher torque at lower revs, and an E-Diff electronic differential which is a first for Ferrari track-only cars.
The Ferrari 458 Challenge makes use of lighter materials like carbon fiber and Lexan, and features a race specific suspension with stiffer springs and single-rate dampers.
Also the ride height gas been lowered by 30 mm, and the car’s larger Pirelli slick tyres are wrapped around 19 inch forged rims. The Ferrari 458 Challenge comes with Brembo CCM2 brakes like the ones on the 599XX and for more details you can check the official press release below the jump.
Ferrari press release :
Maranello, 2nd December 2010 – Ferrari makes a different contribution to the 35th edition of the Bologna Motor Show with a stand devoted entirely to its racing activities plus an intense track programme.
The 458 Challenge also makes its world debut at the Bolognese event. This mid-rear V8 berlinetta is derived from the 458 Italia and is the fifth model used by Ferrari in its single-series racing programme. The latter is currently split into Italian, European and North American championships which will be flanked next year by the new Asia-Pacific series. With the new 458 Challenge, Ferrari puts an exceptional combination of extreme performance, superb fun behind the wheel and unique driving emotions at the finger-tips of its sporting, professional and gentleman-driver clients.
Also on the stand is the F430 GTC owned by the AF Corse team, one of the cars with which the Maranello marque won the Constructors’ title in the GT2 class of the Intercontinental Le Mans Cup 2010.
The Prancing Horse’s line-up of track models is completed by the FXX and 599XX laboratory cars, each of which has its own eponymous research and development programme involving in-depth collaboration between Ferrari technicians and our client test-drivers. At the very centre of the stand is the F60, the single-seater the Scuderia Ferrari Marlboro fielded in the 2009 Formula 1 World Championship season.
A rich and varied programme is planned for the competition arena in Area 48 with the classic end-of-year battle between the drivers of the Ferrari Challenge Trofeo Pirelli, now in its 18th season, dominating the action. No less than 16 cars from the Italian and European series will be taking each other on in a three-round competition on Wednesday, December 8th. However, the high point of the programme will be the Formula 1 exhibition with which Luca Badoer will bring his extraordinary 13-year career as the Scuderia Ferrari’s official test-driver to an end. He’ll put an F60 through its paces and a simulated pit-stop, as a farewell homage to the tifosi and enthusiasts present.
458 CHALLENGE
Compared to the 458 Italia, the direct injection 4499 cc V8 remains strictly in production tune, with an output of 570 hp at 9,000 rpm. That said, modifications have been made to the gear ratios and calibration of its dual-clutch F1 gearbox to guarantee higher torque at lower revs. The 458 Challenge is also equipped with the E-Diff electronic differential already employed on the road-going version, a first for Ferrari’s track-only cars.
Significant work has also gone into cutting the car’s weight. This focused on both the exterior and interior with Ferrari’s engineers concentrating in particular on reducing the thickness of the bodyshell panels and on using lightweight materials, such as carbon-fibre and Lexan.
The new 458 Challenge also has a specific suspension set-up with steel uniball joints, stiffer springs, single-rate alloy dampers, centre-nut 19” forged rims, larger dimension Pirelli slicks and a ride height lowered by 50mm all round. It is also equipped with the new generation Brembo CCM2 brakes integrated with the latest ABS system which debuted on the 599XX, Ferrari’s extreme experimental laboratory car.
Another first for a Ferrari Challenge model is the adoption of the F1-Trac traction control system, the most sophisticated of its kind. Developed in-house by Ferrari, the F1-Trac system constantly monitors levels of grip for maximum high-performance road-holding. Two specific track-biased calibrations have been developed for this application, with control logics and strategies derived from Ferrari’s extensive racing experience in the F1 and GT championships. The F1-Trac is completely integrated with the E-Diff to guarantee maximum stability and acceleration both into and out of corners.
The ABS/EBD, F1-Trac and E-Diff calibration settings are selected via the manettino on the steering wheel, the first time this solution has been adopted on a model developed for the Ferrari Challenge series. The driver has a choice of three configurations: OFF position (traction control deactivated), position 1 and position 2. The latter two settings have progressively higher levels of control system intervention and are selected in accordance with grip conditions on the track.
In the course of the intensive development sessions involved in honing the 458 Challenge for the track, the engineers also managed to improve the car’s lap time at Fiorano by two seconds over that of its predecessor, resulting in a new record of just 1’16.5”. Equally impressive is the amount of lateral grip the new car generates – up to 1.6G. 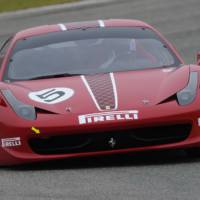 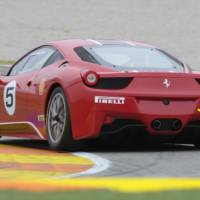 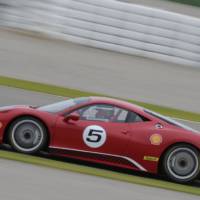 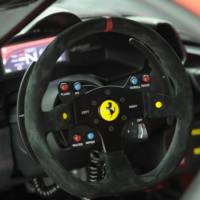 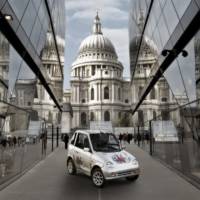 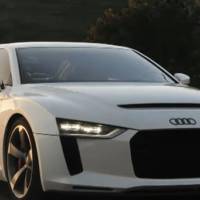