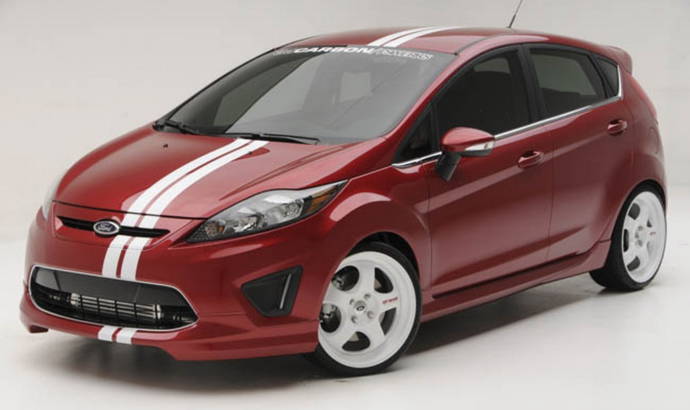 Besides debuting the MY2011 Fiesta the North American automaker has also brought four customized Ford Fiestas at the LA Auto Show witch are meant to spark imagination among people.
These customized Fiestas on display are also showing Ford’s Custom Accessories, witch include a rear roof spoiler, body-side graphics plus a 3dCarbon body kit and all these components can be fitted on the car right at the dealership.
So to get to the point, the Four customized Fiestas at the 2009 LA Auto Show are the 2011 Ford Fiesta by Ford Racing and Steeda Autosports, the 2011 Ford Fiesta by H&R Special Springs, the 2011 Ford Fiesta by Ford Custom Accessories and the 2011 Ford Fiesta by 3dCarbon and FSWerks. Each of these four custom Fiestas are either performance oriented or set on offering exclusivity and the company wants to prove that just about anything is possible.
Ford press release :
LOS ANGELES, Dec. 2, 2009 – As the 2011 Ford Fiesta basks in the afterglow of its North American debut at the Los Angeles International Auto Show, Ford today unveils four tricked-out versions of the company’s first global car designed to whet the appetites of customization enthusiasts.
“We expect the Fiesta will be wildly popular among people who like to personalize their vehicles because of its affordability, great driving dynamics and award-winning design,” said Ford Designer Melvin Betancourt. “We’ll offer these customers a variety of appearance and performance accessories to choose from so they really can make their Fiesta their own.”
Betancourt says the goal of showcasing four customized Fiestas at the Los Angeles Auto Show is simple: to spark imagination.
“The Fiesta provides a great canvas for the customer who wants to create a vehicle that expresses his or her personality,” he said. “The possibilities are endless.”
Fiesta showcases Ford Custom Accessories
The customized Fiesta models on display in Los Angeles feature a variety of Ford Custom Accessories, such as an upper rear hatch spoiler, body-side tattoo graphics and a 3dCarbon body kit.
“We want to make it as fun and as easy as possible for people to customize their Fiesta,” said Richard Anderson, Fiesta Accessories manager, Ford Vehicle Personalization. “Since all of the accessories are installed at the dealership, customers can literally drive away with the vehicle of their dreams.”
The reveal of four Fiesta tuner cars at the Los Angeles Auto Show marks the first time that Ford is presenting customized cars in conjunction with a new model launch – a move Anderson says is perfect for the new Fiesta.
“What makes the Fiesta special is that it captures the essence of European driving,” said Anderson. “It’s a cool car that delivers from both an appearance perspective as well as a vehicle dynamics perspective.”
For performance-minded enthusiasts, Ford also will offer a selection of accessories from Ford Racing Performance Parts, including a performance-tuned suspension package, a performance exhaust and 17-inch Ford Racing wheels.
Ford Racing teamed up with Steeda Autosports to create a custom Fiesta that would perform as well on the track as it does on the street.
“Benefiting from its European heritage of superior driving dynamics, Fiesta is the perfect platform for taking it to the next level with performance upgrades, allowing the enthusiast to personalize it with content that complements all the cool appearance items that will be available,” said Mickey Matus, Ford Racing marketing manager.
Also on display at the show is a Fiesta customized by H&R Special Springs, an aftermarket supplier of suspension parts. It features a lowered suspension that gives the vehicle more of a tuner stance, custom OZ wheels, Pirelli tires and free-flowing body graphics.
Roland Graef, who runs U.S. operations for H&R, says Fiesta is a welcome addition to what he describes as an “oversized” U.S. car market.
“Cars today have gotten way too big,” he said. “The new Fiesta will fill an important niche for people who are waiting for an affordable, small car to customize.”
A variety of options for customization enthusiasts
According to Sam De La Garza, Fiesta marketing manager, the four tricked-out Fiesta models demonstrate that just about anything is possible with imagination.
“The Fiesta is Ford’s first global car, and it’s ideally suited for modifications,” he said. “The message is that it is okay to dream with the Fiesta because anything is achievable.”
De La Garza says people can build and price their own personalized Fiesta by visiting www.fordvehicles.com/2011fiesta.
“Between now and the time Fiesta goes on sale next year, we will continue to update the site to include more exciting accessories,” he said. “Stay tuned.”
More than 80,000 people have expressed an interest in buying the new Fiesta months before the vehicle lands in dealerships thanks to the tremendous buzz created by the Fiesta Movement, a social media initiative that has 100 young trendsetters test driving and living with a European-spec Fiesta for six months and reporting their experiences online through a variety of social media sites.
Throughout the Fiesta Movement, agents have traveled more than 1.4 million miles and have generated more than 6 million YouTube views, nearly 740,000 Flickr views and more than 3.7 million Twitter impressions.
The customized Fiestas on display at the Los Angeles Auto Show include:

2011 Ford Fiesta by Ford Racing and Steeda Autosports
There’s nothing like a solid performance team to get results. Ford Racing teamed up with Steeda Autosports to transform this 2011 Ford Fiesta. Steeda’s cold air intake improves airflow, while the Borla/Ford Racing Performance cat-back system keeps the 1.6-liter Ti-VCT (Twin Independent Variable Camshaft Timing) I-4 breathing easy. To keep it all firmly planted, Steeda/Ford Racing upgraded the factory suspension to give the customer track-inspired ride and handling. Behind the Ford Racing multi-spoke Euro wheels lurk one-off Brembo front and rear brakes that keep the driver in full control.

2011 Ford Fiesta by H&R Special Springs
Experts at dialing in the perfect ride height for every application, H&R Special Springs puts its own brand of “Special” into this 2011 Fiesta five-door. Fiesta’s natural good looks get the Euro treatment, with Sticky Jewell custom graphics, custom Euro hood vents, stealthy blacked-out headlamps and a Ford Custom Accessories upper rear hatch spoiler. The H&R Street Performance monotube coil-over kit features height-adjustable shocks to set wheel arches the perfect distance from the big, 18-inch OZ SuperTurismo GT wheels. When it comes to personalizing Fiesta, this is one suspension-and-wheels approach that most do-it-yourself buyers can adopt to set themselves firmly above the rest of the sport compact crowd.

2011 Ford Fiesta by Ford Custom Accessories
Here’s one show car that’s set to become available to anyone with the creativity and desire to personalize their own 2011 Ford Fiesta. When the car rolls into showrooms in 2010, nearly every styling component displayed on this white-hot Fiesta will be available from Ford Custom Accessories, Ford Licensed Accessories and Ford Racing Performance Parts. Put together a ride that’s as unique as you and the crowd you run with. When you meet up, they’ll see you coming in your personalized Fiesta.

2011 Ford Fiesta by 3dCarbon and FSWerks
Making a bold styling statement is just half the fun of building a sport compact. That’s why the 3dCarbon/FSWerks 2011 Fiesta uses the built-in energy of Ford’s European styling and the rock-solid foundation of its powertrain to springboard to the next level of street authority. The combination of the FSWerks Stage 2 intercooled turbo kit and free-breathing 2.25-inch exhaust provides capability to match the zoomy looks of the 3dCarbon body kit. Out on the road, the aggressive front air dam, aerodynamic side skirts and rear lower accent trim issue a bold challenge to contenders. At the track, FSWerks components readily back it all up when the talk stops and the pedal goes 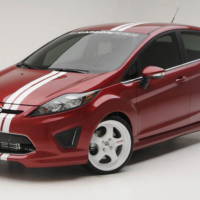 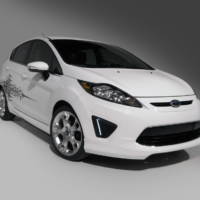 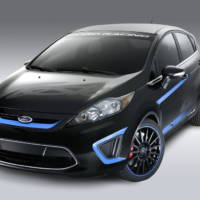 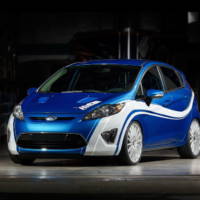 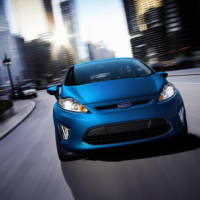 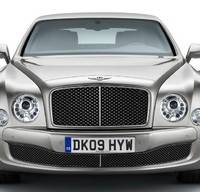