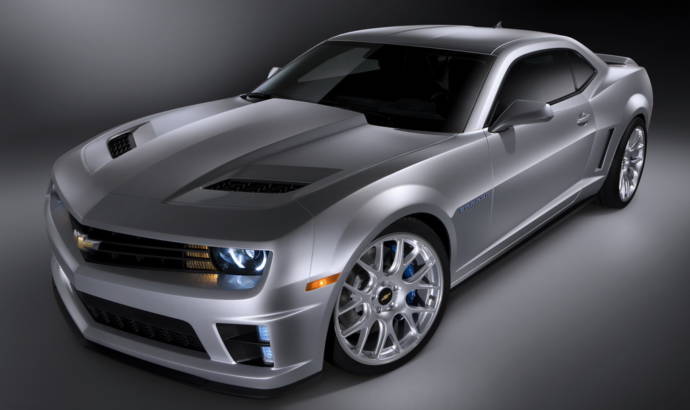 Five Chevrolet Camaro Red-Hot Sports Coupe Concepts are showcased at the SEMA Convention this year, each reflecting a different vision of style, and performance.
The first is the Jay Leno Camaro that has a twin-turbocharged 3.6-litre direct injected V6 for witch power has been boosted to around 425 HP.
The second is the Camaro Synergy that presents a new limited-edition body colour for spring along with a few production accessories.
The third is the Camaro Chroma witch is an SS-based project presenting a carefully selected list of accessories as well as a other modification that offer a visual impact.
The fourth is named the Camaro Dusk, inspired by the style of young, urban professionals, featuring an aggressive look with a lowered suspension, custom 21 inch wheels and a custom ground effects package.
The fifth is the Camaro Graphics witch offers a long list of proposals for accessory graphics packages, with the intend of receiving feedback from Camaro enthusiasts for possible production.
GM press release :
LAS VEGAS – Chevrolet unveiled five dramatic Camaro concepts at the annual automotive aftermarket extravaganza known as the SEMA Convention, each representing a different vision of style, personalization and performance.
The Camaro concept vehicles include:

“During the annual SEMA Convention, the popularity of a new car can be easily judged by the number of ‘tuner’ versions used by various companies to showcase their latest products; and the Camaro is our runaway hit this year, with countless examples displaying everything from mild styling accessories to wild performance modifications,” said Brent Dewar, vice president, Global Chevrolet Brand. “We’re thrilled by all the creative ideas, but especially proud of the cars we developed in-house. They represent modern interpretations of the Camaro that could easily be created by owners using the accessories offered by Chevrolet.”
Many of the Camaro accessories can be ordered through Chevy dealers for installation at the time of the vehicle’s purchase. This allows customers to personalize their cars to their exact wishes, with installation handled by the dealer and the cost rolled into the monthly payments.
In addition to the Camaro contingent, Chevrolet is also showing the Silverado ZR2  concept and an accessorized Corvette Grand Sport at SEMA. Here’s a closer look at each of the concepts:
The Jay Leno Camaro
Powered by a twin-turbocharged version of the 3.6L direct injected V-6 that is standard in Camaro LS and LT models, Leno’s Camaro blends high performance with surprising efficiency in a racing-ready package. A pair of Turbonetics T-3 turbochargers blows through a custom air-to-air intercooler, force-feeding the engine about seven pounds of boost and lifting its horsepower level to about 425. That’s about 40 percent greater than stock and in normal driving (when the turbochargers aren’t making boost), there’s virtually no penalty in fuel economy over the non-turbocharged 3.6L engine.
“Jay’s Camaro offers style, performance and efficiency in a big way,” said Dewar. “It delivers the power of a Camaro SS on demand, but with the fuel economy of a V-6.”
Supporting upgrades for the turbo system include a larger-capacity Be-Kool radiator and a custom exhaust system, as well as a Centerforce-supplied clutch and pressure plate for the six-speed manual transmission. The tubing for the turbo system is powder-coated blue. The powertrain was designed to deliver consistent, controllable power for both the street and race track. In fact, road racing was a primary mission for the car during its development.
Additional vehicle also support its racing intent:

The exterior styling of Leno’s car is the most radical of all the Camaro concepts at SEMA. The front fascia and hood are one-off creations, as are the unique upper and lower grilles and the ground effects package (including a rear diffuser). The heritage-inspired vent styling in front of the rear wheels has been replaced with functional brake cooling ducts.
Camaro Synergy
The Camaro Synergy concept previews a new Synergy Green production exterior color that will be offered on a special-edition Camaro in the first half of 2010. It also features a host of the latest Camaro accessories offered through Chevy dealers. They dramatically enhance the performance appearance of the car, demonstrating the personalization possibilities open to Camaro owners. Designers took liberties with the accessories, creating a totally unique package. Details include:

The ground effects include pronounced rocker moldings, a rear diffuser-type styling piece and a front spoiler. They, along with the rear wing spoiler and rally stripes, are finished in the production Cyber Grey color, although the ground effects and spoiler can be painted to match the exterior of the car. The Rally stripes are adhesive-backed and are offered in grey, black or white. They’re part of a broader range of heritage-inspired graphics that also include “hockey stick” stripes for the front fenders.
Chevy designers further enhanced the concept with a Pedders coil-over lowering kit and a set of large, Brembo brakes, as well as color-coordinating the Jet Black interior with Synergy Green accent stitching, piping and other accents. The lowering kit, brakes and interior accents are not among the accessories offered for the Camaro, but represent common and popular aftermarket upgrades. Chevrolet will gauge public interest in the features for possible inclusion in future accessory offerings.
Camaro Chroma
It looks like the custom creation of a tuner shop, but the Camaro Chroma simply demonstrates how carefully selected accessories available through Chevy dealers can create a look like nothing else. The Camaro Chroma is based on an SS/RS model in Summit White and uses a combination of current and not-yet-released components, including:

The Grand Sport accessories are expected to go on sale in early 2010. They’re available through any Chevrolet or other authorized GM dealer. 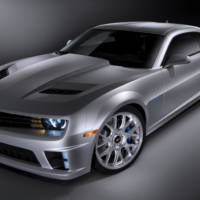 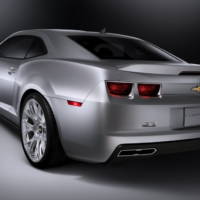 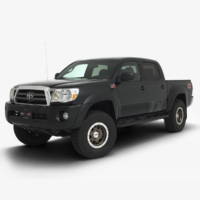 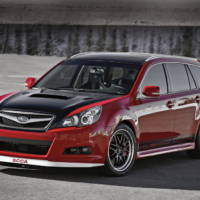