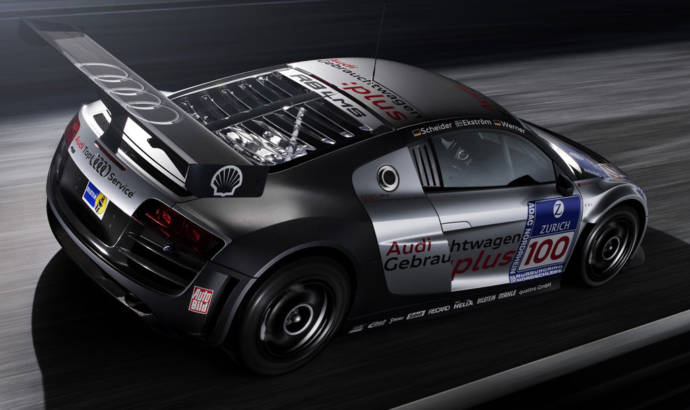 Audi decided that the Nurburgring 24 Hours endurance race will be the perfect place to test and then further develop the Audi R8 LMS. Two teams are ready to take on the famous track on May 23rd and 24th, the ABT Sportsline and Phoenix Racing with a total of four cars prepaired. Drivers were carefully selected and include four DTM Champions, four Le Mans winners and five drivers who have won the 24-hour race at the Nurburgring at least once.
The Audi R8 LMS that develops 500 horsepower thanks to its 5.2-liter FSI V10 participated in two racing competitions so far that already ended with a podium result.
Audi press release :
In the course of the further development of the Audi R8 LMS, an ultimate endurance test is on the agenda for the new GT3 sports car of AUDI AG at the end of May: On May 23/24, Teams ABT Sportsline and Phoenix Racing, with "factory" support by Audi, will field a total of four vehicles in the 24-hour race at the Nürburgring.
"The 24 Hours is not only one of the biggest motorsport events in Germany," says Head of Audi Motorsport Dr. Wolfgang Ullrich. "The Nürburgring-Nordschleife is considered one of the world’s toughest and most demanding race tracks. Similar to Sebring for the sports prototypes, it is superbly suited for revealing the final improvement potential of any new race car. This is exactly what we’re planning to do at the 24-hour race before delivering the R8 LMS to customers, starting this fall."
The Audi R8 LMS delivering some 500 hp has so far completed two "test" races as part of the BFGoodrich Endurance Championship on the Nürburgring-Nordschleife and already clinched a podium result in the process. Another "test" race is planned for May 2. On that day, the 14 drivers scheduled to contest the 24-hour race will be at the wheel of the four vehicles.
Teams ABT Sportsline and Phoenix Racing managed to form high-caliber driver squads consisting of five current Audi "factory" drivers, four DTM Champions, four Le Mans winners and five drivers who have won the 24-hour race at the Nürburgring at least once. All 14 drivers are regarded as outstanding endurance racers who are intimately familiar with the Nürburgring-Nordschleife.
They include the reigning DTM Champion Timo Scheider, who – together with his DTM teammate Mattias Ekström and three-time Le Mans winner Marco Werner – will compete for Team ABT Sportsline. On the occasion of the Audi brand’s 100th anniversary, their Audi R8 LMS will contest the event as car number 100. The second ABT Sportsline R8 will be driven by Christian Abt, Jean-François Hemroulle, Pierre Kaffer and Lucas Luhr.
Marc Basseng, Mike Rockenfeller and Frank Stippler will drive one of the two cars of Team Phoenix Racing. With the multiple Le Mans winners Frank Biela, Emanuele Pirro and Hans-Joachim Stuck as well as Marcel Fässler at the wheel, the second R8 LMS fielded by Phoenix Racing has a particularly prominent cockpit crew.
With three overall victories under his belt so far, Hans-Joachim Stuck, who has been the Motorsport Representative of the Volkswagen Group since January 2008, is one of most successful drivers of the 24-hour race. Lucas Luhr, Emanuele Pirro, Timo Scheider and Mike Rockenfeller have entered their names on the winners’ list of the endurance classic as well.
Also Team Phoenix Racing has already won the Nürburgring 24 hours. It triumphed at its home race in the Eifel region in 2003. The best result (second place) achieved by ABT Sportsline so far dates back to 2003 as well.
The 37th edition of the ADAC Zurich 24-Hour Race will start on Saturday, May 23, at 4 p.m. (local time). Practice sessions will be held on Thursday and Friday. The sports channel DSF will air extensive live coverage from the Nürburgring.
The Audi teams at the 24-hour race on the Nürburgring:
Audi R8 LMS #97 (ABT Sportsline)
Christian Abt (D)
Jean-François Hemroulle (B)
Pierre Kaffer (D)
Lucas Luhr (D)
Audi R8 LMS #98 (Phoenix Racing)
Marc Basseng (D)
Frank Stippler (D)
Mike Rockenfeller (D)
Audi R8 LMS #99 (Phoenix Racing)
Frank Biela (D)
Marcel Fässler (CH)
Emanuele Pirro (I)
Hans-Joachim Stuck (A)
Audi R8 LMS #100 (ABT Sportsline)
Mattias Ekström (S)
Timo Scheider (D)
Marco Werner (D) 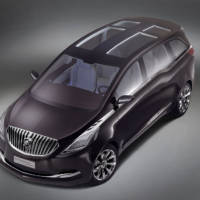 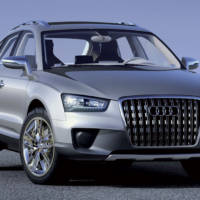