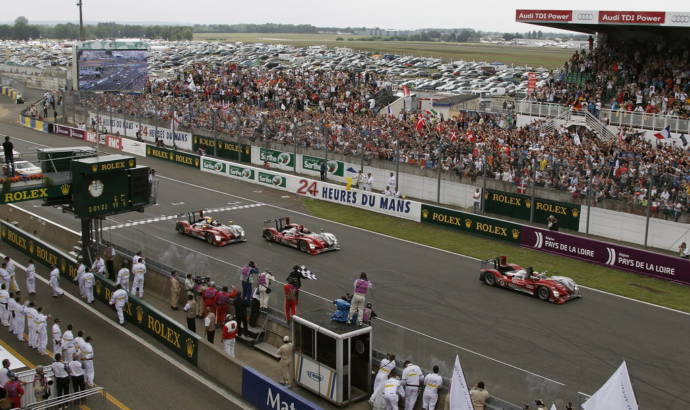 The Audi R15 TDI has claimed the first three positions at the 2010 Le Mans 24h race, achieving a victory against the Peugeot 908s which all faced mechanical problems.
This year’s winning Audi R15 TDIs represent the automaker’s first Le Mans expoit of the Variable Turbine Geometry, and the cars have reached record distances. Unfortunately for the Peugeot 908 cars, mechanical issues had forced each of them to stop before the race finish.
The first podium position claimed by the Audi R15 TDI was driven by Timo Bernhard (Germany), Romain Dumas
(France) and Mike Rockenfeller (Germany) who completed 397 laps
in the 24 hours, which means a distance of 5,410 Km.
Check out the official press release below for more facts and details regarding Audi R15 TDI’s victory at the 2010 Le Mans 24h race.
Audi press release :
INGOLSTADT, Germany,
Jun 13, 2010
–
For the ninth time Audi has won the legendary 24 Hours of
Le Mans and thus equalized Ferrari’s position in the roll of honor in
the French endurance classic. Only Porsche’s track record reflects more
victories.
At the 78th edition of the race, efficiency and reliability were the
decisive factors yet again – both are special fortes of the Audi brand
which has a reputation of developing highly efficient automobiles. The
three Audi R15 TDI cars of Audi Sport Team Joest ran without the
slightest technical problems over the entire distance and occupied the
top three places after the fastest Le Mans race of all time. After 2000,
2002 and 2004, Audi thus managed to achieve a one-two-three triumph at
Le Mans for the fourth time.
"Everyone at Audi can be proud of this historic exploit. Reliability,
efficiency and sustainability are particularly important topics for car
manufacturers today. And these are exactly the areas in which we have
demonstrated our expertise this weekend,” commented Audi Chairman Rupert
Stadler, who witnessed the captivating race live on location. "It was
one of the most thrilling races in Le Mans history, a do-or-die battle.
This one-two-three victory is the fourth 1-2-3 for Audi at Le Mans and
no doubt the most valuable victory claimed after the fiercest battle in
our company’s history. I express my thanks and great respect to the
entire squad. They have performed an incredible and flawless feat of
energy. Peugeot was a formidable rival who required us to give
everything. We express our respect to the French squad for this.”
"After taking third place last year, it was our declared aim to bring
the Le Mans trophy back to Ingolstadt and Neckarsulm, and we managed to
do this in an impressive way,” said Head of Audi Motorsport Dr. Wolfgang
Ullrich. "I’m incredibly proud of this squad and sincerely thank the
entire team and everyone who has contributed to this achievement.”
The ninth triumph – in total – of the brand at Le Mans was also made
possible by a technology which Audi Sport developed for racing during
the past three years in strict secrecy: the V10 TDI engine of the Audi
R15 TDI with an approximate power output of 440 kW has a turbo-charger
with Variable Turbine Geometry (VTG).
VTG turbo-chargers are standard with Audi TDI engines in production
vehicles. Their use at Le Mans helps the Audi engineers to continue to
develop the technology for smaller, highly efficient turbo engines to be
used in the future. "At Le Mans we’re dealing with temperatures above
1,000 degrees centigrade which have not been encountered with production
engines so far,” explains Ulrich Baretzky, Head of Engine Development
at Audi Sport. "As a result of downsizing, production development will
enter into similar temperature ranges. This makes VTG another good
example of how the technology transfer between motorsport and the
production side of the house works at Audi.”
In 2010 the demands made on diesel engines were particularly high due to
the restrictions imposed by the regulations. "Squeezing higher output
out of the engines without sacrificing reliability posed a great
challenge which our team mastered in an outstanding manner,” said Head
of Audi Motorsport Dr. Wolfgang Ullrich after the race. "We did not use
the full potential of the V10 TDI engine this year in order to be
absolutely on the safe side. That’s why it was clear to us even before
the race that we wouldn’t have the fastest car – but a very reliable and
efficient one. The development objective of the R15 plus was 20 percent
higher efficiency. We managed to achieve this. We’ve been working very
hard for this exploit over the past few months. This makes this success,
which was enabled by a perfect team performance as well, even more
rewarding.”
The victorious Audi R15 TDI with Timo Bernhard (Germany), Romain Dumas
(France) and Mike Rockenfeller (Germany) completed a total of 397 laps
in the 24 hours. With the covered distance of 5,410 kilometers, the trio
broke the 1971 record set by Dr. Helmut Marko and Gijs van Lennep in
the Porsche 917 that was considered unbeatable because the Hunaudières
straight at that time had no chicanes – another demonstration of the
performance capabilities of Audi TDI technology.
Timo Bernhard, Romain Dumas and Mike Rockenfeller drove an absolutely
flawless race on their way to their first Le Mans victory and the new
historic record. Except for a slow puncture shortly before the end of
the race and a right-hand mirror that had come off, the race went
without the slightest problems for the winners. Second place was taken
by Marcel Fässler, André Lotterer and Benoît Treluyer on whose R15 TDI
the front bodywork had to be changed twice after contact with the track
barriers.
The 2008 winners, Dindo Capello, Tom Kristensen and Allan McNish, who
were the best-placed Audi team in the early phase, were struck by major
misfortune. Le Mans record winner Tom Kristensen had to evade a slow GT2
vehicle on Saturday night and slid backwards against the track barrier
of the Porsche corners in the process. With fast lap times, Capello,
Kristensen and McNish pushed back into the group of the front runners
and in the end were rewarded with a podium result. 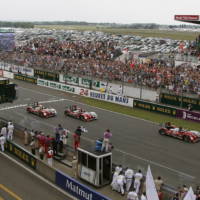 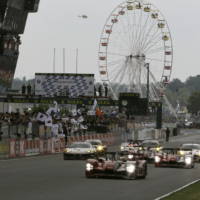 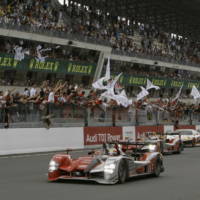 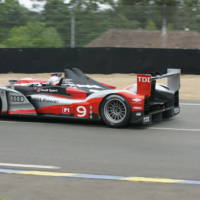 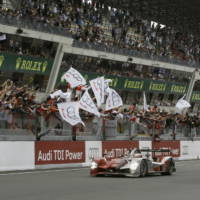 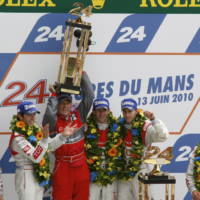 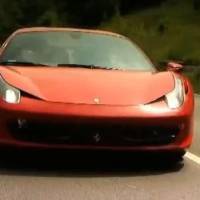 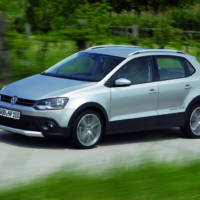