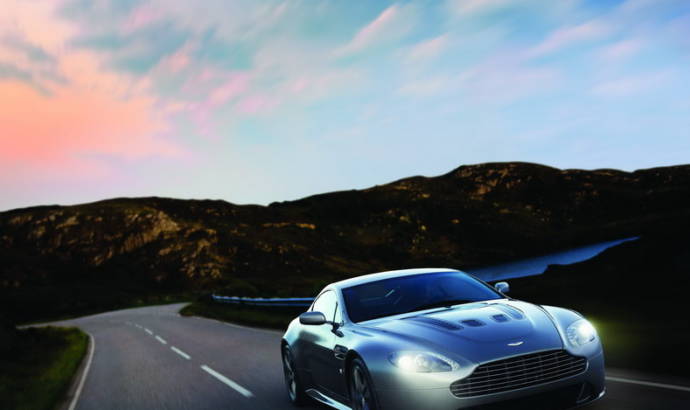 The British automaker has confirmed that their Aston Martin V12 Vantage will be heading to US, or more specifically to the North and South American markets in an exclusive production run.
The Aston Martin V12 Vantage extracts power from a 6.0-litre engine that outputs 517 PS (380 kW) and 570 Nm (420 lb-ft) of torque and is capable of accelerating from 0 to 60 mph (0 to 100 Km/h) in 4.2 seconds.
The Aston Martin V12 Vantage top speed is 190 mph (305 Km/h) and Dr Ulrich Bez said that the car represents "our most agile model with our most powerful engine".
Even though the Aston Martin V12 Vantage price for US was not announced, the British luxury sports car is already available for order and deliveries to the
Americas are expected to begin at the end of 2010.
Aston Martin press release :
Gaydon, 10 May 2010 – In response to unprecedented customer
demand, Aston Martin has confirmed that the V12 Vantage – the most
potent production sports car in the marque’s 96-year history – will be
made available in North and South America from later this year.
Based on the hugely successful V8 Vantage, the V12 Vantage features a
6.0 litre V12 engine producing 510 bhp (380 kW / 517 PS), and 420 lb ft
(570 Nm) of torque with a top speed of 190 mph (305 km/h) and a 0-62
mph (0-100 km/h) time of 4.2 seconds.
Originally launched in 2009, the V12 Vantage has quickly established
itself as a firm favourite with enthusiasts and media observers alike,
winning a series of accolades and praise around the world and proving a
huge sales success for the British marque.
Aston Martin Chief Executive Officer, Dr Ulrich Bez said: “This is
the ultimate performance interpretation of the Vantage range, combining
our most agile model with our most powerful engine. It represents the
definitive Aston Martin driving experience; providing spectacular
performance to ensure a dynamically thrilling drive in a highly
exclusive package.”
Although the originally small anticipated level of demand from the
Americas meant that the car would not be homologated for the market,
unprecedented demand from customers prompted an engineering study into
potential feasibility; with the strict brief that any changes could not
impact on the overall design of the car. Now just six months later, a
series of engineering refinements have been introduced to satisfy the
specific requirements of the American market.
Benefiting from the modular nature of the VH architecture, the Aston
Martin engineering team were able to review the virtual and physical
testing data for all modern era Aston Martins. Following this study a
detailed Computer Aided Engineering (CAE) analysis resulted in the
development of an alternative load transfer path, incorporating an
innovative version of the structure at the front of the car, which now
satisfies North and South American requirements.
Aston Martin Chief Commercial Officer, Michael van der Sande
commented:  “We are very pleased to be able to respond to customer
demand and launch this car in the Americas – still our biggest market
globally.
“This illustrates one of Aston Martin’s key strengths – the ability
to act quickly and turn concepts and ideas into reality, giving our
customers what they want.”
For launch in the Americas, the Aston Martin V12 Vantage will also be
available in a highly desirable and strictly limited Carbon Black
special edition.
This new special edition adds a typically understated flair to V12
Vantage. On the exterior, the car features a bespoke Carbon Black
metallic paint with a subtle metallic twist to create a deep rich
patina; painstakingly created through a hand painting process taking 50
man hours. The iconic Aston Martin side strake has been fashioned from
real carbon fibre backed by a black mesh and complimented with gloss
black 10 spoke diamond turned alloy wheels. A bright finished grille and
front parking sensors (normally an option) complete the exterior
detailing.
Inside, owners will be greeted to swathes of Obsidian Black leather
highlighted with a contrast silver coarse stitch all hand stitched by
the craftspeople at Gaydon – Aston Martin’s global headquarters in
England. Also featured are a Piano black facia trim, centre stack and
centre console, anodised black tread plates and unique sill plaques
build on the carbon theme. The normally optional Aston Martin 700w
Premium Audio System is delivered as standard equipment.
Designed for the focused driver, every component of the V12 Vantage
has been honed with pure driving enjoyment in mind. Benefiting from
race-developed materials and components; performance and agility have
been tuned to perfection.
The latest incarnation of the Vantage family has been designed to
provide a unique character, appealing to different driver tastes and
complementing the other models in the current Aston Martin line-up.
Visually enticing, the V12 Vantage expresses its performance
potential through its purposeful stance created by enhanced aerodynamic
and cooling aids optically widening the car, while retaining traditional
understated Aston Martin design. Equally inviting, the cosseting
interior permits the driver to extract maximum performance ability from
the car while also enjoying customary levels of Aston Martin comfort on
longer journeys. High levels of power and torque are available at all
engine speeds making the V12 Vantage responsive and tractable in any
driving situation.
The V12 Vantage is as at home on the track as it is on the road; last
year as the final engineering durability test for the car, a
near-standard specification V12 Vantage competed in the gruelling
Nürburgring 24-hour race driving to a class victory at the hands
representatives from the company’s engineering team, including CEO Dr
Ulrich Bez. A similar V12 Vantage is set to compete in the 2010 race on
15/16 May.
The V12 Vantage is built at Aston Martin’s global headquarters in
Gaydon, Warwickshire joining the DBS, DB9 and V8 Vantage model lines
which are built in the state-of-the-art production facility combining
hi-tech manufacturing processes with traditional hand-craftsmanship.
The V12 Vantage is available to order now and deliveries to the
Americas are expected to commence during quarter four 2010 with prices
to be confirmed in the coming weeks.
Aston MArtin V12 Vanatage Video : 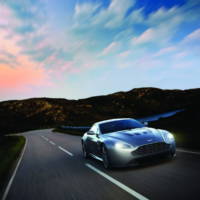 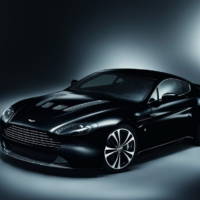 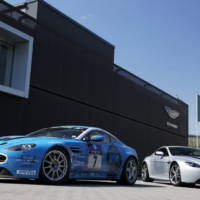 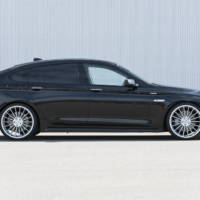 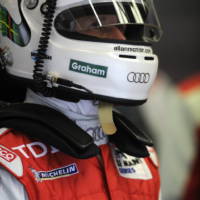