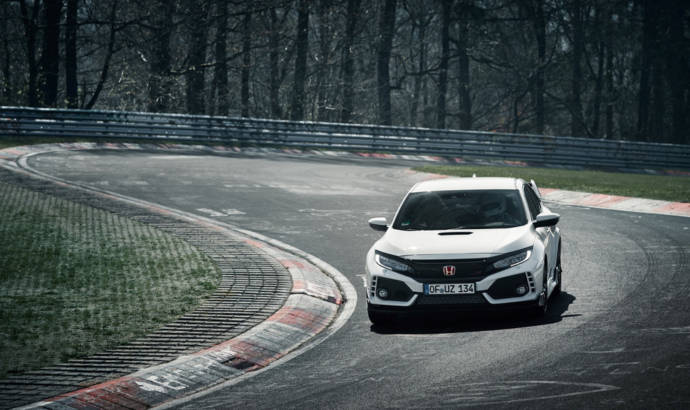 There is a constant battle between manufacturers of compact hot hatches. They always try to improve their times on the Nurburgring pushing harder and harder when launching a new model. Honda is one of the examples, with its recently launched Civic Type R, a car that was unveiled during this March Geneva Motor Show.

The new Civic Type R has set a new benchmark lap time for front-wheel drive cars at the Nürburgring Nordschleife. On 3 April 2017, a development car lapped the world-famous circuit in 7 minutes 43.8 seconds.

The lap time was achieved during the final phase of the model’s testing regime, on a dry track with an optimum ambient temperature for the best tyre and powertrain performance. The new time represents an improvement of nearly seven seconds compared to the model’s predecessor.

The new Civic Type R was part of the all-new tenth-generation Civic’s development programme – the largest in Honda’s history. Several factors contributed to the new Civic Type R’s new benchmark time at the Nordschleife. At its heart is the optimised 2.0-litre VTEC TURBO engine, producing 320 hp and 400Nm of torque. New lower gear ratios in the six-speed manual transmission further improve the car’s acceleration, while the new Type R‘s aerodynamic package delivers high-speed stability, with a best-in-class balance between lift and drag.

The high-rigidity body frame of the all-new Civic Type R is 16kg lighter than the previous model’s, with a torsional stiffness improvement of 38%, which provides significant benefits to steering response and cornering stability. New multi-link rear suspension enhances stability under braking and reduces the total roll movement of the car. 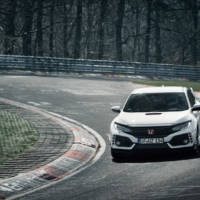 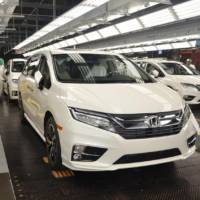