General Motors is the first manufacturer to announce a world premiere for the 2013 North American International Auto Show. It will pull the covers off the seventh generation Chevrolet Corvette on Sunday 13 January.
Along the announcement, GM also released the new Crossed Flags logo for the 2014 Corvette C7 and with it, a dedicated website at www.one13thirteen.com.

Ed Welburn, GM vice president of global design, stated that “the all-new, seventh-generation Corvette deserved an all-new emblem. The new Crossed Flags design reflects the character of the next Corvette. The flags are much more modern, more technical, and more detailed than before, underscoring the comprehensive redesign of the entire car.”

Before choosing the right logo, GM officials had to look over at more than 100 variations of the Crossed Flag logo, since its introduction in 1953.

“With the new Corvette, we set out to build a world-challenging sports car with design, refinement, efficiency and driver engagement that is second to none. The result is a truly all-new Corvette. There are only two carryover parts from the C6 used in the C7 – the cabin air filter and the rear latch for the removable roof panel”, stated Tadge Jeuchter, Corvette chief engineer, in its intention to tease out attention. 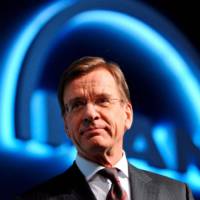 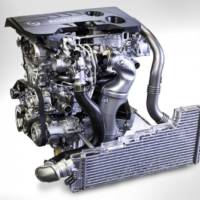