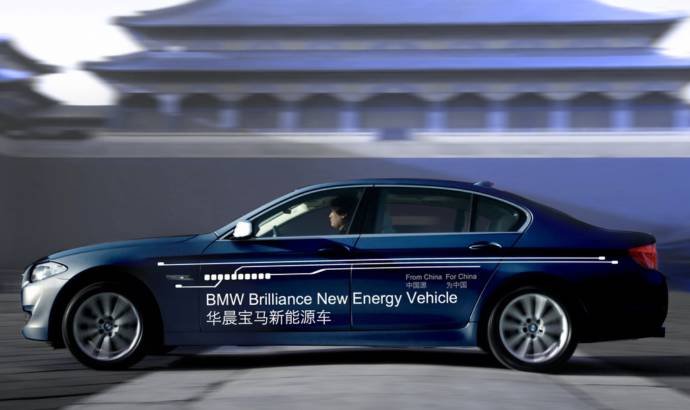 The 2013 BMW 5 Series Plug in Hybrid represents the result of BMW teaming up with Brilliance Automotive who created a prototype for the premium segment which is going to enter production within two years.
Based on the long wheelbase version, the 2013 BMW 5 Series Plug in Hybrid is going to be unveiled at this year’s Auto Shanghai, and in case you are getting your hopes up, this new model will be available to the Chinese market only.
The car’s parallel hybrid set-up is composed from a 160 kW combustion engine which features BMW’s TwinPower Turbo technology and an electric motor adding an extra 70 kW. This electric motor is linked to a high-voltage battery placed in the luggage compartment, and just like every plug-in hybrid, recharging the car will only require a regular power supply.
According to BMW, the 2013 5 Series Plug in Hybrid is able to run for up to 75 Km on just electricity, at speeds of up to 60 Km/h, and when the combustion engine kicks in, the car’s range can reach 400 Km.
BMW press release :
Auto Shanghai 2011: BMW Brilliance Automotive presents prototype of a plug-in hybrid sedan.
Munich/Shanghai. In the run-up to the international automobile trade show Auto Shanghai 2011, BMW Brilliance Automotive presents the concept of a premium-segment plug-in hybrid sedan. In collaboration with its joint venture partner Brilliance China Automotive Holdings Ltd. BMW Group has thus taken the next step of the way towards creating the new energy vehicle for China. The prototype is based on the long wheelbase version of the BMW 5 Series Sedan, developed exclusively for the Chinese automobile market and produced at the Shenyang site. It is the first vehicle in its segment in China to provide a fully fledged combination of exclusive style and environmental awareness. In this way, it closes the gap in the high-end area while at the same time laying the foundation for the future development of a Chinese new energy vehicle in the premium segment. Its drive parallel hybrid drive set-up combines a combustion engine featuring BMW TwinPower Turbo technology with an electrical motor. The innovative concept also includes special battery technology which includes the possibility of charging from a mains power supply.
The prototype of a plug-in hybrid sedan is part of the BMW Group’s electromobility strategy for China. The road map for a new energy vehicle presented at Auto China 2010 in Beijing includes the consistent expansion of both development expertise and value-creation potential in China. The BMW Group is running a number of projects to support the market launch of electrically powered vehicles in China. The very first German-Chinese research project, a co-operative venture with Tongji University in Shanghai, saw the development of a purely electrically powered BMW 5 Series in the long wheelbase version. The worldwide MINI E fleet trial was extended to China at the beginning of the year, involving the sites of Peking and Shenzhen. The MINI E is being tested for everyday use at these locations by a consortium made up of the energy partners State Grid Corporation and Southern Grid as well as the China Automotive Technology and Research Corporation (CATARC). This also applies to field testing of the BMW ActiveE. This purely electrically powered vehicle based on the BMW 1 Series Coupé will be put to use in China in the course of this year.
With its extensive field testing in the most important automobile markets, the BMW Group is gathering insights into user behaviour and the requirements of local supply infrastructure. The experience thus gained is being fed both into the BMW Group’s global electromobility strategy and the development of the new energy vehicle for China.
With the plug-in hybrid vehicle based on the BMW 5 Series Sedan in the long wheelbase version, BMW Brilliance Automotive now has the concrete outcome of this strategy. Series production of the automobile is to start in China in 2013.
The properties of the plug-in hybrid vehicle are geared closely towards the demands of the Chinese automotive market. The prototype provides ride comfort, luxurious ambience and interior space at the same level as the long wheelbase version of the BMW 5 Series Sedan which has been so successful in China. When running purely on electrical power, it is possible to travel emission-free for up to 75 kilometres m/h at a constant speed of 60 km/h. Use of the combustion engine provides a minimum additional range of 400 kilometres, which is in line with the driving profile of Chinese customers in the premium segment.
The parallel hybrid set-up consists of a 160 kW combustion engine featuring BMW TwinPower Turbo technology and an electrical motor with a maximum output of 70 kW, thereby ensuring characteristic BMW driving dynamics and ground-breaking efficiency. The electrical motor draws its energy from a high-voltage battery housed in the luggage compartment which can be charged via the mains power supply.
The model-specific components for the plug-in hybrid drive, power electronics and high-volt battery were developed in close collaboration between the joint venture partners BMW Group and Brilliance China Automotive Holdings Ltd. The project drew intensively on the drive expertise of the BMW Group as well as the know-how built-up in China in the field of electromobility so as to take account of the latest technological innovations and also tap into scientific insights regarding the potential uses of a new energy vehicle. 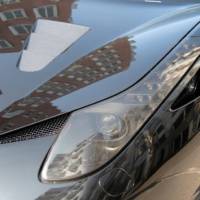 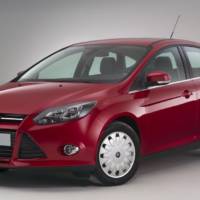