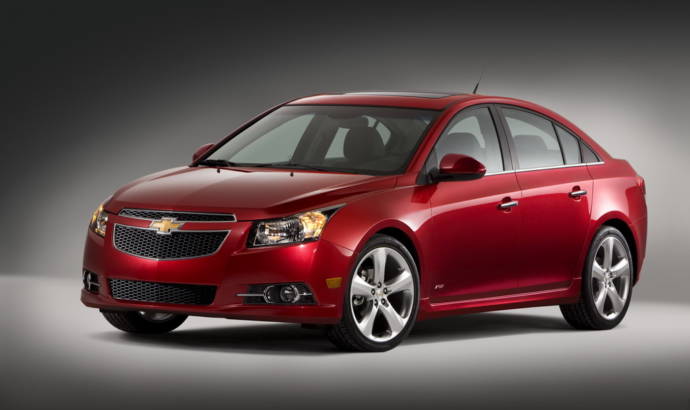 Besides offering a preview with the 2011 Cadillac CTS-V Wagon , GM has also scheduled two other debuts for the 2010 New York Auto Show, and these are the 2011 Chevrolet Cruze Eco and RS versions.

Thanks to this engine the 2011 Chevrolet Cruze Eco promises to return 40 mpg (highway) and some of the other fuel reducing measures that have been taken include various aerodynamics improvements, a lowered ride height and lightweight alloy wheels wrapped in ultra-low rolling resistance Goodyear tires.

As for the 2011 Chevrolet Cruze RS the manufacturer wants to enhance the vehicle’s appearance by offering a slightly redesigned front fascia, with new rocker moldings, new spoiler and fog lamps as well as a series of discrete upgrades at the interior.

Pricing for the 2011 Chevrolet Cruze Eco and RS versions was not announced.

NEW YORK – At the New York Auto Show, Chevrolet reveals the
compact 2011 Cruze Eco. This high-efficiency model is powered by a 1.4L
Ecotec turbocharged engine with variable valve timing that achieves an
estimated 40 mpg on the highway when combined with a six-speed manual
transmission. Cruze Eco is expected to deliver the best fuel economy in
the compact segment, while offering midsize car presence.
“The Cruze Eco delivers hybrid-like efficiency without the price
tag,” said Jim Campbell, U.S. vice president Chevrolet marketing.
“Along with the Volt electric vehicle, it demonstrates how Chevrolet is
working to bring new products to market that range from gas-friendly to
gas-free.”
Chevrolet also shows an optional RS sport appearance package for the Cruze LT and LTZ trim levels.
Cruze is the first in a family of all-new Chevrolet small and
compact cars designed to offer excellent fuel economy, outstanding
quality and top safety ratings. Cruze models for the United States and
Canada will be produced at the Lordstown, Ohio assembly complex. In
February, Chevrolet announced the addition of a third shift at
Lordstown that will add 1,200 workers to support a smooth, fast and
flawless ramp-up of Cruze production. More than $350 million has been
invested to re-tool the plant and add new, state-of-the-art
manufacturing equipment.
“This investment helps secure the best possible manufacturing
footprint to react to market demand and deliver vehicles faster to our
customers,” said Campbell. “We believe Cruze is the right car at the
right time for American consumers.”

Cruze Eco details
Featuring a 1.4L Ecotec turbocharged
engine with variable valve timing, the Cruze Eco is designed to be the
most fuel-efficient model in the lineup, delivering an estimated 40 mpg
on the highway with the standard six-speed manual transmission. City
fuel economy, as well as estimates for the Cruze Eco equipped with an
available six-speed automatic transmission, will be finalized closer to
launch.
The Eco achieves greater fuel economy using a number of features
that enhance its aerodynamics, minimize weight and reduce rolling
resistance. Details include:

Cruze RS details
Complementing Cruze’s sporty proportions
is an optional RS appearance package for the LT and LTZ trim levels,
which bolsters the car’s styling with unique fascias, rocker moldings,
rear spoiler and fog lamps. An uplevel instrument cluster is also part
of the package and includes chrome accent rings in place of the
standard silver finish, as well as opaque cluster bezels that allow the
cluster’s ice blue backlighting to shine through – providing a sporty
nighttime appearance.
“For customers who want even more personality and presence in their
vehicle, the RS appearance package builds on the already bold face and
coupe-like proportions of the Cruze,” said Michael Simcoe, executive
director, North American Exterior Design.

Midsize presence in the compact segment
All Cruze models
offer the spaciousness and amenities of a midsize car, combined with
segment-leading features and details that challenge preconceived
notions about what a compact car can be in North America.
Along with the Eco, the 2011 Cruze will be offered in LS, LT and LTZ trims. Standard and available equipment includes:

All models share an interior characterized by upscale materials and
a lengthy roster of equipment usually found in larger and more
expensive vehicles. Available technologies include Bluetooth and a
navigation system.
Cruze’s 1.4L Ecotec turbo performs like a larger engine when needed,
but retains the efficiency of a small-displacement four-cylinder in
most driving conditions; it is standard on Eco, LT and LTZ models.
Rated at an estimated at 138 horsepower (103 kW) and 148 lb.-ft. of
torque (200 Nm), it enables a cruising range of more than 500 miles
(800 km). Cruze will lead the way for Chevrolet in the use of
small-displacement, turbocharged Ecotec engines that are highly
fuel-efficient and power vehicles that are fun to drive.

Standard on LS models is a 1.8L Ecotec four-cylinder rated at
an estimated 136 horsepower (184 kW) and 123 lb.-ft. of torque (166
Nm). Both engines are designed with fuel efficiency in mind, including
technology such as variable valve timing that optimizes performance and
fuel economy.
Backing the Cruze’s engines are six-speed manual and automatic transmissions. Each contributes to excellent fuel economy.
Chevrolet engineers have already logged more than 4 million miles in
quality and durability testing worldwide, making Cruze one of the most
real world-tested products prior to a U.S. launch. It is backed by
Chevrolet’s five-year/100,000-mile powertrain warranty – the best
coverage in America. 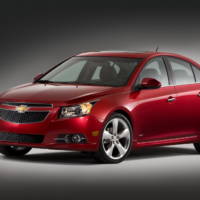 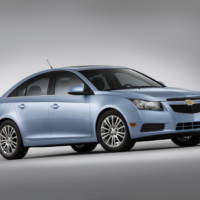 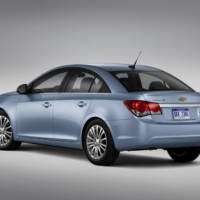 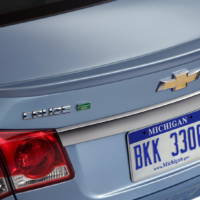 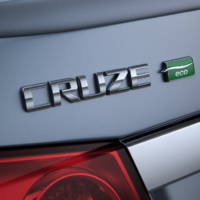 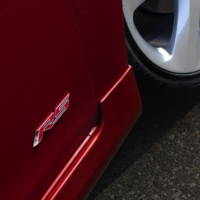 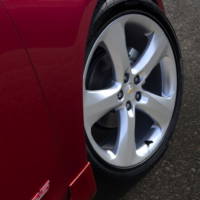 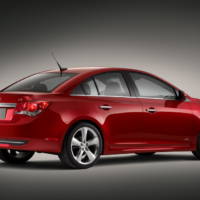 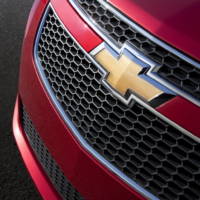 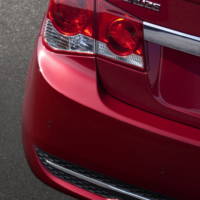 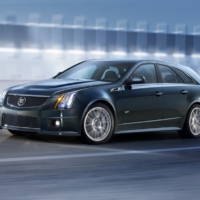 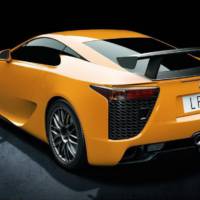