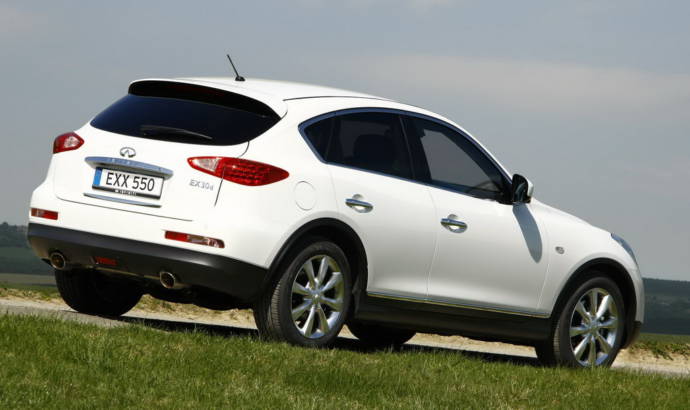 The 2010 Infiniti EX30d is the company’s second diesel model to be introduced on the UK market.
Performance and fuel efficiency figures indicate that the 2010 Infiniti EX30d equipped with its piezo-injection 3.0-litre V6 diesel engine is able to output 238 PS (235 bhp) and 550 Nm (406 lb-ft) of torque at 1,750 rpm.
The 2010 Infiniti EX30d takes 7.9 seconds to accelerate from nought to 62 mph, reaches a top speed of 137 mph and in a combined cycle the crossover returns 33.2 mpg with CO2 emissions of 224 grams per Km.
Standard features on the entry level 2010 Infiniti EX30d includes the Adaptive Shift Control
(ASC) 7-speed automatic transmission, active torque distribution
all-wheel drive, Xenon cornering headlights, parking
sensors, 18-inch alloys, Scratch Shield self-healing paint, cruise
control and a 7-speaker audio system.
The 2010 Infiniti EX30d price starts at 35,975 GBP and reaches 41,220 GBP for the GT Premium version.
Infiniti press release :
ROLLE, Switzerland (May 20, 2010) – Infiniti has only just announced
the prices of its first diesel, the FX30d.  Now it is the turn of its
second.  To be badged EX30d and priced from £35,975, this crossover
promises to raise the bar for diesel engine refinement and vehicle
safety as well as delivering Infiniti’s greenest environmental
performance to date.
The EX30d also brings a new high-value proposition to the market
thanks to prices, announced today, that are lower than the
petrol-fuelled equivalent. On sale from early July, the EX diesel models
are expected to account for eight out of every 10 EX sales.
At the top of the line-up is a new GT Premium version equipped as
standard with a suite of innovative safety technology, some of it only
just made available for the first time on any Infiniti in Europe. The
package includes features that return the car to its correct lane on the
motorway and give the driver warning of impending collisions – features
that some companies do not offer at any price.
Despite more engine torque than even Infiniti’s potent petrol V8, and
a breathtaking open-road performance as a result, the EX30d delivers
more miles per gallon and emits less CO2 than the petrol EX
models – and all with no dilution of the sporting coupé style and sheer
driver appeal for which the EX is already known.
Headline numbers to please both the head and the heart include:

The piezo-injection 3.0-litre V6 diesel engine providing such
exceptional breadth of capability has been developed to meet Infiniti’s
uncompromising requirements. With 238 PS (235 bhp), Infiniti’s
first-ever diesel engine is a match for any single-turbo diesel in the
class. Its massive torque output is class best, guaranteeing performance
as effortless as it is muscular.
Uniquely, the V6 features a compacted graphite iron (CGI) block – a
weight-saving solution that also provides one of the EX30d’s greatest
strengths – its refinement. The focus of a massive engineering effort,
the V6 sets a new benchmark among diesel engines in its class for low
noise and vibration. It has even been tuned to sound like a sporting
petrol engine.
The EX30d is complemented in the newly expanded EX line-up by the
more luxury oriented EX30d GT model and Infiniti’s new top grade, GT
Premium, which is available in the EX range for the first time.
Introduced in response to customer demand, GT Premium models include the
brand’s most sophisticated new safety and convenience features as
standard and set a new benchmark in luxury crossover value.
Like the petrol variants, every EX diesel is exceptionally well
equipped. The entry EX30d comes as standard with Adaptive Shift Control
(ASC) 7-speed automatic transmission, active torque distribution
all-wheel drive, Xenon cornering headlights, front and rear parking
sensors, 18-inch alloy wheels, Scratch Shield self-healing paint,
electrically adjustable front seats, power-fold rear seats, cruise
control and a 7-speaker audio system with 6-CD changer, MP3 decoder,
Aux-In and Bluetooth for mobile connectivity.
The EX30d GT adds leather upholstery, 10-way power driver’s seat with
memory, 8-way power front passenger seat, electrically adjustable
steering column, heated front seats, rear air conditioning vent and a
jacket hanger.
The new EX GT Premium, available in both EX30 diesel (£41,220) and
EX37 petrol (£41,080) forms, combines the features of the GT with
technology from Infiniti’s innovative Safety Shield program, such as
Intelligent Cruise Control (ICC) with full speed range, Intelligent
Brake Assist (IBA), and Forward Collision Warning (FCW), to which is
added the Connectiviti+ infotainment package.
ICC ensures a safe distance to the car in front while the cruise
control is operating. When cruise control is off – the majority of the
time for most drivers – a combination of IBA and FCW remains constantly
on alert, not just warning the driver of insufficient distance to the
vehicle in front but pre-loading the powerful all-disc braking system in
readiness for an emergency stop, should that become necessary.
Another safety bonus, for the diesel model only, is the standard
inclusion in the EX30d GT Premium of Lane Departure Prevention (LDP),
available in Europe for the first time. Unlike rival systems which
merely warn the driver if the car strays out of a designated traffic
lane, Infiniti’s LDP gives a warning but crucially will then take action
if that warning is not heeded. Gentle brake pressure on one side of the
car guides the vehicle back into the correct lane. LDP functions only
above 45 mph and is automatically over-ridden by use of the indicators.
The system can also be turned off by the driver if desired.
Every GT Premium model also features Around View Monitor (AVM), with
its 360-degree bird’s eye view of the car and its surroundings, and the
acclaimed Connectiviti+ satellite navigation system. Four times faster
than the previous DVD satnav, the 30GB hard disk drive offers utmost
user friendliness and highly advanced functionality – including 3D
graphics on the high-resolution touch screen, access to Michelin Green
Guide tourist information and gastronomical Red Guide, and automatic
warnings of fixed-position safety cameras (not all markets).  Instead of
a CD changer for six discs Connectiviti+ boasts a 10GB Music Box – to
store music from up to 300 CDs.
It is expected that, throughout Europe, the new GT Premium versions
will become Infiniti’s top selling models.
The new specification structure, to be rolled out across all of
Infiniti’s ranges, reflects feedback from the market and results in even
fewer extra-cost options. EX options now centre on a Bose® 11-speaker
Premium Sound System (£615, only with Connectiviti+), electric glass
sunroof (£820) and polished aluminium roof rails (£255). Connectiviti+
satnav system is available as an option on non Premium models for £1735.
Prices for the full range of 2010 EX models are as follows:

The diesel models can be identified by a reprofiled front bumper with
extra air intakes to meet the different cooling requirements of the new
engine. It is the only external change for a design hailed as the
pioneer coupé crossover, as well as one of the best looking.
Coupé looks, sports car driver appeal, luxury refinement,
ground-breaking safety features and reduced fuel consumption and CO2
emissions, the new diesel Infiniti EX models for 2010 are available
from Infiniti Centres from July. 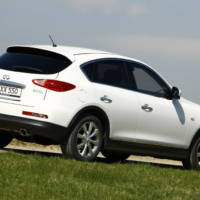 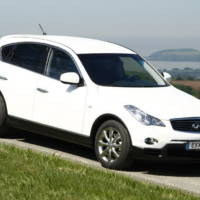 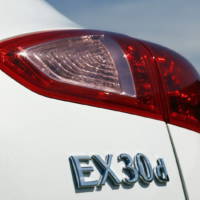 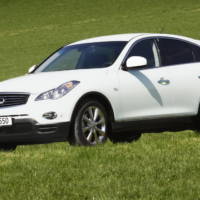 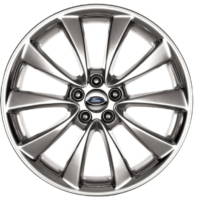 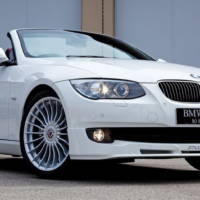