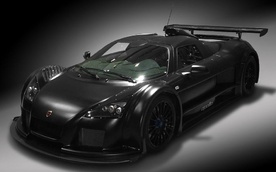 German supercar manufacturer Gumpert announced it will introduce a new power package for their further developed Apollo Sport, at the Geneva Motor Show next week.
The 2010 Gumpert Apollo Sport received an improved cooling system and output has increased from 700 HP (515 kW) to 750 HP (551 kW) which means more than 180 HP per litre.
Also the 2010 Gumpert Apollo Sport features an electronic gear system with F1 inspired rocker switches placed on the steering wheel that shifts gears in maximum 40 milliseconds.
It will be interesting to see the 2010 Gumpert Apollo Sport lap the Nurburgring race track, as the previous version registered a lap record of 7:11.57 minutes.
More details with the 2010 Gumpert Apollo Sport at the time pf the show.
Gumpert press release :
The new GUMPERT power package will be on show for the first time at the 80th Geneva Motor Show: two impressive versions of the further developed apollo sport, in contrasting black and white.
Optimised engine control, new recirculation valves and improved cooling have now improved the performance of the German Altenburg-built racing car to 750 hp/551 kW (previously 700 hp/515 kW). This increase in performance of more than seven percent can be felt above all on curved and fast stretches of road. The power per litre therefore increases to more than 180 hp per litre of cylinder capacity!
Extremely short gear shifts of up to 40 milliseconds (torque-to-torque) are provided with precise transmission from the apollo TT40e (electronic gear system), with faster gear changes thanks to rocker switches on the steering wheel. The Formula 1-type technology promises drivers spoilt by the apollo the ultimate in comfort along with their adrenaline rush. The apollo’s outstanding performance on the track and its excellent lateral acceleration, thanks to maximum surface pressure and grip in all driving situations, remains unaffected by this. A further highlight is the launch of the first apollo right-hand drive vehicle. Yet a further reason for an international push!
With its supreme driving performance, the apollo recently became a test champion (Supertest “sports auto”, 11/2009).
The new lap record of 7:11.57 minutes recorded on the Nordschleife of the Nuerburgring track is an impressive indication of the super sports car’s claim to be the best. Driving enthusiasts with sporting ambitions will note the improved ergonomics of the vehicle thanks to its extended monocoque and the larger adjustment area of the pedals.
“Although the apollo demonstrates its strengths above all on the racetrack, with its optimum aerodynamics and resulting breathtaking curve speed, it is largely suitable for day-to-day use, as proved by tests conducted by a number of independent car magazines. We think of the driver and his comfort…” confirms Roland Gumpert, founder and Managing Director of GUMPERT Sportwagenmanufaktur.
The LED daytime running lights ensure clear conditions in temporary traffic. In the course of reducing the vehicle’s drag coefficient, the front and tail now have a significantly more striking and forceful design, making the apollo seem more aggressive. A completely re-designed flap-controlled exhaust system with two times two tail pipes produces an unmistakeable earthy sound. In addition flaps in the tail area ensure optimised down force, something that has always been a priority of the apollo. The integration of a brand-new reinforced CIMA gearbox (apollo S1000) into the apollo sport now gives it improved reliability in long-distance races. Further innovations in 2010: a considerably improved CD/DVD player sound system and a central flashlight for motor racing on the redesigned tail. 2 ravishingly exquisite apollo sport await you in Geneva to satisfy your curiosity in Hall 2 on stand 2045! 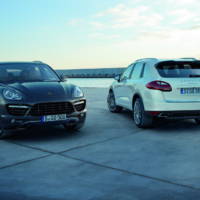 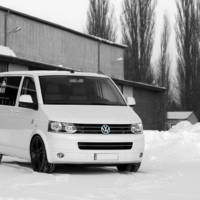