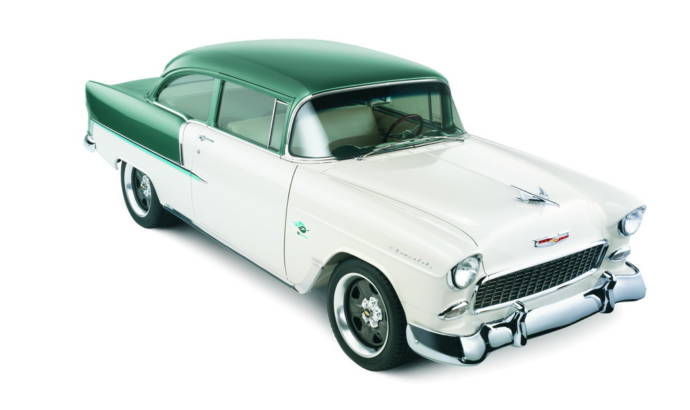 GM Performance Parts will bring this 1995 E-ROD Chevy at the Barrett-Jackson Orange County auction on June 25-27.
Powered by a 6.2-litre V8 LS3 unit featuring a crate engine package, the GMPP 1995 E-ROD Chevy produces 430 HP and is able to pass California’s emission requirements due to its emission equipment and supporting components.
Some of these components include catalytic converters and a fuel tank evaporative emissions canister and are available for both manual or automatic equipped cars.
The GMPP 1995 E-ROD Chevy crate engine packages are priced at 9,375 USD and the automaker says it will offer more E-ROD packages in the near future.
GM press release :
GRAND BLANC, Mich. – GM Performance Parts (GMPP) groundbreaking E-ROD, a ’55 Chevy powered by the innovative, new E-ROD crate engine package, will highlight GMPP participation in the Barrett-Jackson Orange County auction June 25-27.
The E-ROD crate engine package includes a complete LS3 engine, emissions equipment and supporting components that enable classic cars to pass California’s stringent emissions tests.
No other original equipment or aftermarket manufacturer offers a comparable, emissions-compliant system.
"The E-ROD was introduced at the ’09 SEMA Show with industry-wide approval," said Jamie Meyer, product marketing manager for GM Performance Parts. "Since then, we’ve traveled to every speed shop, cruise night and car show in California, spreading the word about our California emissions-compliant 430-horse crate engine package. We’re looking forward to meeting the bidders at Barrett-Jackson and giving them some ideas about how they can have this same level of technology in their next project car build."
The core of the E-ROD package is the LS3 6.2L V-8 engine, rated at 430 horsepower. Emissions equipment with the package includes catalytic converters, a fuel tank evaporative emissions canister and more.
GMPP worked closely with California Air Resources Board (CARB), California’s Bureau of Auto Repair (BAR) and Specialty Equipment Market Association (SEMA) to develop the kit for “specially constructed vehicles” in California. The E-ROD package is also emissions-compliant for OBD-1 (1995) and earlier model vehicles.
E-ROD crate engine packages for automatic- or manual-transmission applications are available now through GM dealers, authorized GMPP retailers and via the GMPP Web site, www.gmperformanceparts.com. The list price for both versions is $9,375.
GM Performance Parts will introduce more E-ROD packages in the near future.
American Heroes Chevelle
One of the highlights of the Barrett-Jackson Orange County auction will be the sale of Super Chevy’s "Project American Heroes" 1970 Chevrolet Chevelle. It’s the latest in a series of American Heroes projects built to help raise funds and awareness for the Armed Forces Foundation, an organization dedicated to providing direct financial support and other assistance to armed forces personnel.
GMPP is the official engine provider of the project and donated an LSA 6.2L supercharged crate engine to the cause. The LSA crate engine is based on the production engine of the Cadillac  CTS-V and is rated at 556 horsepower. The engine was installed by the car’s builder, Route 66 Motorsports, in Illinois.
"The Project American Heroes Chevelle is a humbling project to be a part of," Meyer said.  "Super Chevy magazine has again done a great job of not only building a great car, but also helped drive awareness about a charity that all Americans can be proud of.  With a 556-horse LSA crate engine, we feel that GM Performance Parts has provided the level of power that such a tribute car deserves."
Super Chevy launched the Project American Heroes series in 2007 with a ’57 Chevy convertible that brought a $130,000 donation to the Armed Forces Foundation. Super Chevy editor Jim Campisano and others affiliated with the project will be on hand during the auction to help encourage the most generous bids for this very special Chevelle.
Televised coverage of the Barrett-Jackson Orange County auction begins Friday, June 25, at 5 p.m. Eastern Time (2 p.m. Pacific Time) on SPEED. The televised sale of the Project American Heroes Chevelle is scheduled for Saturday, June 26, at approximately 9 p.m. Eastern Time (6 p.m. Eastern Time).
GMPP at Barrett-Jackson
GM Performance Parts will play an interactive role at Barrett-Jackson’s Orange County event, with updates posted throughout the weekend on GMPP’s Facebook page. Search "GM Performance Parts" on Facebook to follow the updates.
Enthusiasts who crave the latest technology, maximum horsepower and the expertise and confidence backed by GM, can purchase GMPP crate engines, blocks, heads, high-performance transmissions and components from GMPP Authorized Center dealers or any other GM dealership nationwide. To shop for GMPP products, or for more information, visit www.gmperformanceparts.com. 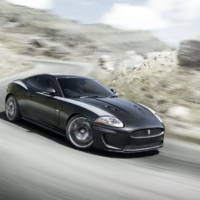 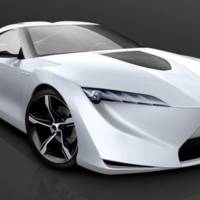